Svyatogorsk gap: Kiev is preparing an ecological catastrophe in Donbass 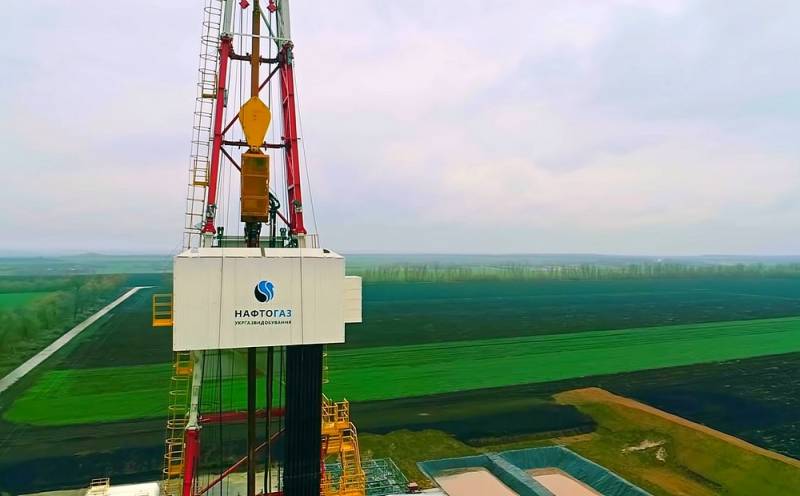 To all the troubles of the long-suffering Donbass, which has been tormented by the war for the eighth year, has been added one more. NJSC Naftogaz of Ukraine announced the start of the "commissioning" of the Svyatogorsk natural gas field, which is part of the so-called Yuzovskaya site, where American and British companies were going to extract shale gas even before the "Maidan" and the 2014 coup d'etat. It is necessary to immediately dot the "i" - the plans of "Naftogaz" do not bode well both for the residents of those regions where production has already begun, and for those where it is planned to be deployed in the future.


Moreover, it is completely incomprehensible what we see in front of us in this case: economic a scam of Kiev, its attempt to turn the situation in the East of the country in this way, or simply the desire to complicate the life of the rebellious region to the maximum?

Odyssey of the Yuzovskaya site

This story, which in its duration stretches to a full-fledged epic, takes its beginning in the seemingly epic "pre-Maid" times. It was then, in May 2012, that the State Service of Geology and Mineral Resources of Ukraine held a tender, as a result of which Shell received the rights to extract shale gas on the territory of the so-called Yuzovskaya site - a gas-bearing shale field located in the Donetsk and Kharkiv regions. At the same time, which is typical, its competitors were ExxonMobil and TNK-BP.

This situation subsequently gave rise to many conspiracy theories, according to which the Americans just staged a Maidan in 2013-2014 "in revenge" for this defeat. Or - for the reason that Yanukovych, "turned to Moscow," was going to revise the results of the tender and give the deposit to the Russian TNK. Whether there is even a drop of truth in these versions, now no one will say. Well, except that the ability of the Yankees, for the sake of decent hydrocarbon reserves, to arrange a coup or a war anywhere in the world is really beyond doubt ... And the reserves of "shale" gas stretching for almost 8 thousand square kilometers of the field, according to the estimates of the State Geonedra "nezalezhnoy", are really impressive - from 2 to 4 trillion cubic meters. At one time it was believed that it could well produce up to 10 billion cubic meters of "blue fuel" per year. And yet, despite this, the development of the Yuzovskaya site was never started. The British and the Dutch waited patiently until the end of 2014. Initially, they were fully confident that Kiev would be able to break the defenders of Donbass and capture it completely. However, after the Ilovaisky disgrace, ExxonMobil representatives openly started talking about the fact that in the conditions of the civil war, "the project is economically inexpedient." In 2015, after Debaltsev and the signing of Minsk-2, they announced its complete termination.

At the same time, Nadra Yuzovskaya LLC, which initially played only a minor role under the British and Dutch "lions", did not go anywhere - in the created consortium it owned a meager percentage of shares, and it was supposed to serve exclusively to pump money into the pockets of Ukrainian officials. But, come on, you turned out to be the "only heiress" to whom all the rights to develop the Yuzovskaya platform were transferred. True, they remembered this after the government of Ukraine stopped desperate attempts to shake off the ill-fated deposit at least to some of the foreigners. At first, in 2016, a certain company Yuzgaz, with Dutch, seemingly roots, acted in this capacity. After two years, its representatives attracted the Slovak Nafta as, which is part of the EPH Group holding, as investors. True, even these enthusiasts had enough fuse until 2019, when they also prudently “reeled off their fishing rods” from the region, where hostilities could break out again at any moment. After that, in fact, NJSC “Naftogaz” got down to business, having bought out LLC “Nadra Yuzovskaya”, as they say, with all the giblets.

The path to owning the wealth of the deposit turned out to be open, and the holding said that it was determined to invest more than 3 billion hryvnias in its development. Where this amount will come from is still unclear, but in Ukraine the main thing is to promise ... In any case, in January of this year, Naftogaz even reported that “blue fuel” allegedly began to flow into the system of gas pipelines of the “nezalezhnoy”, actually produced at the Svyatogorsk deposit. At one time, NAK spoke about the prospects for launching from 30 to 60 wells on it, which will be accompanied by at least two hundred hydraulic fracturing of the soil. Do I need to clarify that such prospects, to put it mildly, do not arouse the slightest enthusiasm among the residents of the region in which production is planned, as well as among environmentalists?

"Trident" is brought over Donbass

Today, Naftogaz is trying to assert that it is by no means a question of shale gas production. What are you, what are you - it's a completely different matter! It is planned to receive "blue fuel", which "lies in dense sandstone rocks." Most likely, in this case, there is either an outright and impudent lie, or an attempt to hide a very unsightly truth behind streamlined formulations. Well, just like when we call Ukrainian Nazis "right-wing radicals." It sounds like more decent, only the essence does not change. In any case, both at the Slavyanskoye field itself and on the absolutely overwhelming majority of the Yuzovskaya site, hydrocarbons can be extracted exclusively using Technology hydraulic fracturing. Or, if you like, fracking.

For those who are not entirely in the know or have forgotten what it is, I will briefly remind you that this method of mining in most normal countries is considered barbaric. Fracking is completely banned in Germany, France, Switzerland, the Czech Republic and even in Bulgaria and Romania. Yes, in the USA it is used on a very serious scale, however, only in those areas where there are not a large number of inhabitants and which, in fact, are already deserts. The reason is simple - hydraulic fracturing technology poses a danger both for people living near the places of its application, and for the environment, to which it causes simply colossal damage. Fracking drilling is fraught with earthquakes, sinkholes in the soil, destruction of buildings and roads. However, much worse is the harm caused to nature by chemicals pumped into the wells, which subsequently destroy the so-called soil sole, affecting the root system of plants and turning fertile land into barren and scorched.

It should be noted that the barbarians from Naftogaz are going to use hydraulic fracturing for gas production in Slavyanskoye exactly where no mining can be carried out in principle - along the Seversky Donets, which is the main, and, in fact, the only serious water artery of Donbass. Most likely, protected areas like Krasny Liman with its forests and the resort Svyatogorsk with its national natural park "Svyatye Gory" are at risk of falling into the zone of future ecological disaster. In this case, only sanatoriums and tourist centers will be under attack, but also the Svyatogorsk Assumption Monastery - one of the oldest shrines of Russian Orthodoxy. There is one more aspect - the overwhelming majority of those places where gas production is planned are located in the very immediate vicinity of the line of contact between the Armed Forces of Ukraine and the defenders of the Republics of Donbass. In fact, on the border of the DPR, LPR and their territories, now controlled by Kiev.

It should be noted that in the Donetsk and Lugansk republics, a categorical ban on the extraction of minerals by hydraulic fracturing was established almost immediately after their proclamation of independence. Another reason for the aggravation of the military situation? Undoubtedly! Moreover, the representatives of "Naftogaz" with great pleasure will blame any man-made accident on drilling or gas pipelines on "shelling of separatists" or their "sabotage". And then they themselves will arrange something like that in order to give a reason for "retaliatory actions" of the Armed Forces of Ukraine. The problem is that this time Kiev is unlikely to abandon its plans - the "post-Maidan authorities" are pushing both the American owners and their own plan with the pretentious name "Trident" to implement them.

As a matter of fact, Trident is a whole "strategy for the development of gas production in Ukraine", the implementation of which, of course, will have to bring Kiev "energy independence" from the hated Russian hydrocarbons. Like any similar projects, "Trident" a mile away smacks of frank Manilovism and raises huge doubts about its own feasibility. In principle, it includes three main areas - "extraction of deep-seated resources", "development of shale deposits" and "development of the Black Sea shelf". Well, of course, no one will let Naftogaz into the Black Sea. A kind of "superdeep well" seems to be being drilled at the Shebelinskoye field. However, the main hopes for at least partial implementation of the "Trident" appear to be pinned on the development of the Yuzov platform. At the same time, according to economic experts, from the point of view of profitability, this project is more than doubtful. According to preliminary estimates, one thousand cubic meters of "blue fuel" obtained from it will cost about $ 200. The usual cost of Ukrainian gas is $ 50, maximum $ 80 per thousand cubic meters. Moreover, in order to "accelerate" the local production to the figure of 15 billion cubic meters of gas (which is about the same as the needs of Ukraine), billions of dollars in investments are needed. Obviously, not in hryvnias ... The "non-cash" itself does not have that kind of money, and as for foreign investors, the entire history of the Yuzov platform cited above shows an extremely low probability of their involvement in this project.

However, here, as they say, options are possible. According to some reliable data, the notorious Burisma Holdings, to which Hunter Biden is closely related, showed an increased interest in this field. Yes, yes, it’s his own son, and not a namesake ... As you know, Americans are very fond of combining the advancement of their geopolitical interests with the satisfaction of their own selfish appetites. If we assume that the United States is considering the development of the Yuzov platform as an excellent way to exacerbate the situation in Donbass, while filling its pockets, then the sinister Trident, alas, may have very real chances for life.
Ctrl Enter
Noticed oshЫbku Highlight text and press. Ctrl + Enter
We are
Peace enforcement operation. Russia inflicts a preemptive strike on Kiev
Three years left: Ukraine will be sold in parts
Reporterin Yandex News
Read Reporterin Google News
18 comments
Information
Dear reader, to leave comments on the publication, you must sign in.