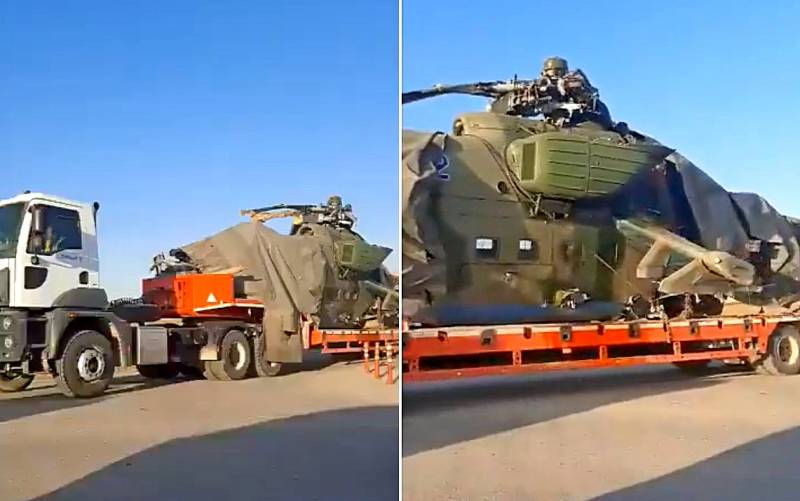 A video of the evacuation of a Mi-35 helicopter of the Russian Air Force, which crashed in the Al-Hasakah province in Syria, appeared on social networks. However, according to TASS, the helicopter made an emergency landing for technical reasons. Video footage demonstrates the transportation of the damaged rotorcraft, sheltered from prying eyes, by a truck.


The Russian defense department clarified that during the hard landing of the Mi-35, no one on board was injured, the pilots are now at the airfield.

On February 28, 2021, during a scheduled flight on air patrolling of the territory of Haseke Province (SAR), a Mi-35 helicopter made an emergency landing for technical reasons
- noted in the Ministry of Defense.


During the combat operation, the Mi-35, together with the Mi-8AMTSh, patrolled a convoy of military vehicles moving along the M4 highway in Al-Hasak. Mi-8AMTSh moved in front of the column at a distance of 5-10 km with a fire support group in order to conduct aerial reconnaissance. Mi-35 closed the column equipmentensuring her safety from the rear.

There are oil fields in Al-Hasak. Most of the territory of this region is controlled by Kurdish troops subordinate to the American forces. There are also US military personnel in the province.
Ctrl Enter
Noticed oshЫbku Highlight text and press. Ctrl + Enter
We are
A photo of the Mi-28 helicopter crashed in the Kuban is published
Russian passenger airliner boarded a corn field in Moscow suburbs
Reporterin Yandex News
Read Reporterin Google News
10 comments
Information
Dear reader, to leave comments on the publication, you must sign in.