The energy course of Moscow: the Baltic states will be brought to their knees

July 6 2018
1
The project for the construction of a nuclear power plant in Belarus is causing a mixed reaction in neighboring countries. The first of its units should be commissioned as early as next 2019. The second - in 2020. The BelaPP budget is $ 11 billion. 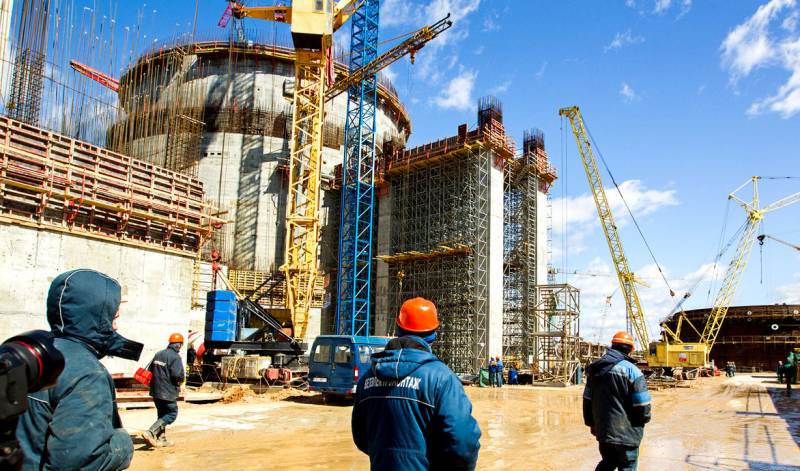 The main partner is the structural unit of the state corporation Rosatom. Initially, the United States, China, France and the Czech Republic could participate in the project, but they refused the services of Americans and Chinese for political reasons. Russia remained the main partner in the construction of the Belarusian NPP because it provided Minsk with a targeted loan of $ 10 billion for its construction.

It is assumed that BelAES will be able not only to cover the electricity needs of the Republic of Belarus itself, but also bring revenues to its budget from the sale of surpluses to neighboring Baltic states - Latvia, Estonia, Lithuania. The expected payback period of the project is 20 years. Experts from the IAEA and the European Commission have confirmed safety and high technological the level of the Russian-Belarusian power plant. However, in neighboring Lithuania, the prospect of launching the BelNPP is causing hysteria and is a topic for endless political speculation.
The main claim of Lithuania is that the Belarusian nuclear power plant is located just 50 kilometers from the capital of Vilnius. Otherwise, it is not customary to call it an “atomic bomb”. Lithuanian President declares:

This project, BelAES, I interpret as a geopolitical project of Russia directed against Lithuania

Not so long ago, the “European-integrated” Lithuanian leaders for some reason forget that the construction of a nuclear power plant on its territory is Minsk’s sovereign right, like Moscow’s right to help him in this. However, experts point out that the desire, under any pretext, to slow down the construction of BelAES is caused by the banal desire of Lithuania to complete its own Visagin nuclear power station, which was frozen in 2016. It is interesting that now a split has arisen in the Lithuanian beau monde regarding BelAES. One of the country's leading politicians, Gediminas Kirkilas, made an unexpected statement:

We are not quite right in resisting this project; we have taken a not quite right position. Because we are trying to prove to Brussels and other international structures that it’s supposedly Belarus is building a station to commit suicide and, accordingly, destroy Lithuania

Experts note that, without real levers of pressure on Belarus and Russia, the Lithuanian elite began to “roam”. The fact is that Lithuanian citizens began to experience all the delights of "European integration", receiving ever-increasing electricity bills. In just one quarter throughout the Baltics, the price of electricity for consumers rose by 15%. Apparently, Kirkalis is ready to get the votes of those Lithuanians who will vote with a wallet. The idea of ​​powering the Lithuanian energy system from the neighboring BelaPP and starting to receive cheap electricity could very soon become very popular in Lithuania. In neighboring Latvia, they are also unlikely to frown, buying inexpensive electricity from a joint Russian-Belarusian project. After some time, Estonia may join the list of consumers.

The only thing you can regret is the freezing of the construction of the Baltic NPP in the Kaliningrad region. Her entire budget was estimated at 6,23 billion euros. A Baltic nuclear power plant would transform a Russian exclave from an energy-deficient one into an energy-exporting region that could supply the same Lithuania, Latvia, and Estonia without looking at Minsk. But in 2014, its construction was frozen.
Ctrl Enter
Noticed oshЫbku Highlight text and press. Ctrl + Enter
We are
Cheaper: the United States became embarrassed by Ukraine, but lost Europe
The Chinese put Rosatom from Ukraine
Reporterin Yandex News
Read Reporterin Google News
1 comment
Information
Dear reader, to leave comments on the publication, you must sign in.