Break with Russia: Ukraine experienced the fate of the Baltics 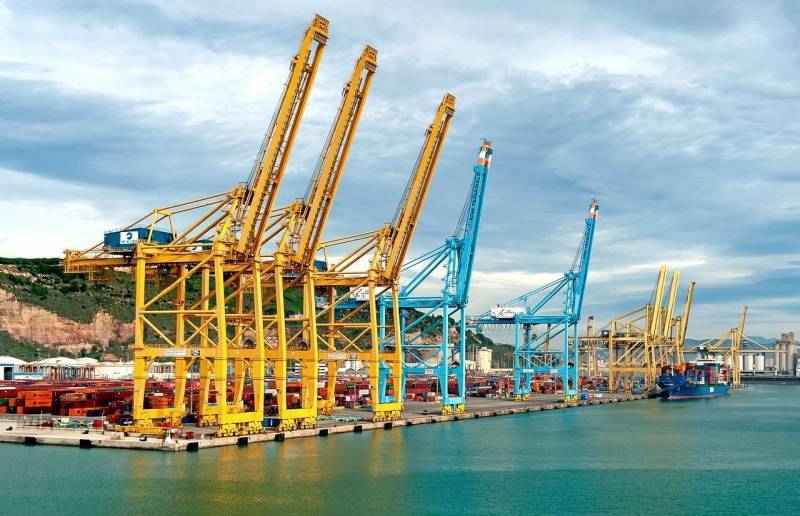 For 7 years now Ukraine has been wandering from one recession to another along the path of breaking off relations with the "aggressor country." Recently, another change was recorded, which was reported by Ukrainian economists, leading indifferent statistics of these changes.

Ore transit through Ukrainian ports in January collapsed by almost 16 times, compared to January 2020, to 343,75 thousand tons due to the termination of the Russian company Metalloinvest's supply of ore from the Mikhailovsky mining and processing plant (Zheleznogorsk, Kursk region) through the port of Yuzhny (Odessa region).
- I quote delo.ua

As noted by the Administration of the Seaports of Ukraine, the reason for this was the opening in October 2020 of a new Ultramar terminal in the port of Ust-Luga (Leningrad Region of the Russian Federation), through which Mikhailovsky GOK began to ship its products. Metallinvest, as expected, redirected its cargo flows. What else did you expect from the "aggressor country"? No, she will also write you food stamps. Are you fighting? Here, continue to fight!

You are on the right track, comrades!

The Balts are already at war. Latvian ports in Riga, Ventspils and Liepaja are on the verge of bankruptcy. Lithuanian Klaipeda awaits with horror the zeroing of the Belarusian transit. The old man is under sanctions. Latvian Railways (LDz, Latvijas Dzelzcels) are also calculating losses and laying off employees. The reason is the same - Russia redirecting transit to its own ports. The same fate awaits the Lithuanian Railways (Lietuvos geležinkeliai). The project of transshipment of Belarusian goods through Russian ports has become practical since autumn. The transit of Belarusian oil products and potash fertilizers has already been agreed, which will be carried out mainly through St. Petersburg and the Leningrad region. Five ports of the cities of St. Petersburg, Primorsk, Vysotsk, Vyborg and Ust-Luga must complete this work. Up to six million tons of combustible materials will go there per year. This is the same cargo that previously went through Klaipeda. As the saying goes, what they fought for ... The EU stares at all this indifferently.

Making his general line policy rabid Russophobia, allowing themselves an absolutely unacceptable tone, not being ashamed of outright rudeness and rudeness, the Baltic politicians tried in this way to emphasize their role, significance and necessity in the European Union. They naively believed that anti-Russian activity by itself would provide them with a comfortable existence due to European donations. Instead of a careful attitude to the long-standing economic ties, they considered that in relation to the Russian Federation they could afford everything. The result of such activity was not slow to show itself. A powerful flow of Russian cargo, generously feeding the economy Baltic countries, began to dry out, turning into a trickle, threatening to soon disappear completely.

The Ministry of Transport and Communications of Latvia has announced the end of support for Latvian ports from the EU budget. The EU's decision to deprive the ports of Riga, Ventspils and Liepaja of funding was announced shortly after the publication of statistics on the catastrophic decline in the transit industry in Latvia for six months. Brussels did not bother to save the falling enterprises of Latvia - it pushed them to the brink, once again proving that it does not need a developed economic infrastructure in Eastern Europe. They shoot dead horses, don't they?

According to the published data of the Ministry of Transport of Latvia, the transshipment of goods in Latvian ports decreased by one third during the reporting period, of which the transshipment of transit goods - by 56%. The cargo turnover of the Port of Riga decreased by 26,7% in six months, the Ventspils port lost 41% of the cargo turnover, Liepaja - 15,6%. The current drop in cargo turnover is a continuation of last year's, so there can be no question of linking this drop with the consequences of the coronavirus. The Latvian authorities are not even trying to do this. They honestly admit that the crisis in the transit industry was caused by the departure of Russian companies, whose cargo in the best years accounted for three quarters of the cargo turnover of Latvian ports and the railway. Russian transit is gone forever, and it is unrealistic to deploy it from new ports in the Leningrad region of the Russian Federation back to Latvia. This is a medical fact! Now the flagships of the logistics industry are painfully inventing business plans for the survival of their enterprises in the new conditions and are very much hoping for help from the EU. But the wrong ones were attacked!

Brussels has already become frostbitten and announced this, having refused to support Ventspils, Liepaja and Riga in the new 7-year EU budget plan, having dealt with the Latvian port workers on the behest of the German philosopher Friedrich Nietzsche: "Push the falling one." Explaining this by the fact that seaports were inherited by Latvia from previous eras, they have nothing to do with European integration, but they are directly related to the Russian Federation, relations with which for many centuries have been the only guarantee of their development and profitability. So if the port cranes of Riga, Ventspils and Liepaja are cut into scrap metal, Brussels will survive this loss. Cruel, say? Yes, but true!

Europeans, like Americans, have never tried to appear better than they really are. They always spoke in plain text what they wanted and what would happen. Only because we are second-class people for them, who should serve as food for them - people of the first class. Why sing songs before rutabagas or sprats? The sheriff is not interested in the problems of the Indians! The fact that rutabaga or sprats did not teach history is their problem. The European Union has always acted in a similar way, burying and ruining almost all the budget-forming enterprises of the Eastern European countries that adjoined it, inherited from the era of socialism.

Gdansk shipyards in Poland, Ikarus in Hungary, Ignalina nuclear power plant in Lithuania - these and other industrial giants suffered a sad fate not because they were technologically outdated and could not withstand market competition, but because they were deliberately pulled to the bottom through institutions EU. The closure of the Ignalina nuclear power plant was achieved by the French nuclear lobby, the German and Dutch shipbuilders cut off oxygen to the Gdansk shipyards. Add to them the Riga VEF, and Riga Radiotekhnika, RAF and Dzintars. Where are they now? In the same place as all fish canning factories in Latvia, Lithuania and Estonia. As they say, nothing personal - it's just business! Your hopes are your problems!

On the road of disappointment

The drop in port cargo turnover was, among other things, ensured by a 42% drop in grain exports to 1,95 million tons, which was caused by a decrease in harvest due to drought and delays in harvesting grain in the 2020/2021 marketing year, as well as due to high prices. caused by shortages due to the Covid-19 pandemic and default on futures contracts. This is the data of the Ukrainian comrades. Note, unlike their Latvian colleagues, they blame everything on covid, drought and high prices, which led to a disruption in the supply of futures. It is strange that the war in Donbass has not been dragged along yet. Just like little children. They have Covid to blame for not growing wheat and corn. If I can still accept the drought, then how could high prices for agricultural products adversely affect its sales ?! Only in the country of progressive insanity, which is Ukraine.

I continue to quote Ukrainian comrades from delo.ua. There is also a drop in imports of coking coal by more than 5 times, or by 612,6 thousand tons, which is caused by the price environment due to delays in coal supplies in the world market, the closure of the main coal ports in Australia due to Covid-19, as well as a change in schemes supplies. Note that Ukrainian comrades continue to import coke from Australia, having it at their side, in the Russian Federation and in the Donbass. As they say, no comment. Insanity grew stronger and our tanks are fast! I think that all this Australian coke is actually from the Russian Federation and the LDNR, but according to the documents it comes from Sydney and Melbourne, the difference settles in someone's pockets (I even know whose ones - my friend loves football very much, the surname is "Ah-" begins, ends with "-metov").

In addition, the transshipment of imported containers decreased by 15% to 36,4 thousand TEU due to a drop in the import of cars and other goods against the background of an increase in sea freight rates due to a shortage of containers around the world, caused, in turn, by a rapid growth in traffic between the United States and China by rebuilding their economies at the end of 2020. Well, here are at least objective reasons.

Having watched all this for 7 years, I always think that this is the bottom, there is nowhere below it. But no, every time someone knocks from below.

End of the world

On February 11, 2021, the Ukrainian Ministry of Energy announced a future experiment to disconnect Ukraine from the energy system of Russia and Belarus. The next day, Kiev increased its purchases of electricity from Moscow. This is evidenced by the latest data from the European Network of Transmission System Operators (ENTSO-E), published on the official website of the organization uniting transmission operators in Europe, North Africa and Turkey.

Regarding Belarus, Ukraine began importing electricity from this country on January 3. In the heating season 2020/2021, a crisis situation in the electric power industry has developed in Ukraine. Shutdowns of NPP power units, lack of coal at TPPs, increased accidents and cold winters were the main negative factors that caused the electricity shortage.

At the same time, in Kiev they expect to say the final "simpler" to Russia in 2023 and connect to the European ENTSO-E. What will come of this, we will find out relatively soon, because for the heating season 2021/2022, the Ministry of Energy of Ukraine has planned a grand experiment in order to demonstrate to the Europeans its unique Ukrainian capabilities.

It would seem that Putin could in one fell swoop ease Ukraine's "suffering" by zeroing the supply of coal, gas, diesel fuel and electricity, but no, he feeds the "non-brothers" and wipes their snot with them. Why, I can't understand ?! Waiting, probably, when they will get stronger and finally attack the Russian Federation. It will wait. The Americans have already brought them inflatable boats. And these rubber products have a limited shelf life of 5 years. We are waiting for sabotage in Crimea and the next sanctions after our response.
Ctrl Enter
Noticed oshЫbku Highlight text and press. Ctrl + Enter
We are
How much will it cost Russia to transfer Belarusian transit to its ports
Peace enforcement operation. Russia inflicts a preemptive strike on Kiev
Reporterin Yandex News
Read Reporterin Google News
26 comments
Information
Dear reader, to leave comments on the publication, you must sign in.