Josep Borrell's visit to Moscow - the surrender of Europe or the declaration of war? 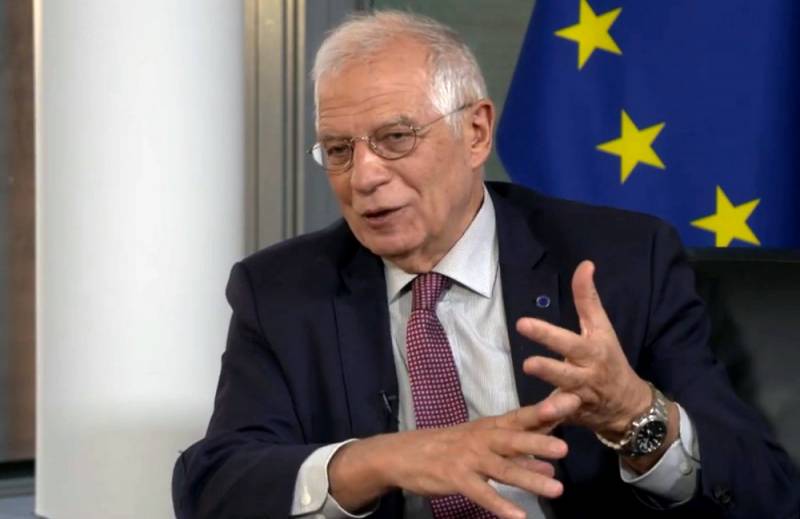 "Shame", "catastrophe", "humiliation" ... Believe it or not, but in this way, and amicably and in one voice, assesses the trip to our country of the High Representative of the European Union for Foreign Affairs and policy the security of Josep Borrell the absolute majority of the Western media, as well as a number of his fellow diplomats and politicians from the EU countries.


Why would they have come to such categorical and impartial conclusions for one of the leading European officials, and what could actually signify his obviously not asked Moscow business trip? Let's try to figure it out.

How Borrell became a "tool of Kremlin propaganda"

To tell the truth, I have not remembered such a unanimous and such harsh condemnation by the Western media, politicians, and the expert community of any of the “friends” (and not even the last category) for a long time. It's just some kind of darkness ... “This visit is a real disaster! Borrell confessed to the Russians that the EU has not yet taken a single step towards approving new sanctions against Russia over the Navalny case ... "- the European version of Politico seethes with indignation. Most of all, its authors were offended by the fact that "the former head of the Spanish Foreign Ministry stood with a grin and silently listened as Lavrov, in his closing speech, called the EU an" unreliable partner. " Obviously, in the opinion of journalists, Mr. Borel had to make terrible faces at that moment in order to express his protest against the statements of the head of our diplomacy.

"The words of the EU representative about his displeasure with the arrest of Navalny were" lost "in the shadow of Lavrov's assertive response, who dared to reiterate his doubts about the West's conclusions regarding the poisoning of the oppositionist with military nerve gas, voiced personally by German Chancellor Angela Merkel in Berlin!" - in this place, Politico's "righteous anger" is in full swing. Well, yes, our Sergey Viktorovich is so ... Assertive, you know. And he doesn't break his hat in front of the chancellors - especially when they deign to talk nonsense. The British publication Spectator is no less categorical in its assessment of the voyage of the chief euro diplomat. Speaking on its pages, Mark Galeotti, positioned as "an expert on Russia and Eastern Europe", calls this trip not just "a triumph for the Russians", but also "a master class of all the worst in EU diplomacy." In his opinion, "The Kremlin has received another reason to prove that it is impossible to intimidate it and that it will not change its policy because of the sanctions." Well, actually, they could have guessed earlier, and not shove everything onto poor Borrel ...

The main meaning of the accusations against the head of European diplomacy comes down, first of all, to the fact that he "did not even try to meet with Alexei Navalny, his wife, or at least with someone from the FBK representatives." He did not "conduct a detailed conversation with the forces that stand for democracy in the country." Interestingly, those who in all seriousness blame Borrell for this really consider Russia a place where any visiting EU official can just go and “chat about life” with an inmate convicted of fraud and being in the place of serving his sentence ( which, as you know, is a regime object)? Or hand out cookies to his accomplices, wiping away their tears and everything else with a blue handkerchief with gold stars? Some have already tried to learn something similar - now they are packing their bags. And rightly so! The sooner it comes that our country has got rid of the semi-colonial status and does not intend to return to that, the better.

By the way, for the fact that he visited Russia exactly when the naughty would-be diplomats from Poland, Germany and Sweden are expelled from it, Borrel in the West is also burned in the most merciless manner. How could he ?! Ours are beaten! It’s very interesting, what would have happened if the employees of the Russian embassies were “lit up” in the forefront of, say, “yellow vests” or those who stormed the Capitol? What is typical (and, in general, quite predictable), with the most angry phillipics against their seemingly senior comrade, representatives of the foreign ministries of those countries who, in truth, would be better off keeping quiet altogether, speak out. For example, the ex-Minister of Foreign Affairs of Latvia, and now a member of the European Parliament Sandra Kalniete said that "without ever mentioning Crimea and holding press conferences with Lavrov while Navalny is languishing in prison," Josep Borrell "gave a slap in the face to everyone who is fighting for democracy ”and, moreover,“ has turned into an instrument of Kremlin propaganda ”.

Is the European Union going to kiss Russia or bite it more painfully?

No less categorical is Eva-Maria Liimets, the Estonian Foreign Minister, whose indignation has no limits at all: how dare Borrell “congratulate Russia on the Sputnik V vaccine? How did he turn his tongue "to criticize the United States" in Lavrov's company? Why did he not “come out publicly with a clear condemnation of the Kremlin’s aggression in Donbass, the annexation of Crimea and the torpedoing of the“ Minsk agreements ”? And, most importantly, why the European diplomat "did not declare in Moscow that Estonia in the EU demands the introduction of new anti-Russian sanctions" ?! Obviously, according to Ms. Liimets, with these terrible words, Sergei Lavrov would have fainted ... This is not cured, gentlemen. Alas, this is no longer cured. I could give a dozen more similar characteristics and assessments, but in conclusion I will limit myself to just one. The British Telegraph not only called Borrell's trip "humiliating", but also allowed itself to quote the local political veteran, former leader of the Conservative Party and one of the "fathers" of Brexit, Ian Duncan Smith, who considers it "an example of how the EU kisses Russia. from the back ”. This is subtle English humor, obviously ...

Be that as it may, but Mr. Borel nevertheless tried to show what in Smith's homeland they call "wit on the stairs", but in our country they call swinging fists after a fight. In any case, the ritual laying of a bouquet at the place of Boris Nemtsov's death, undertaken by him, looked exactly like this. However, later, finding himself in the familiar and homely Brussels atmosphere, the EU High Representative for Foreign Affairs and Security Policy began ardently to argue that he, one might say, struggled to communicate with the Russians in the spirit of "principled diplomacy." And he went to Moscow solely to "check the mood of the Russian authorities" and "collect information before the March EU summit, which will discuss policy towards Russia." Straight Stirlitz ...

But in general, in Moscow, Borrell, as follows from his branchy ... sorry - a detailed commentary posted on the official website of the European Union, behaved like a real fellow! And he “demanded to release Navalny immediately,” and called for an investigation of his “poisoning” in the most categorical way, but of course! Because of this, his "conversation with Mr. Lavrov at times reached a high level of tension." Well, maybe. We, however, did not notice anything of the kind, and in the West, which is typical, no one saw or heard this either. However, Borrell claims that he made all possible demarches during the visit - and demanded that Sergei Lavrov fully implement the Minsk agreements, and did not forget to repeat the meaningless mantra about Crimea, and interceded for the colleagues expelled from the country, trying to prove that they “neither in which they did not go beyond the diplomatic status ”. And he even “put it on display” to the Russian Foreign Minister for “the deterioration of the human rights situation in the country and the deliberate attempts of its authorities to drown out the critical voices and voices of non-governmental organizations and representatives of civil society”.

Oh, yes, I almost forgot - "to respect the democratic choice of the people of Belarus" and to stop supporting the "terrible dictator" Lukashenko, he also demanded from Moscow. How bold! However, as already mentioned, if something like this happened, then somewhere deep on the sidelines of the meeting, far from prying eyes and the numerous lenses of journalists who recorded completely different things at the final press conference of Borrel and Lavrov. However, let it all remain on the conscience of the head of European diplomacy himself.

Another thing is more important for us. Namely - Borrell's words: "relations between Russia and the European Union are currently at their lowest level in a very long time." And also the main conclusion he made from his voyage. It consists in the fact that without announcing the arrival of such a distinguished guest from Brussels on the arrival of such a distinguished guest from Brussels, pardoning Navalny with all the "bulk" without exception, arranging instead an "aggressive press conference", which took place against the background of the expulsion of Western diplomats who lost their shores, Moscow " gave up the opportunity to make the dialogue with the EU more constructive. " Now, if you please see, he is “forced to think about the consequences” ... The European official also came to one more conclusion: “Moscow, seeing an existential threat in democratic values, is moving further and further from Europe”.

As you know, on February 22, Borrell is to hold an enlarged meeting of the heads of the diplomatic departments of the EU countries under the chairmanship of the EU, at which, as he himself said, "a special discussion of relations with Russia will be held." And, "yes, sanctions may well be on the agenda this time," the High Representative wrote in his speech. At the same time, they can be introduced “not directly for the persecution of Navalny,” but within the framework of some “newly approved sanctions regime for violation of human rights”. Obviously, this is the place where we should all get scared. However, the final decisions one way or another will be taken during the March EU summit. Nevertheless, we see that the gentlemen from Brussels, most likely, are not going to kiss our country, but are trying on how to bite it more painfully.

Josep Borrell, out of breath, calls on Europe to "act together and decisively" - against our country, of course. And even "take some risks for a safer world." Well, well ... "United Europe" has tried to do something like this more than once - either in 1812 or in 1941. Good lord, you laid flowers on the wrong graves. And then, probably, they would be careful not to scatter with such words.
Ctrl Enter
Noticed oshЫbku Highlight text and press. Ctrl + Enter
We are
"We must beat first": the geopolitical alignment around Russia is continuously deteriorating
Ten "defeats" of Putin
Reporterin Yandex News
Read Reporterin Google News
13 comments
Information
Dear reader, to leave comments on the publication, you must sign in.