START III extension is not peace, but preparation for war 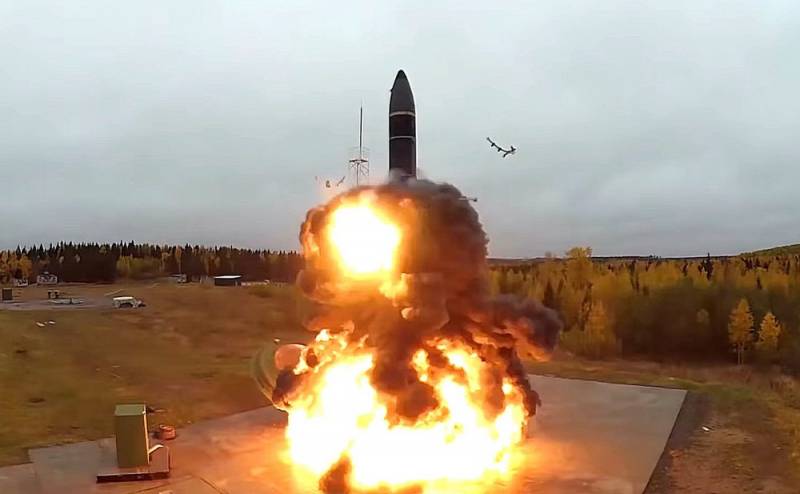 The extension until February 5, 2026 of the Treaty on the Reduction and Limitation of Strategic Offensive Arms (START-3), which was reported yesterday by all world media, is undoubtedly a positive event. At the same time, however, one should not at all overestimate its importance, seeing in such a decision a reason for complacency and relaxation.


It should be understood that Washington took this step solely due to the fact that at the moment it considers this agreement to be more beneficial for itself than for Russia. Moreover, while talking about peace and "reducing the threat," in fact, the American side is not just continuing, but intensifying and accelerating preparations for a nuclear war with our country.

"Struggle for Peace" with a Double Bottom?

Do not flatter yourself. The topic of heightened interest of the American side in this deal sounds quite frank even in the first official comments on the extension of START III, emanating from high-ranking US officials. Thus, the head of the State Department, Anthony Blinken, clearly indicates that she serves "the leading role of the United States in the field of arms control." The subordinates of Mr. Blinken in the message published on the agency's website regarding the continuation of the agreement are no less straightforward. According to them, "the resulting verification regime will allow American inspectors to monitor Russian nuclear forces and facilities in order to have a better understanding of Moscow's nuclear position."

Frankly speaking, Washington, frightened by the breakthrough development of domestic weapons and, above all, by the appearance of hypersonic missile systems in Russia, is doing everything to track this development as closely as possible. And if possible - and slow down. The best example of this, perhaps, is the recent publication in the American edition of The National Interest, whose authors enthusiastically speculate that the extension of the treaty will, perhaps, "turn into a museum exhibit" the newest Russian missile system Avangard, which is so frightening to the United States. They are firmly convinced that under the terms of the inspections, "the Kremlin will be obliged to notify Washington of the movement, deployment and testing" of these missiles every time. At the same time, the reference goes to the speech in the State Duma of the Deputy Minister of Foreign Affairs of Russia Sergei Ryabkov, who confirmed that Avangard was subject to START-3.

True, another statement by the same representative of the Russian Foreign Ministry is bypassed. Even before the official ratification of the extension of the treaty, Mr. Ryabkov clarified that "any actions of the American side that may be perceived by Russia as destructive and are an attempt to undermine its national security" will lead to the withdrawal of our country from START-3, which is "quite acceptable under the protocol." ... No, according to the deputy head of our diplomatic department, there are hopes that this will not come to this, and they expect to continue negotiations to "work out a new security formula covering all factors of strategic stability." It should be noted that at the same time, statements of a completely different kind are being made by the North Atlantic Alliance. In their official comment on the extension of START-3, NATO representatives say that they, of course, "fully support and welcome".

However, the same document is followed by a passage stating that the Alliance intends, despite this agreement, "to step up efforts in the field of close cooperation to repel Russia's aggressive actions that pose a threat to Euro-Atlantic security." But the Alliance is, in particular, Great Britain and France, which have their own nuclear arsenals and are not bound by any agreements. Such demarches, combined with recent statements by NATO Secretary General Jens Stoltenberg about the need to "increase defense spending to confront Russia and the rise of China" and similar "programmatic" statements by the head of the Alliance, leave a very bad aftertaste. However, the rhetoric of high-ranking representatives of the US military circles is even more alarming.

"To catch up and overtake the Russians ..." To destroy?

Speech in this case about the revelations of the commander of the US Strategic Command, Admiral Charles Richard. When a person, who is one of the key figures in the national defense system of the United States, begins to explain to his compatriots that the idea of ​​the fundamental impossibility of nuclear war is the deepest delusion, and in fact it is a "very likely scenario", it becomes somehow uncomfortable. Tellingly, this maxim contains as an article by the admiral, recently published in a specialized journal of the US Naval Institute. Subsequently, it was also duplicated in his interview with The Washington Times. Agree, against the background of the renegotiation of the treaty on the containment of strategic offensive arms, such conversations sound somehow not entirely appropriate. At the same time, the Strategic Command assures that the admiral's opus was written "last summer", and its publication "was prevented by a pandemic."

The connection, in truth, is rather dubious - rather, the speech of one of the highest-ranking officials of the Pentagon looks exactly as a counterbalance to the actions of the White House signing START-3. Let's return, however, to the essence and meaning of Richard's statements. In his opinion, a "regional conflict" between the United States and NATO with these countries can easily develop into a nuclear war with Russia or China. At the same time, the admiral, in the usual manner for Americans, "shifts from a sore head to a healthy one" and declares that, of course, Moscow or Beijing will use atomic weapons - "if they feel that they are losing and this threatens their regime or state." ... Interesting wording, isn't it? As if it is incomprehensible that the war between our country and the West, if it, God forbid, begins, in any case will be waged by our enemies for complete destruction ...

Nevertheless, the head of the Strategic Command is trying to assure that the last step from military operations using conventional weapons to a nuclear Apocalypse will certainly be made by the Russians or the Chinese. At the same time, he makes a very intriguing conclusion: the US armed forces must, first of all, "abandon the wrong attitude towards the impossibility of using nuclear weapons today," and, most importantly, "act in accordance with the changed reality." Considering that the basis of the American military doctrine is the bet on "preemptive" and "preemptive" strikes, all this looks like a very dangerous guide to action for his subordinates, sounding from the lips of the chief strategist of the Pentagon. It must be said that the propaganda of renunciation of the inadmissibility of the use of atomic weapons as such is combined in Charles Richard's speeches with another, very clearly traced motive. The admiral never tires of repeating: Moscow and Beijing "have recently invested too much in their nuclear potential," which allowed them to "bypass the United States." He believes that by the end of the decade, the Americans will "face two of their atomic counterparts." As for "strategic containment", then, according to Richard, it "may well not be in a world with a changed environment of threats."

It is said very much too abstruse (especially for a man in uniform), but the meaning is clear - the United States will adhere to any agreements only as long as it deems it beneficial and necessary for itself. Generally speaking, the idea of ​​the "lagging" of the United States in the military field from the "most likely adversaries" in the person of Russia and China has recently become too popular in certain circles of this country. The idea of ​​the need for some radical and immediate action to change the situation so unacceptable for the world hegemon is broadcast by the media close to the authorities with unpleasant regularity. What for?

For example, The Washington Post, in its recent publication, states that "the US military nearly lost world leadership" (are you sure ?! - author), and in order to "successfully compete for global influence" they must immediately take measures to increase "their own readiness for battle". Further in the editorial, in fact, follows a set of all the standard cliches that have become pretty boring during the Trump presidency - more appropriations for the Pentagon, more "cutting edge developments" and "investment in research" instead of "maintaining outdated and overly expensive weapons systems." Calls again to "make America hypersonic" and equip the Air Force there with unmanned fighters with artificial intelligence. It all ends with a rather vague reasoning about a kind of "unique but limited window of opportunity" that the United States has received right now, and which should certainly be used. One gets the feeling that this is precisely the extension of START-3, under the cover of which the United States intends to improve its weapons, holding back the development of Russian ones to the maximum.

In the meantime, the Pentagon, despite any agreements and talks between the leaders of the two states to reduce tensions, continues to attack Russia. Yes, yes, exactly an offensive, making the maximum advance to the borders of our country and taking positions for nuclear strikes on its territory. So, on the eve it became known about the transfer of the US Air Force of its strategic bombers Rockwell B-1 Lancer to Norway at the Erland airbase. According to the statement of the commander of the US Air Force in Europe and Africa Jeffy Harrigian, this is being done "to support NATO allies" and as part of the Bomber Task Force missions. At the same time, no one, in fact, even thinks to hide that these "strategists" will be aimed specifically at Russia and the Russian Arctic - the airbase, which will become their place of deployment, is located 480 kilometers from the Arctic Circle.

The extension of START-3 is, of course, wonderful. However, the goals and objectives of this action on different sides of the ocean are obviously understood in completely different ways. Someone wants peace. And someone is preparing for war ...
Reporterin Yandex News
Reporterin Yandex Zen
29 comments
Information
Dear reader, to leave comments on the publication, you must sign in.