July 3 2018
8
The state border, unfortunately, or, fortunately, is not a constant. Political the world map is periodically redrawn as a result of wars and other historical processes. Disputed territories can repeatedly pass from hand to hand. 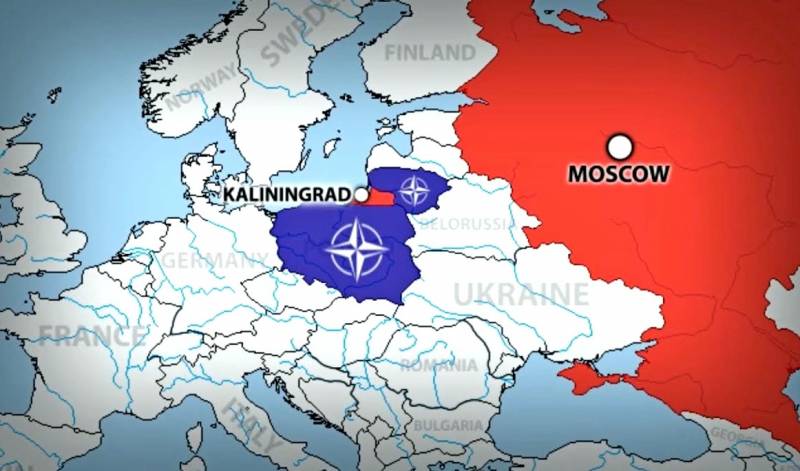 In March 2014, the Russian Federation included two new regions - Crimea and Sevastopol. However, this event put in jeopardy two other Russian regions, which are former owners in the form of Germany and Japan, the Kaliningrad region and the Kuril Islands. Andrei Kondratiev, Russian senator, made a cautionary statement:

As soon as Crimea became part of Russia in 2014, NATO began to consider the compensation program for Crimea in the Kaliningrad region

The Kaliningrad region became part of the Soviet Union following the Second World War, when East Prussia was divided between the USSR and Poland. Our country has received the most important stronghold in Europe at the crossroads of trade routes. Kaliningrad is extremely important for Russia in economic terms. But even more important is its importance as a military outpost. The Baltic Fleet, equipped with Caliber missiles, which have proven their effectiveness in Syria, is deployed at the westernmost Russian border. Despite the fact that the territorially Kaliningrad region does not have a common border with the Russian Federation, with the help of Belarus, in the event of hostilities, the Russian Armed Forces are able to break through to the 30-kilometer Suvalk corridor.

NATO is well aware of the military importance of the Kaliningrad region, so the elimination of this Russian bridgehead in Europe is a priority for the alliance. And work in this direction is actively ongoing. First of all, the population of the region is preparing for this through a network of non-profit organizations. The problem is that after the collapse of the USSR, a new young generation appeared that did not even appear in other regions of the Russian Federation as unnecessary. For many of them, Russia is a kind of abstraction, a huge country on a globe somewhere in the east. But there are real neighbors in the person of Poland, Lithuania and Germany, on which they are tied economy, business, study and leisure.

In the Kaliningrad region, pro-German sentiments are gradually spreading, it becomes fashionable to call the city the old German name Koenigsberg. It is difficult to predict how the population of the region will behave in the event of a prolonged military-economic blockade, which the NATO countries could take in the event of a local conflict. Who can vouch for how residents of the Kaliningrad region can vote in the event of a referendum on reunification with Germany by analogy with the Crimea? The prospect of becoming a citizen of Germany with all the resulting nishtyak as an alternative to living in an economic blockade can overshadow the minds of many.

And the North Atlantic Alliance is gradually preparing for different variants of events. Serious military exercises are constantly held. Senator Kondratiev speaks directly about this:

NATO is consistently and systematically building up groupings in those areas that seem strategic to them. So, the Baltic direction historically depended on three aspects: land - land - air. In this direction they are very active.

Already, the combined allied fleet exceeds the strength of the Russian Baltic Fleet. American bombers are practicing naval mining from the air to block the Russian naval forces in the Kaliningrad region. In Poland, the US military presence is growing. On the NATO exercise maps, Kaliningrad is directly indicated in red as a target. NATO is working on blocking the Suvalki corridor, through which the Russian military can come to the aid of compatriots.

They are really preparing for war - this cannot be called defensive goals.
- believes a member of the Federation Council.

This is not to say that Russia does not respond to the preparations of the alliance. In this special region, Iskander missile systems are located, which are capable of hitting targets in Central and Eastern Europe. The air defense of the region is the most modern and strong in Russia. In 2017, joint exercises with the Belarusian military “West” were held. In general, the situation is gradually heating up.
Ctrl Enter
Noticed oshЫbku Highlight text and press. Ctrl + Enter
We are
Kuril Islands farther from Japan: Tokyo protests
NATO's terrible dream came true: "Caliber" and "Iskander" stood in Kaliningrad
Reporterin Yandex News
Read Reporterin Google News
Ad
We are open to cooperation with authors in the news and analytical departments. A prerequisite is the ability to quickly analyze the text and check the facts, to write concisely and interestingly on political and economic topics. We offer flexible working hours and regular payments. Please send your responses with examples of work to [email protected]
8 comments
Information
Dear reader, to leave comments on the publication, you must sign in.