Failed "Maidan" of Navalny. Why did Russia's enemies decide to go for broke 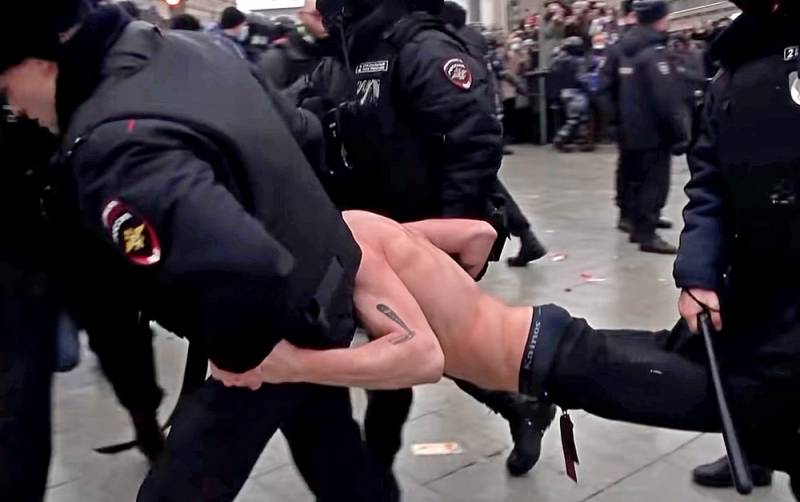 The events of January 23, as expected, did not become for our country any large-scale shock or a starting point for the "revolution" planned by their organizers. Nothing "fateful" or simply significant happened. Yes, the number of participants in unauthorized mass actions was greater than in all previous years - as, accordingly, the number of those detained for participating in them.


However, it is already quite obvious that the global goals, for the sake of which the coordinators of the “protests” and their masters, have started all this mess, have not been achieved. Nevertheless, there are a number of unanswered questions that need to be pondered right now.

"Revolution" in a hurry

As a matter of fact, nothing good from the planned 23 performances could have come out from the very beginning. Accelerated preparation, bad organization, reliance on seemingly proven methods and tools, which turned into a fiasco ... As a result - a result that is completely unacceptable for the "opposition", which means for Navalny and his supporters rather a defeat than a victory. It is clear that in reality there is no “nationwide support” for their extremely dubious movement, about which these figures are chattering incessantly. Nevertheless, it was urgently necessary for the “bulk” to create a more or less plausible appearance of such. It turned out somehow not very convincing ... At the same time, the main idea fell through: to bring children and teenagers into the streets en masse in order to substitute them under police batons, rubber bullets and stun grenades.

The calculation of the phenomenal number of provocative "stuffing" on the TikTok network and other popular youth (and not so) resources, such as Instagram, VKontakte and even Tinder, did not work. Huge efforts and obviously a very solid financial resource directed to the "shkolota" so beloved by Navalny were wasted - yes, provocative videos gained millions of views, but "live" so many people wishing to participate in obviously illegal actions were not close. According to preliminary estimates, no more than 5% of them were minors. On the other hand, the police showed all possible maximum restraint and tact - the “black prophecies” of domestic liberals, who had previously stated that “on January 23, someone’s children and grandchildren will be beaten with truncheons and their heads broken”, did not come true. Yes, there were detentions, including those quite harsh - where the "peaceful demonstrators" clearly crossed all the boundaries of what was permitted. However, no "bloody boys", which, in theory, should have been presented to the "world community", obviously trying very hard to work out the editorial task of the correspondents of Western media, could not be caught in the lenses. Kiev "onizhedeti" did not work ...

To be frank, the general feeling of most of the January 23 shares can be summed up in one word: "confusion". Not a single program of action, not a single leader, or, most importantly, any single idea and program. Some "married Lesha" - "because he is good" ... Others are unhappy with "Putin's palace", which they were shown on YouTube the day before. Still others are "for the environment" or "so that the Internet is not pinched." Fifth, seventh, two hundred and sixteenth and so on - just hang out. What immediately catches the eye is a completely obvious attempt to copy the unsystematic and, by and large, completely senseless “revolutionary ferment” through the streets in the Belarusian style. And this immediately raises questions: were the organizers of the "protests", who were given a training manual from a pack prepared for Minsk at the American Embassy, ​​were not able to figure out the simplest things? For example, think about the fact that staggering back and forth in Minsk and other hailstones and weights "Belomaidan" has the same ability to "influence" the local government, as magnetic storms on Jupiter? This format of the "revolution" clearly proved its own futility and certainly represents more than a dubious role model. In addition, it would be naive to assume that Russian law enforcement officers did not study it in the most thorough way and did not develop methods of counteraction.

Judging by how quickly and efficiently the loitering crowds of demonstrators in Moscow were dispersed, they still worked out. At the same time, our police officers did not even have to resort to particularly harsh methods of force, as their Belarusian colleagues had to do in the first days of the confrontation. Moreover, even the "couplings" of guys of "sporty appearance" noticed by many observers could not provoke the riot police to violence, clearly aimed at performing this very task. In fact, from the "revolution", which they tried to whip up in a hurry, they got some kind of fast food - something completely indigestible, even with a more or less presentable appearance.

There is one more thing worth paying close attention to. On the extremely open participation in everything that happens our "sworn friends" from overseas, and acting in the most official way. This is, first of all, about the "map of protest routes" published by the US embassy under the guise of a "warning" for American citizens, which has puzzled even Navalny's headquarters. The most remarkable thing about it, of course, is the indication that the "protesters" will certainly undertake a "march on the Kremlin." This is not even a provocation, but a demarche of a completely different, much higher level. It should, of course, be considered in the same context with the subsequent statements of both the American diplomatic mission in our country and the US State Department. "Resolutely condemnation of the disproportionate use of force against peaceful demonstrators" and peremptory demands to release both the participants in the illegal "protests" and Navalny, who provoked them, and "immediately and without any conditions", are nothing more than an unequivocal declaration of "taking under wing "of the whole warm company that is now trying to plunge Russia into the" Maidan "chaos. Representatives of the Russian Foreign Ministry quite rightly promised too "creative" figures from the US Embassy a call "on the carpet."

True, in the current situation, the conversation with them, perhaps, should have taken place not on Smolenskaya Square, but at the ladder of an aircraft leaving for the United States. At the same time, it would be nice to find a place on board for the employees of Radio Liberty, who stubbornly refuses to comply with the legal requirements for foreign agents. And even for some of the representatives of the same category ... In general, everything that is happening quite unequivocally indicates that the West and, above all, the United States openly indicate their interest in the complete destabilization of our country, a change in its power, and, therefore, domestic and foreign policy.

As a matter of fact, they are not just declaring war on us, but the first "offensive actions" are already being carried out against Russia. At the same time, the "cannon fodder of democracy" is being driven forward without any plan, preparation and serious support, literally to slaughter and without the slightest chance of success. What for? Why is there such a rush? Some political experts are inclined to believe that the whole point is in the summit of the foreign ministers of all 27 countries of the European Union, which is to be held in Brussels today. “Navalny's topic” was supposed to be discussed there even before the Sunday protests, but according to the head of European diplomacy Josep Borel, there were no “proposals for new Russian sanctions” before them. Now they are there - at least the French Foreign Minister Jean-Yves Le Drian and the Polish President Andrzej Duda have already made such an initiative. Moreover, the latter immediately stated that the main thing is to "limit the possibilities of Gazprom in the EU." Well, who is talking about what, and the Pole is talking about gas ... According to the available information, representatives of the Baltic States also ardently share such intentions. There is, however, a radically different point of view - the representative of the German Foreign Ministry Johann Zaatgoff spoke out categorically against “spoiling economic relations with Russia due to political complications. " Regarding Nord Stream 2, the diplomat even remarked that this was "a topic that has nothing to do with Navalny." So, most likely, the discussion of the "sanctions issue" will simply turn the ceremonial reception of high-level diplomats into a squabble of an all-European scale. However, it is rather unlikely that all the fuss with the return of the "beacon of democracy", which clearly had as its goal the current "protest actions", was started exclusively on this very specific, but not so large-scale occasion. Here, perhaps, is a much more ambitious plan.

Based on the above, two main versions suggest themselves. The first of them is suggested by the example of Ukraine. There, the removal of Yanukovych from power was planned for 2015, when the presidential elections were to be held. He would not have given it to the representatives of the "democratic forces" in an amicable way, there would have been a "Maidan" about "falsification of the voting results." However, Kiev's sharp pivot to Moscow in 2013 forced the West to sharply speed up events, since two years later the chances of a coup success would have been slim. Perhaps we just do not know something, and now our "friends" are trying to outstrip any decisions or actions of the Kremlin that will reduce the likelihood of a "color revolution" in Russia to an absolute minimum? On the other hand, another option seems more likely - the recent events in Washington made the "bulwark of world democracy" feel the precariousness of its own position. Hence the desire to dramatically accelerate and intensify the process of destabilization of at least one of its two global geopolitical competitors. This version is, of course, of great concern. Since if events develop within its framework, from the West, and, above all, from the Americans, the most inadequate and unpredictable actions should be expected. All conventions will be discarded - and the fight will go on without any rules.

This makes us think, in particular, the statement of the leader of the extremely extremist, openly Nazi Ukrainian group C14, banned in Russia, Yevgeniy Karas, who on January 23 urged the Foreign Intelligence Service of the “nezalezhnoy” to immediately “pack suitcases with dollars in order to set fire to a couple of support points of the Ministry of Internal Affairs "and in general" help the liberation "of our country. Whether in Ukraine there will be enough dollars for a whole suitcase (if you do not take into account the reserves of local oligarchs) is a big question. As well as whether the "Ukrainian patriots" will be able to set something on fire even with them on our territory. Nevertheless, the intentions are expressed quite clearly, and given that C14 is from beginning to end a project of the Ukrainian SBU and acts strictly according to its instructions, the FSB would have to prepare to receive "guests".

January 23 can be considered the "first round" lost by the "opposition" and its masters only if the domestic authorities show due firmness and consistency - first of all, with respect to those organizers and instigators of mass riots against whom criminal cases are now being instituted. And the Kremlin's response to US subversion will not be limited to "strong condemnation" from the Russian Foreign Ministry. The fight begins serious, there can be no place for hesitation and half measures in it.
Reporterin Yandex News
Reporterin Yandex Zen
35 comments
Information
Dear reader, to leave comments on the publication, you must sign in.