"Navalny's children": what to do with youth admiring the oppositionist 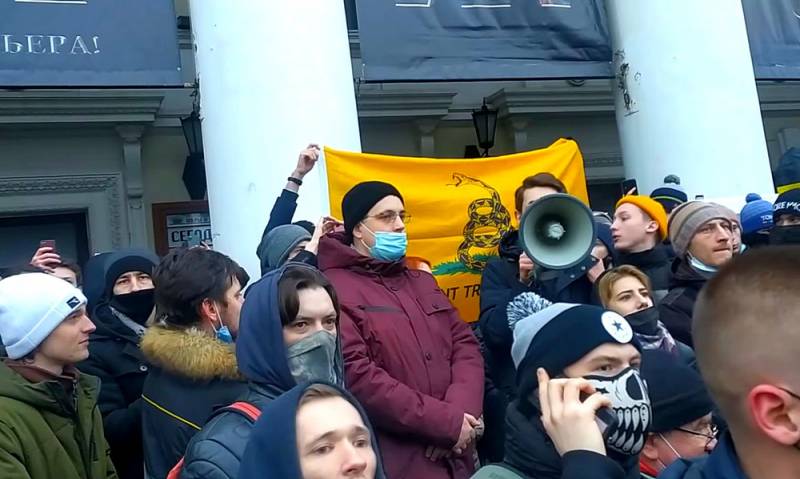 On January 23, announced by the opposition and the US Embassy, ​​protests were held in defense of the innocent victim of the “bloody hebny” imprisoned in “Matrosskaya Tishina”, the future Nobel Peace Prize-2021 laureate Leshenka Navalny, who was specially delivered from Germany to his homeland from Germany.

I will not now focus your attention on the hand of Washington in these events, which posted on the eve of its own embassy in Moscow a detailed map of the upcoming protests, with a list of cities, gathering places, time and routes of policies Kremlin local community. The Russian Foreign Ministry has already reacted to this in the person of its speaker Maria Zakharova:

Such comprehensive data clearly go beyond "caring" for their own citizens in Russia, but coincide with Washington's provocative doctrinal guidelines to stimulate protests in countries with governments they dislike. Any attempts of such "coverage" of unauthorized rallies will be considered as gross interference in the internal affairs of our country and will cause an appropriate reaction.
Everything is in order with the reaction of the Foreign Ministry, I would like to draw your attention to something else. Protests took place in many cities of the Russian Federation, the largest in Moscow, St. Petersburg and Yekaterinburg. According to the estimates of the correspondents of MBH-Media, at least 110 thousand people took part in the actions throughout the country (in Moscow - 15-20 thousand, in St. Petersburg - from 10 to 20 thousand, in Yekaterinburg - 5 thousand, in Rostov - 3 thousand). According to the White Counter, the rally in Moscow became the largest in terms of the number of protesters of all unauthorized rallies over the past 8 years. The project estimated the number of protesters at 15 thousand people. As reported by The Bell: the historical record for arrests has been broken - according to OVD-Info, a total of 21 people were detained throughout the country as of 55:23 Moscow time on 2364 January. There are 898 detainees in Moscow, 337 in St. Petersburg. The previous record was set in June 2017, when 1769 people were detained at Navalny's all-Russian anti-corruption action.

Something else is indicative here. The action was announced as a holiday of disobedience of the "shkolota", the gathering of which was announced in Tik-Tok. It was on this occasion that all the Kremlin's apologists shed crocodile tears, they say, did not overlook our youth, raised a generation of narrow-minded people who are manipulated by our enemies through their messengers, where their parents look and all that. But a poll conducted in the capital by the group "Monitoring of Actual Folklore" by Arkhipov showed that the "shkolota" at the action was just in the minority. Only 4% of the respondents said that they were under 18 years old, 25% were students (18-24 years old), the most massive was the age group from 25 to 35 years old - 37% of the representative sample. Another 15% of those who entered the action were people aged 36-46, 13% were 47-57 years old, and only 7% were pensioners. As you can see, the "shkolota" turned out to be smarter than her potential parents.

In principle, there is nothing surprising in this. And in Ukraine in 2013-14, the backbone of the protesters was also not "onizhedeti". The "Onizhedey" were stupidly used by the organizers of the coup d'etat to create a picture, and then those "who needed" pulled themselves up to do what "was needed." You can observe the results of their work for the last 7 years at your own zhovto-blakite fence with barbed wire. In neighboring Belarus, at the protest rallies that have been going on since summer, the “shkolota” were also a minority, the main backbone of the protesters is made up of sexually mature madmen who were born after the collapse of the Union during the reign of Father Lukashenka, who do not understand that they owe everything they have only to their “mustache tyrant ", overthrown - they will receive a second Ukraine. But this does not stop them, because fools are not trained to think. What the West is using.

What to do and who is to blame

This, however, does not relieve responsibility for what is happening from the bodies authorized for youth policy in our state, which so successfully failed it. But the Ministry of Education and the Ministry of Culture were responsible for it, not to mention the Ministry of Youth and Sports. And after all, there were quite specific leaders there who for three decades were engaged in something incomprehensible. Actually, the result of this work back in 2018 was summed up by the then Minister of Culture Medinsky, who complained that in 20 years they had raised a whole generation whose head was full of various nonsense. Therefore, I do not understand the lamentations about the fact that representatives of the generation that grew up under Putin are being gathered in Tik-Tok to bring down Putin. "When I was born, this did not happen, and here it is again the same!" There were so many conversations from each iron about the threats of color revolutions, but for some reason each new similar story causes such sincere and genuine surprise in these people.

The reasons for this, as it seems, are quite commonplace - in the absence of ideology, there is a serious problem with the ideals that our Kermanians are going to pass on to the youth. Due to the absence of these, instead of them, she receives various ideological ersatz-mythologemes that are not able to form in her that very national “dream of the future”, which is what our enemies use, slipping “their dream” as an alternative. And there is no need to blame our youth for instability or, even worse, for corruption, our youth, in our youth we are all oppositionists, with hostility we perceive any power as an element of violence against us. As Winston Churchill said:

He who was not a revolutionary in his youth does not have a heart, who in maturity did not become a conservative has no mind.
Of course, there is no reflection on the possible consequences - the scheme implies building in the young man's head an image of power as an obstacle on the way to reaching the "beautiful country of the future" (RF-RB-Ukraine, each has its own, cross out the unnecessary). After that, attempts by state propaganda to appeal to logical arguments are powerless. A holy place is never empty! If you are not engaged in ideological work with youth, this work will be done by specially trained people from the camp of your enemies. And they will not fail it, you can rest assured that they know perfectly well how to work and what result they want to get at the exit. And the most annoying thing is that they get it!

The delicate question is whether the authorities are to blame for this? Their war against the pernicious influence of the West on our growing youth was initially lost by them, from the very moment we headed for the West, saying goodbye to our great Soviet past, exchanging it for Bush and Coca-Cola legs. And the fact that since 2007 Putin has taken a sharp turn to the right on this issue, in fact, does not change anything, this machine is extremely inertial, in order to quickly deploy it, radical measures are needed, like those that are now being taken in Ukraine towards the Russian-speaking population (and then they have not succeeded yet). Or events comparable in scale to an act of military aggression against us (after the beginning of the Second World War, the number of internal enemies of the USSR dropped sharply, and some especially worthy representatives of the White emigration even took our side, which is understandable when the Fatherland is in danger). You can, as an option, use an imaginary act of aggression, as our "sworn friends-partners" in the West and in the adjacent enraged territory do, accusing us of all grave problems (under the motto Russia is an aggressor country, Ukraine still managed to rally the remnants of its population and suppress all those who disagree with this statement; under the motto of the Russian Federation - the Evil Empire in the West, more than one generation of Russophobes has grown up; the trend is working, we must pay tribute to our enemies). In the meantime, the struggle of those in power with the pernicious influence of the West in terms of efficiency does not exceed the efficiency of a steam locomotive, approaching the efficiency of Don Quixote in his war with windmills. There are many conversations - little sense! The world of cash has enslaved us.

Judging by the current events, the authorities only recently learned about the existence of Tik-Tok and the possibilities of using it for mobilization measures and various kinds of actionism. In fact, there is nothing new, of course, any popular platform is suitable for these tasks, where the state does not have the ability to regulate. As it was with the "cart" in Belarus or Fire Chat in Hong Kong. When / if the authorities in the Russian Federation take Tik-Tok into circulation, something else will appear. Work to anticipate the deployment of such networks and their destructive use by authorized structures in the Russian Federation is not carried out. Information generals still continue to prepare for past wars, not future ones, losing in this component to their foreign opponents.

Is it worth worrying about this? I don’t think so. As the past events have shown, the "shkolota" turned out to be much smarter than their potential parents and for the most part ignored the action in support of Navalny. And the action itself was rather aimed not at the internal audience, but at the external one. From there, we should expect new attacks on the Russian Federation in the form of sanctions and restrictions. And the “children of Navalny” will grow up and forget their prison authority, who will still have a prison gruel for a long time, they will have new guidelines in their lives, which does not relieve those in power of responsibility for the ideological component of the upbringing process of the younger generation. We didn't have an ideology, and we still don't. The main ideology is money! With such an ideology, we will lose the war to the West.
Ctrl Enter
Noticed oshЫbku Highlight text and press. Ctrl + Enter
We are
Navalny is another failed Charite victim
Ten "defeats" of Putin
Reporterin Yandex News
Read Reporterin Google News
57 comments
Information
Dear reader, to leave comments on the publication, you must sign in.