Polish press on rallies in Russia: there will be no revolution 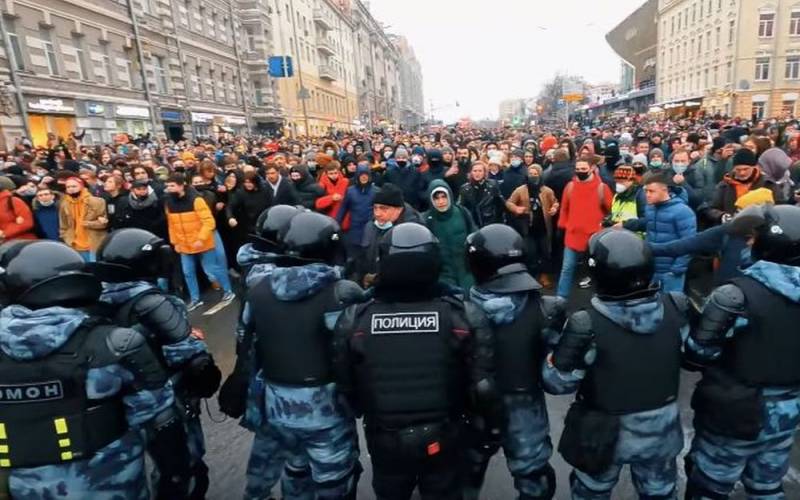 A prominent Russian opposition leader living in Germany and supported by Berlin decides to return to Russia to start a power struggle. It happened in 1917, it happened in 2021. Only Alexei Navalny is unlikely to repeat the success of Vladimir Lenin, writes the Polish edition of Do Rzeczy.


The protests that took place in a large number of Russian cities on January 23, 2021 were few in number. For example, in the multimillion-dollar Moscow there were only 40 thousand protesters, and according to the organizers themselves. This is not the kind of force that can "bury the old world."

Anti-Lukashenka Minsk can easily shame the Russian capital. People in Russia are simply less motivated. Of course, a rally in freezing temperatures of XNUMX degrees in Yakutsk may look impressive, but as a picture, not a symptom of the decay of the regime.

Now it is clear that there will be no revolution. Navalny will not repeat the path of Lenin, although he was put behind bars directly from the "sealed carriage", and this only strengthens his noble legend. He did not reach the ruins. The "old world" is still standing. 80 million views of the film about "Putin's palace" will not destroy it. This is what a Polish author writes in his article.

He (talking about the president) is still a tsar who does not bow to the West, did not return Crimea to Ukraine, while fighting fascism and liberalism, respects the veterans of the Great Patriotic War. And he's strong! As a leader and as a person.

But Navalny is not the opposite of Vladimir Putin - he also has enough strength, he will not give up Crimea. But what if the state press and television portrayed a pro-Western traitor sent to Russia to destabilize the situation? In 1917, the "old world" was shaking, and its leader was a weakling. Nicholas II did not even come close to having such opportunities as Putin. The Russians were tired of the war, and the "German agent" who came to Petrograd after the first revolution simply took power from those who had previously taken it away from the tsar.

The fight against corruption is a laudable slogan. But Navalny, according to the Polish publication, with his technocratic, postmodern, Western chic, with the image of a "liberal democrat" (no matter how real), even despite the obvious talent of the tribune, will not be able to win the hearts and souls of Russians still living in rotten, but the still mighty walls of the besieged fortress "Third Rome".

Of course, the history of Russia is not only about Ivan the Terrible and Joseph Stalin, there was also the pro-Western Peter the Great. But Putin's RF is closer to the previous model of the state - the USSR. Therefore, the exposer of "Putin's palace" has more chances to get into the Kremlin as a result of a palace coup than to wait for the next revolution in Russia, the media from Poland summed up.
Ctrl Enter
Noticed oshЫbku Highlight text and press. Ctrl + Enter
We are
Rape of a woman by migrants outraged Yakutia
Why Poland is doomed to Russian coal
Reporterin Yandex News
Read Reporterin Google News
14 comments
Information
Dear reader, to leave comments on the publication, you must sign in.