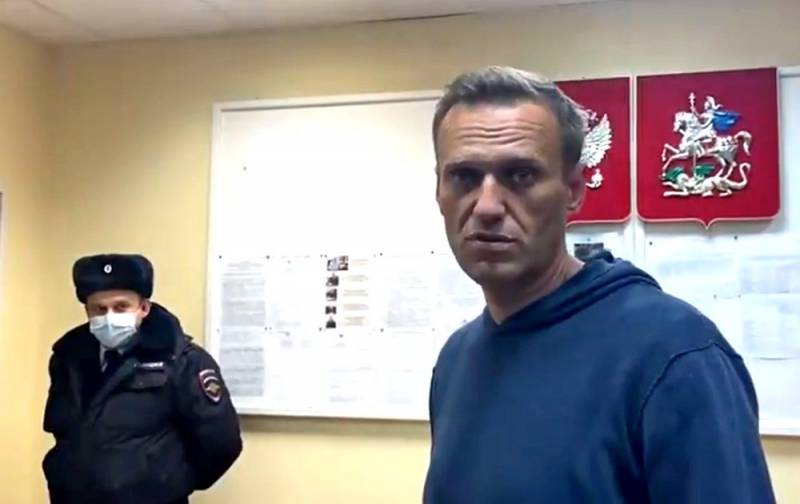 The events of January 17, which started at Sheremetyevo airport and ended for their protagonist in a pre-trial detention center, surprised many. First of all - the "great oppositionist" himself and his associates. Just like in the old children's song: "He never expected such an end ..."


Instead of, as has happened more than once, to pull one's head into the shoulders and turn another cheek, guided by the principle “we are insulted, but we are not offended,” the domestic authorities suddenly began to act clearly, sharply, and most importantly - without the slightest hesitation and some or looking back at the "world community".

Landing not according to plan

The American edition of The New York Times in its editorial, which gives a hundred points ahead of the editorial of the newspaper Pravda of the Gorbachev era, for its stupid and false pretentiousness, states: "Navalny knew for sure that he would be arrested." Let me categorically disagree with this attempt to once again create an image of a “fiery revolutionary” for a thieving "opposition" hamster. The whole point is precisely that this individual firmly believed that he would once again "carry over" the power, fearing a formidable shout from the West, not wanting to dirty his hands, deciding that it would be easier (emphasize the right thing), let him go the world, only threatening order with a finger. If it did, it was not at all in the sense that the “prodigal son” counted on when he set foot on his native land.

Such hard-hitting thoughts are born when in the frames of the now available video recording you observe the brazenly sleek face of the “fighter”, changing literally before our eyes as it begins to reach him: this time everything is serious and it will not be possible to “jump off”. The fact that boarding the liner, he did not doubt his own impunity, is evidenced by the words of the very same Navalny, said at that moment to the journalists of the German media: "It cannot be so that I was arrested!" Well, the trick of the wife of “the beacon of national democracy” Julia, on board the plane on camera, demanding that “the boy bring vodka” is generally outside. Not only are they and her husband in the eyes of the Russians - far from the heroes of "Brother-2", which this lady is trying to imitate, but in the famous film this phrase is uttered by a person with an extremely low social responsibility, if someone has forgotten. Yes, if in the West they planned to turn the same number with the Navalny couple as with the Tikhanovskys in Belarus, they obviously miscalculated. In any case, many in domestic social networks have already written: “the intellectual level is lower than that of the“ president Sveta ”... And this is a verdict, in my opinion.


We must pay tribute to the domestic law enforcement system - in this situation, it acted without the occasional "blunders", failures and "overlaps" - everything was organized and carried out at the proper level. While “meeting the future president” (this is what Navalny said on the YouTube channel), his fans were raging in Vnukovo, slowly moving from the waiting rooms to the very cold street, and some to cozy paddy wagons, the plane with “invaluable cargo” landed calmly at Sheremetyevo ... Undoubtedly, the spectacular excesses planned by this gang-leika, necessary for the Western journalists who had gathered together at the landing site to provide the necessary video sequence, were avoided. The "fiery revolutionary", without even trying to resist the authorities so hated by him, meekly left first for Khimki, where he was officially arrested, and then for "Matrosskaya Tishina". And no "riot". And there were some conversations ...

The problem lies in the fact that a hundred or two of the bawlers who had gathered in Vnukovo, accustomed to soft chairs with a sensible district police officer, would hardly have coped - not like with the riot police, who would have to fight in order to beat off the "satraps" and "executioners" their beloved leader. Incidentally, this demonstrates in the most convincing way both the Russians and the whole world the true “support” and “popularity” of this “leader”. The people need it in about the same way as the next pension reform. The western media, which are now tearing their hearts out with shouts about "protests against the arrest of Navalny" and "detentions of their participants," are somehow very crumpled and indistinct about the scale of both. Well, a certain number of individuals with "single pickets" came out. What to do - it's cold, but you have to work out the money. Well, they took a dozen or two "prominent representatives" of the domestic liberal crowd under their white hands. So for them it is, one might say, the fulfillment of official duties. The people, as such, are not there and were not ...

But in the West, downright hell is going on. Indeed, the feeling is created that Maria Zakharova, who called all the “angry protests” that sound from there, nothing other than “prepared ahead of time”, is a thousand times right. They sent the sick person to punishment (while probably promising that no one in Russia would dare to touch him), and now they are reaping exactly the fruits they hoped for. "A challenge to the entire Russian people", "unlawful violence against political opponents" - are floating overseas, merging in a touching unity, such sworn political opponents such as the future national security adviser Joe Biden Jake Sullivan, the still incumbent head of the US Department of State Mike Pompeo and Democratic Senator Bernie Sanders. You see, they urge, insist and strongly recommend that Moscow "immediately release" this "prisoner of conscience" and quickly "begin to investigate the outrageous attempt on him."

They do not lag behind in the Old World - there, the detention of Navalny "in the most decisive way" has already been condemned by the head of the European Commission Ursula von der Leyen, the President of the European Council Charles Michel and many smaller European bureaucrats like Josep Borel. At the same time, the German government and the Foreign Ministry of neighboring Austria allowed themselves an extremely harsh tone. There they are not just calling for the release of the prisoner - they are "demanding" him from Russia. Well, and, of course, the main parts in the friendly chorus of those who have clearly forgotten the ratio between themselves and Russia in "weight" on the international arena are performed by well-deserved Russophobes from the Baltic States, Ukraine and Poland. These, in their absolutely unparalleled arrogance, spit, as usual, everyone. The foreign ministers of Lithuania, Latvia and Estonia did not hesitate to come up with a clownish "joint statement" in which they "demanded from Moscow the immediate release of Navalny" and called on the European Union to impose new anti-Russian sanctions. Kiev declared about the "shameful practice of violating human rights" and demanded ... "to release all illegally detained political prisoners, first of all, citizens of Ukraine."

Warsaw threatens to "convene an extraordinary meeting of the UN Human Rights Council" and, of course, also "demands". By the way, in the UN itself (or rather, in the local office of the High Commissioner for Human Rights) they also started and began to mutter about "deep concern" and " immediate release. " Well, and let alone the groans coming from offices such as Amnesty International and Human Rights Watch, which would have long come without characters like Navalny, this is generally a matter of course. Oh, yes, I almost forgot, listing the reaction of world leaders ... "Sharp and menacing" the arrest of Navalny was condemned by Svetlana Tikhanovskaya. Still, a great thing is shop solidarity! What pleases and inspires most of all in this situation is the reaction we have observed so far to all this Sodom and Gomorrah in the world democratic camp on the part of domestic officials.

The tone here is set, in his best traditions, by the head of our Foreign Ministry. Sergei Lavrov, responding to the attacks that fell on his country from all sides, did not think to justify himself, but instead deigned to declare that the same Germany in this whole situation "is trying to behave like a boor" and "to talk like that" to Russia, no one will not be. In general, in the opinion of our chief diplomat, “as a carbon copy written” angry demarches of Western politicians in defense of Navalny are nothing more than “an attempt to divert attention from their own problems, and, in particular, the deepest crisis of the entire world liberal system.” In a word, if you translate from diplomatic to generally understandable - go, dear, where to go! No one in Moscow will even think of following your annoying "recommendations" and "advice". Requirements - even more so. Whether it is up to us to decide whether to release a Russian citizen, on whom more than a decent “bouquet” of charges of a purely criminal nature “hangs,” a little later, or even after a dozen years, after serving the due date. And your threats ... Well, you've probably already guessed?

It is clear that the "actions of an unprecedented scale", which are not enough, as you can see, the comrades-in-arms of the "prisoner of conscience" who have frozen their ears promise to deploy all over Russia on January 23, the authorities are not afraid. For what scale there will actually be is well known to everyone for certain. No wonder the "classics" of the domestic "opposition genre" like Kasparov and Khodorkovsky already prophesy that the poor thing "will be imprisoned forever" or will receive her honestly deserved "chervonchik" at least. Can these rogues not know that no revolution on this matter will happen, and attempts to "bend the Kremlin over" end up badly for their brother. For The New York Times, Navalny is an "international hero", "Putin's horror" and "a world-famous prisoner." At home, everyone knows the true value of this person.

It is noteworthy that in all the relevant organizations that caused the “landing” of Navalny, which caused a stir all over the world, and in the Kremlin, with which all these actions were probably agreed upon, just such a reaction, no doubt, was foreseen. There they went into confrontation, a sharp aggravation of relations with the West, quite consciously. Realizing perfectly well that professional Russophobes from all over the world will seize this occasion with great enthusiasm. By God, the impression is that Vladimir Vladimirovich remembered his own words about the fact that if a fight is inevitable, then you need to hit first.

Such thoughts are suggested, in particular, by the fact that, in fact, at the same time as Mr. Lavrov openly called the behavior of the German side "boorish" and unacceptable, the department headed by him appealed to Germany with an urgent appeal to finally think about paying decent compensation to the citizens of Russia. survivors of the blockade of Leningrad. Moreover, not dividing these people according to national or other characteristics, but "all without exception" victims of the aggression carried out against our country by the German Wehrmacht and its allies. Accident? I do not think so. A very sensible idea, and, in my opinion, in need of development - and not only in relation to Berlin. Here we have the head of the Czech Ministry of Foreign Affairs Tomasz Petřicek indignant at the arrest of Navalny and demanding new anti-Russian sanctions? So let's better ask from Prague for the monument to Marshal Konev! And at the same time - for other similar "art" ... We look forward to it.

Perhaps I am passing off wishful thinking, but what is happening looks as if Russia, tired of the endless attempts made by the West to "educate" it, decided to make it clear that it does not intend to tolerate any further.
Reporterin Yandex News
Reporterin Yandex Zen
46 comments
Information
Dear reader, to leave comments on the publication, you must sign in.