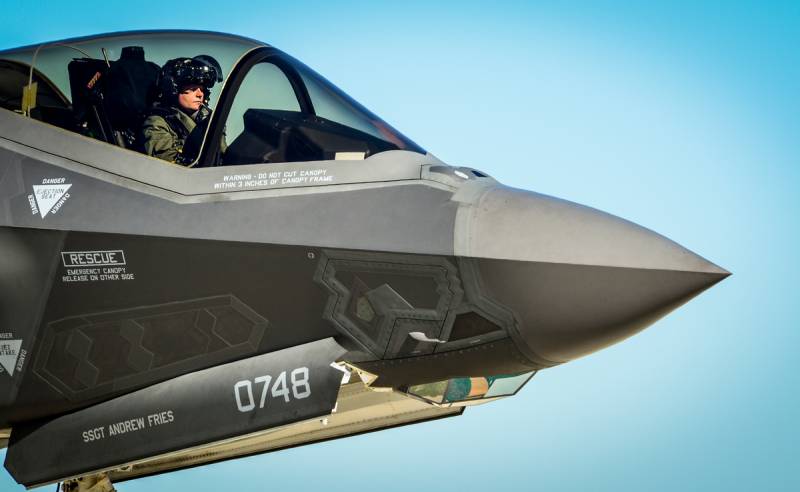 Those who from time to time try to question the scientific and military-industrial potential of Russia, skeptically assessing its capabilities to create modern models of combat aircraft, by all means try to set the United States as an example for us. The local "high-tech and super-advanced" developments in this area seem to be almost an absolute ideal, unattainable for us, "lapotniks" in principle.


However, is it really so? How many American "achievements" in creating winged reality machines, and how many - the most ordinary PR and unbridled fantasy? It is worth taking a closer look at this issue.

The plans include a squadron of robots armed with lasers

The American media traditionally pay great attention to detailing the "incredible prospects" that await the country's air force in the future. Articles of this kind are submitted as "confidential information" from the depths of private companies and even very serious government organizations that are involved in relevant developments or oversee such. There is hardly any doubt that these "leaks" are carefully planned and sanctioned from above. Thus, the "information background" is created, which is necessary for the ordinary American man in the street to be sure: funds from the huge US military budget, whose volumes are unparalleled throughout the world, are spent on ensuring that the country's army really has exclusively "all the best ".

Here are some more or less recent examples from the second half of last year. Such well-known publications as The Times and Popular Mechanics have undertaken to vividly depict previously unseen weapons systems, which supposedly may be in the US Air Force's arsenal in the near future. We are talking, for example, about the work carried out by the Office of Advanced Research Projects of the US Department of Defense (DARPA) in the field of combat use of millimeter electromagnetic waves (so-called microwaves). They, according to the available scientific data, are capable of effectively enough to carry out both non-lethal defeat of enemy manpower, and, much more importantly, to disable sensitive electronic elements of combat equipment enemy. In the bowels of the Pentagon, rumors are circulating about the supposedly successful test of a "high-precision cruise missile with a microwave warhead", which, being launched from the B-52 Stratofortress bomber, "successfully hit electronic targets" at a distance of more than a thousand kilometers. However, how much truth is in them is not known for certain.

However, at this stage, DARPA seems to be concerned not with missiles, but with "microwave guns", which, being installed on multipurpose fighters, can play the role of missile defense systems that effectively protect cruise vehicles from air-to-air and surface-to-air missiles ", As well as suppress enemy sensors and radars. This "weapon of the future", by the way, has a very serious competitor - the Self-Protect High Energy Laser Demonstrator (SHiELD) laser weapon system, which is seriously supposed to equip fourth-generation fighters in service with the US Air Force, such as the F-15E , F-15C, F-15EX Eagle and F-16 Fighting Falcon. Its purpose will be exactly the same as that of the "microwave guns" - an active anti-missile defense system for aircraft. The American aces do not plan to shoot down enemy vehicles with "death rays" yet ...

All this, however, pales before another program of the same DARPA, which The Economist told its readers about. In this case, the conversation is already about, as the newspaper writes, "technologies of future wars." Their main meaning lies in the gradual replacement of living pilots of combat vehicles (first of all, ultra-high-speed fighters) with artificial intelligence systems, capable not only of controlling an aircraft, but also effectively conducting air combat and hitting ground targets. Moreover, according to the publication, at a certain stage in the implementation of the mentioned ACE program, AI will have to take control of not one, but at least two fighters at once! According to the authors, this development is already at a very serious stage - for example, in August 2020, on the basis of the Johns Hopkins DARPA Laboratory of Applied Physics, a full-scale virtual "exercise" AlphaDogfight was held, in which as many as six potential developers of winged combat robots competed. According to the information provided by The Economist, some of them even managed to win "fights" on simulators of living pilots.

Concluding the conversation about the grandiose "air" plans of the Pentagon, one cannot fail to mention that, in principle, all the combat vehicles currently in service with it - both the fourth and fifth generations there are already recognized as "yesterday". You give the sixth generation, and the sooner the better! In any case, the Next Generation Air Dominance (NGAD) program of the military department, about which there are so far more rumors and speculation than real information, is aimed precisely at this achievement. Until recently, perhaps the greatest intrigue in this matter for the American expert community was who exactly would grab such a solid "jackpot" as a state tender for its implementation. Most likely, the sensation will not happen. And although no official statements about the developer of the "fighter of the future" have been made either by DARPA or by the Pentagon, but the recent slip of the financial director of Lockheed Martin Ken Possenriede, which he clearly made with intent, practically leaves no room for doubt.

This gentleman "mentioned" about "a very important and large-scale new aviation program", work on which is literally in full swing in the division of the Skunk Works. Everyone knows that this branch of Lockheed Martin is engaged in its most secret and futuristic projects. There is nothing to be surprised at - I intentionally did not mention the developers of all those new products, which were discussed in the first part of the material. This is not easy, but very simple - in just two words: Lockheed Martin. This mega-corporation practically monopolized the work with the Air Force of the American army, at least in the field of fighter aircraft and the creation of new weapons systems. Whatever it was, but the most expensive project in the history of the Pentagon, and indeed of the world aviation, the creation of the F-35 multipurpose fighter, is precisely its brainchild. By the way, it is with him that we will begin our conversation about the realities of the US military aviation.

Lockheed Martin Corp last year let down its own customers eagerly awaiting deliveries of the "most advanced" and insanely expensive cars. Instead of the 141 fighters planned for "shipment", 123 aircraft rolled off the company's conveyors. Thus, the deviation from the plan was 8%. And this result was achieved with great difficulty - back in May 2020, the corporation announced that, most likely, they could build no more than 117 F-35 fighters. The reason for this failure is, of course, the coronavirus pandemic, which, according to representatives of Lockheed Martin, confused all their plans "making it difficult for the factories," and, most importantly, "breaking the supply chain of necessary components and assemblies." The coronavirus, of course, has badly done something wrong to almost everyone in this world, but it is unlikely that it will be possible to “write off” all the problems with the F-35. The failure to release "most up-to-date" oddly coincided with a much more serious problem.

Let me remind you that an official decision on the mass production of this machine for the needs of the US Air Force has not been made by the Pentagon to this day. The "main and final" tests of the fighter, after which it should receive a "green light" from the US military, have been postponed over and over again, starting in 2017. Again and again, the next problems, flaws, design flaws are revealed - and their elimination begins. The next "final and decisive" combat tests of this machine, which have already absorbed an incredible amount of US taxpayers' funds, were scheduled for December 2020. However, according to an official statement by the press secretary of the deputy head of the Pentagon in charge of such issues, Ellen Lord, they are again canceled "indefinitely." As well as the decision to mass produce "the most modern". At the same time, speaking about the reasons for such a fiasco, the department, of course, mentioned a pandemic, but did not keep silent about the "technical problems" because of which the testing was deemed inappropriate.

What is Lockheed Martin left to do in this situation? Only as soon as possible to conclude a contract for the creation of a sixth generation fighter is, of course, both easier and more profitable than "bringing to mind" the fifth ... By the way, problems with the F-35 are far from the only "dark spot" in the current stage of fruitful cooperation of the corporation with the US Air Force. The tests of the experimental hypersonic air-based missile Hypersonic Air-Breathing Weapon Concept (HAWC) developed by Lockheed Martin and Raytheon Technologies, conducted in mid-December last year, also ended in complete failure. The pilots either tried unsuccessfully to launch the "super-duper rocket" loaded on board the B-52, or did not even dare to do so, subsequently reporting on some "fundamental errors" of a mechanical nature that prevented the test launch. Incidentally, in 2019, Lockheed Martin swore an oath that the "hypersound" they created would fly by the end of 2020 at the latest. It looks like HAWC, whose tests are "postponed indefinitely", will face the same fate in this regard as the F-35.

Meanwhile, according to a report published last year by the US Audit Office, whose representatives have inspected units and units of the US Air Force over the past several years, the degree of combat readiness of American combat aircraft is approaching critically low levels. According to Pentagon regulations, at least 80% of the vehicles must be ready to soar into the air at the first command - otherwise there can be no question of any effective defense of the US airspace. As for the vaunted F-35, which is the "latest development", they could boast of such a level of readiness for combat use only for a couple of years over the past decade. Most of these fighters need to be repaired almost constantly - because of the design flaws and vulnerabilities that were originally incorporated in them.

However, with the "good old" proven "horses" like the F-16 and F-15E Strike Eagle, the situation, if better, is not much better. A very characteristic problem of the American Air Force is that there are simply no spare parts for the normal maintenance of their vehicles, they are in short supply. This is far from a brilliant reality, which is worth delving into before trying to find fault with the domestic military aviation industry and extol someone else's to heaven.
Ctrl Enter
Noticed oshЫbku Highlight text and press. Ctrl + Enter
We are
New weapons on the way: What is known about the anti-satellite complex "Burevestnik"
“Fedor” in orbit: why Russia needs a robot-astronaut
Reporterin Yandex News
Read Reporterin Google News
22 comments
Information
Dear reader, to leave comments on the publication, you must sign in.