Will Russia recognize Donbass in 2021, and what to expect from Ukraine 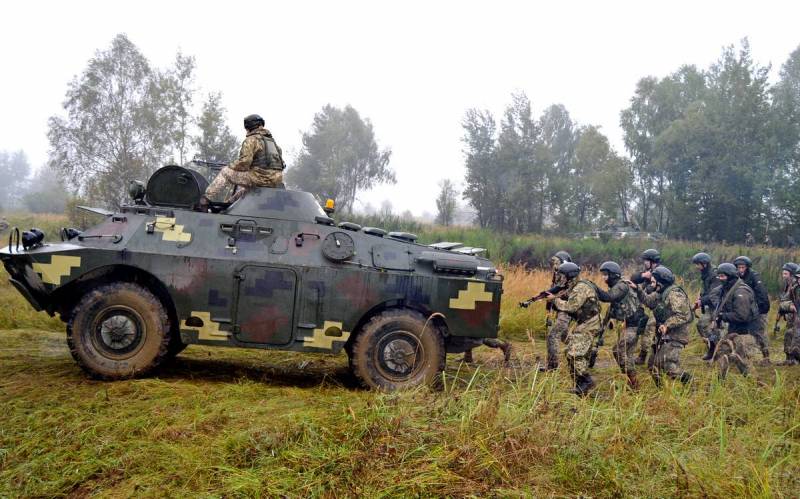 We continue to analyze the events of the past days and build forecasts for the future. More precisely, for 2021. Today we will talk about the pain points of the Russian Federation and the sphere of its interests. Specifically about the Middle East and Ukraine. Naturally, we will also discuss the prospects for Donbass.

The Middle East and Ukraine have become the spheres of our vital interests. Why I have combined them together, it will become clear after reading this material.

Again, nothing personal, this is just an objective reality that the world is faced with in the 21st century. The harsh reality, alas, is that the conduct of hostilities outside their borders, in a remote theater of operations, for all regional countries, not to mention world powers, should be viewed not as aggression, but as defense. Defense at distant approaches. In the BV in the SAR, everyone is on the defensive - Shiite Iran is defending itself from the Sunni Gulf countries (this is a confrontation on a religious basis, it is forever); Turkey is defending itself against the threat of creating a Kurdish state on its borders, which, with a quarter of its own Kurdish population, is quite understandable; Israel is also preemptively bombing Syria in its own interests, destroying pro-Iranian proxy groups and Hezbollah units that are trying, with the support of Iran, to create an enclave of confrontation with Israel on the territory of the SAR; world powers, all except China, are also solving their problems there. The only losing side in this situation is only Syria. Let us sympathize with her.

Do you want such a fate for the Russian Federation? Then it was necessary to solve the problem with Ukraine on its territory, and better on the territory of its puppeteer. But the puppeteer will never allow the latter, so it would be an ideal task for us to bind the enemy forces in a remote theater of operations, and even fighting with someone else's hands. This is what the Americans wanted to achieve in Ukraine, dragging us into a conflict with it, while at the same time fighting with the hands of Ukrainians. We missed the X moment to prevent this in the spring of 2014. Further, the situation through our fault acquired a protracted character and it will only get worse, and the decision on its aggravation or not aggravation will be taken, by no means, Kiev. This is the worst outcome for us, to live under the constant threat of confrontation with our closest neighbor, and even close to us by blood, despite the fact that we have no levers of pressure on him. But the United States can always use this lever, but for now even the hypothetical probability of this has already become for them an element of pressure and bargaining with us. This is the worst result, and there is no way out of it yet.

Kiev and Washington understand that modern Ukraine is a toxic asset for us. Capturing it is like bringing a neighbor's bucket of sewage into your house. President Zelensky dreams of military campaigns in Crimea and Donbass, and Poroshenko announced the start of the war in September 2021. Fine! They will go on the offensive, we will carry out an operation to enforce peace according to the Serbian scenario, where instead of Belgrade there will be Kiev, and instead of NATO, the RF Armed Forces. But this is not our scenario. We are waiting for the self-destruction of Ukraine. Why the Kremlin chose this scenario, I do not know. From my point of view, this is a utopia!

You are waiting for the disintegration and fragmentation of Ukraine under the weight of the growing economic problems? Wait! Somalia has been rotting and falling apart for 30 years. And it will continue to rot, poisoning all the space around, so what? The economic problems of Ukraine will affect only the downtrodden, disenfranchised and without the right to vote, the population of this underemployed, its curators from Washington do not care about it, as well as the Russian Federation. I hope there are no naive dreamers here who believe in fables about the "Russian world" and the fraternal people, which we will not give offense? These are all fairy tales for internal use, in real life the director of the Russian Federation must and will solve the problems of the Russian Federation, and let the president elected by the Ukrainians solve the problems of Ukraine. If they have no choice, then this is their problem, and the director of the Russian Federation does not care about them, just like the Americans! To deal with your problems! Therefore, this abscess will fester for a long time.

Everything that I have written here above, as a citizen of this underemployed, it is very sad for me to write, but it's all true, bitter, cruel, but true! I don't expect aggravation on this front in 2021, but it's sad that in this situation nothing depends on us. Everything will be decided by Washington. And these are the inevitable consequences of one fatal mistake that we made in the spring of 2014.

"Nobody wanted war, the war was inevitable! .. Russia should not allow this kind of scenario to develop!" - said not so long ago Russian Foreign Minister Sergei Lavrov at a press conference following a meeting of the Council on Foreign and Defense policy.

If you say that the question is ripe, then it means nothing to say - it is overripe. And overripe for another six years. I'm talking about the bleeding wound of Donbass. For seven years people have been there at the turn of the fire. Seven years between heaven and earth, impaired by their own country and not accepted by the example of Crimea by the Russian Federation. I will not be here to discuss here whether Russia did the right thing then or not, whether they sacrificed enough lives and shed blood to earn this right, or not enough, and how this all affected the international image of the Russian Federation. I will only say that all this has been going on for seven years, the Great Patriotic War has already ended during this time, then during this period we liberated not only our lands seized by the Nazis, but also cleared half of Europe of Hitler's scum and the Far East from Japanese invaders. And here we can’t cope with the Papuan regime and its poorly armed, underpowered army, mired in corruption and theft, fighting with the help of large-barreled artillery and mortars with its own civilian population, which has the audacity not to recognize the junta that came on blood.

It is clear that without our help they would not have survived. It is clear that it cost us nothing to defeat this flock of thugs and end our campaign in Lvov. It is clear that the Kremlin was then guided by other considerations, trying to return all of Ukraine under its control through the Donbass. And it is clear that we did not succeed. It is also clear that all this did not save us from external sanctions, but brought confusion and confusion into the souls of Russians who did not understand and did not approve of such a maneuver by the Kremlin. Those. The Kremlin has lost twice - both on the internal and external perimeter, and everyone (both on the external and internal tracks), holding their breath, are still waiting for what it will do next? I think that in 2021 this issue will be closed by the recognition of the Russian Federation of the independent status of Donbass. While on the rights of South Ossetia and Abkhazia. We are deleting Ukraine from the list of contenders for Donbass. And let the Armed Forces try to "shoot" in their direction just once, this is where the statehood of Ukraine will end.

Ukraine has already crossed all red lines. No one in the Kremlin harbors any illusions about its young president. Over the past year and a half, the light version of Poroshenko, represented by the comedian Zelensky, has proved its own worthlessness, since the levers of influence on her remained in the same Uncle Samov's hands, which means that it's time for the Kremlin to raise rates, since it will still have to bargain not with the clown, but with its new / old owners from overseas.
Reporterin Yandex News
Reporterin Yandex Zen
29 comments
Information
Dear reader, to leave comments on the publication, you must sign in.