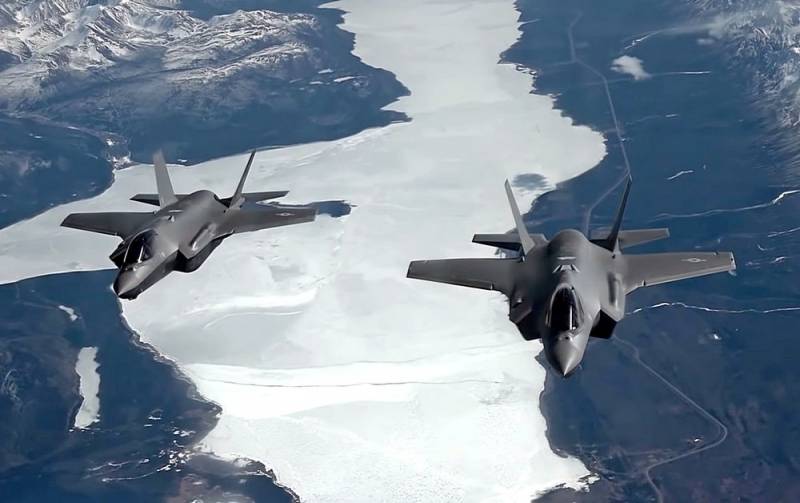 The United States is openly preparing to fight Russia over the Arctic. With the largest icebreaker fleet in the world, our country objectively dominates the Arctic region. The Pentagon has a deficit with icebreakers, therefore, it cannot introduce its own navy to ensure the so-called "freedom of navigation" and maintain its own navy in the Arctic Ocean on a permanent basis. Therefore, the Americans are betting on their superiority in the air force, building up their fighter group in Alaska.


So, by the end of next year, the US Air Force will deploy up to 54 fifth-generation F-35 fighters at Eielson Air Base, which is located in the northernmost state. They must reinforce the existing F-16 fighters, A-10 attack aircraft and KS-135 tanker aircraft. In addition, the Pentagon has four dozen fifth-generation F-22 Raptor fighters deployed at Elmendorf-Richardson Air Force Base. It is clear that all this striking power is located near the Bering Strait, which opens the way from the Northern Sea Route to Asia, not for the sake of a threat to the penguins.

But the Russian Defense Ministry is also on the alert. To stop the growing military capabilities of the United States in the Arctic region, some preparation was carried out in Russian Chukotka. Anadyr underwent a deep modernization of the existing airfield, which actually turned into a jump airfield for our most formidable Tu-160 strategic bombers. Two years ago "White Swans" defiantly flew across the country, landing in Chukotka. Considering that the Tu-160's nuclear arsenal makes it possible to wipe out not only the military infrastructure of the Pentagon in Alaska, but also to finish off the Hertland (the missile's flight range reaches 3500 kilometers), this event caused a resonance in the United States.

Unfortunately, "White Swans" have certain restrictions on use due to their huge size and weight. To land safely, the Tu-160 first had to use up the remaining fuel reserves. That is, he can fly to Anadyr only without a combat load. It is possible to equip bombers with missiles with nuclear warheads, which are located in the underground storage, only on the spot. Serious problems arise with efficiency and stealth. However, the Russian military seems to have found an elegant solution.
It is reported that a link of MiG-31 fighter-interceptors has been deployed to Chukotka on a permanent basis. This allows you to solve a whole range of tasks at once.

At first, the supersonic MiG-31 will be able to perform the function of escort fighters for the Tu-160, increasing their survivability in opposition to the American air defense system. The flight range of the MiG-31 without refueling is 3000 kilometers, with refueling - 5400.

SecondlyThanks to the Zaslon all-weather multi-beam radar, only four Russian fighters can cover an air front up to a thousand kilometers long. Accordingly, the level of protection of facilities of the RF Ministry of Defense in Anadyr is increasing.

Thirdly, fighters of the MiG-31BM version, which have been deployed to Chukotka, can be quickly replaced by the MiG-31K, and this is a completely different level of combat capabilities. They are the ones that have been transformed into an air carrier of the Kinzhal hypersonic ballistic missile, which is a variation of the Iskander-M missile. It is capable of maneuvering in the air, making interception difficult, and carrying a nuclear warhead. The range of the "Dagger" reaches 2000 kilometers, and if we add to it the maximum combat radius of the MiG-31, it becomes clear that the missiles will be able to cover American fighters at airbases in Alaska, command posts, and US Navy ships.

Thus, the MiG-31K can either strengthen the Tu-160 or independently pose a serious threat to the enemy.
Reporterin Yandex News
Reporterin Yandex Zen
14 comments
Information
Dear reader, to leave comments on the publication, you must sign in.