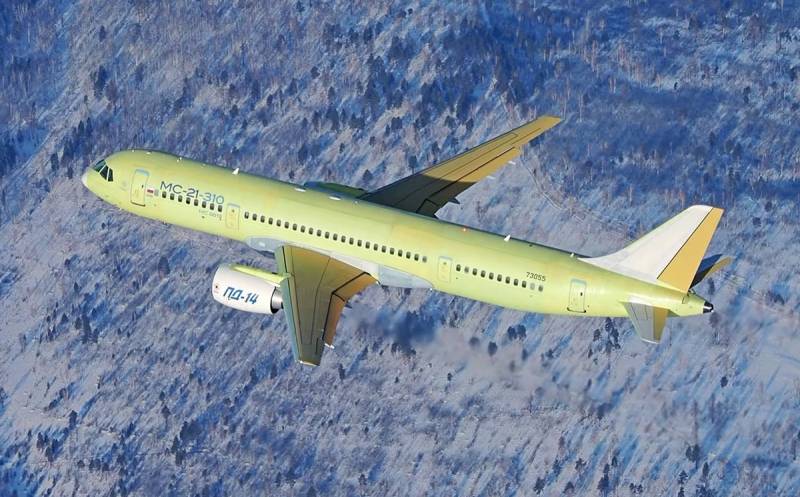 2020 was very difficult for Russia. Despite all the difficulties caused by Western sanctions, the coronavirus pandemic and low oil prices, this year can reasonably be considered the beginning of the revival of the national aircraft industry. In December, two significant events took place at once.


The first to please us was the Irkut corporation, which successfully tested its promising MC-21 liner with a Russian-developed PD-14 engine. This is the most important step in the revival of the civil aircraft industry in Russia, about which we will discuss told earlier. The problem of replacing a number of electronic components has yet to be resolved, but in a few years our country will close the niche of medium-haul liners on its own. At the same time, the MS-21 may well become a real competitor to American and European corporations in the market of a number of foreign countries.


It is very gratifying that Russia will now have its own new player in the segment of short-haul liners. The revived Il-114-300, which also made its first flight, will compete with the Superjet on local airlines. The Il-114 was developed during the Soviet era to replace the An-24. This is a twin-engine turboprop aircraft designed to carry 64 passengers over a distance of up to 1500 kilometers. Thus, it practically closes the market niche of 65-75 seats, which in an amicable way the Superjet-100 should have originally claimed. The liner will be able to take off and land on relatively short runways, it can be used on poorly equipped airfields in the Far North and the Far East.


After the collapse of the USSR, the enterprise remained in Tashkent, where the liner was produced in small batches until 2012. In 2019, it was decided to resume production of the IL-114 already in Russia, in the city of Lukhovitsy. At the same time, the modernized liner is equipped with Russian TV7-117ST-01 engines developed and manufactured by UEC JSC, part of Rostec, with an increased power up to 3100 hp. The domestic power plant turned out to be powerful, but economical and easy to operate. It is assumed that up to 100 such aircraft will be produced over the next decade. Oboronlogistics, Polar Airlines and KrasAvia have already shown interest in the IL-114.

The Russian military is also looking forward to its "old new" Il-112V from Ilyushin. This light aircraft, designed for operation at poorly equipped airfields, is urgently needed by our Military Transport Aviation. At one time, it was developed to replace the An-26, which have practically exhausted their resource. The resumption of production could have happened much earlier, but with the submission of the previous leadership of the Ministry of Defense of the Russian Federation, the Ukrainian An-140 crossed its path. The revived plane made its first flight in March last year, but it brought a number of unpleasant surprises.

It turned out that constructive miscalculations were made, due to which the weight distribution was formed, the nose part turned out to be lighter than the tail. Instead of lightening the tail, the developers went for weighting the nose. The result was a significant increase in the weight of the aircraft, which led to a decrease in the declared payload of 5 tons to 3,5 tons. The chief designer of IL, Nikolai Talikov, with obvious displeasure explained these shortcomings by the change of generations and by the fact that young specialists are still “weak”. It’s unpleasant, but it’s more important to draw the right conclusions.

The customer sent the Il-112V for revision, where experienced designers are now engaged in it. The weight of the aircraft has already been reduced by improving its weight distribution. Facilitation is achieved through the use of composite materials, optimization of navigational equipment, the ramp and doors of the cargo hatch must be replaced. The Samara plant "Aviaagregat" has manufactured new chassis for the transporter. It is reported that by November 2019, the weight of the Il-112V was reduced by a ton, and after completion of the work - by all 2 tons.

In general, the revival and deep modernization of Soviet developments in our realities is the right step.
Reporterin Yandex News
Reporterin Yandex Zen
10 comments
Information
Dear reader, to leave comments on the publication, you must sign in.