"Victory" parade in Baku: was there a victory? 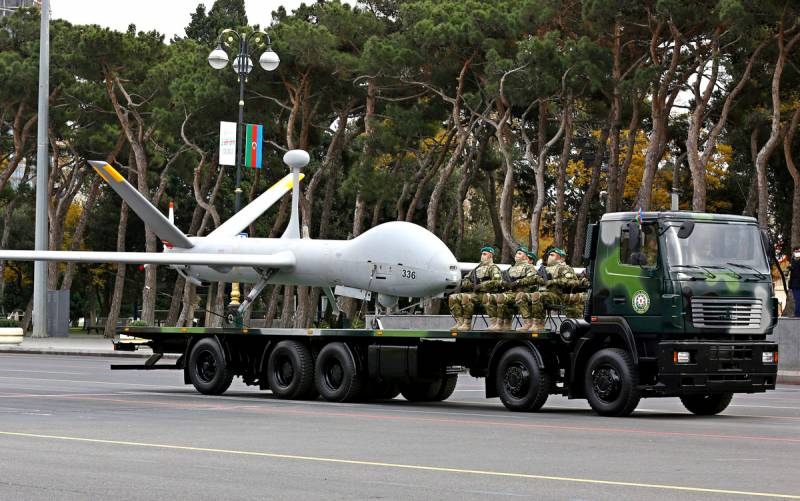 The pompous military parade, which took place on December 10 in the capital of Azerbaijan, was timed by the country's leaders to the unambiguously advantageous end of the Nagorno-Karabakh conflict. Or rather, its next round ... This event, no doubt, was planned as a demonstration of the strength and might of the Azerbaijani army, as well as its indestructible "military cooperation" with "fraternal" Turkey.


However, this, without a doubt, an impressive action resulted in something completely different. Both some of the circumstances of the Baku parade, and the words spoken at it, allow not only to doubt the coming of peace in the Caucasus, but also make one think: was there really a victory?

As you know, war is just a continuation policy by other means. And if this is so, then it should be recognized that the political processes that led to the armed conflict, in 9 cases out of 10, do not end at all at the moment when the fighting stops. Everything continues, and at the same time events may develop in the future in a completely different way, as the jubilant victors saw it. There are countless examples of this and I will not list them, limiting myself to a statement of fact. After the signing on November 10 in Moscow of an agreement on the cessation of hostilities in Nagorno-Karabakh in the Caucasus, a certain new reality was created. As a matter of fact, it was for this reason that Baku and Ankara started the whole business. Another question is, to what extent does the end result coincide with the original intentions of the strategists there? It can be assumed that not completely.

Apparently, when giving the order to attack, the leaders in both Baku and Ankara pursued much more ambitious and ambitious goals. Aliyev dreamed of the complete seizure of the entire Nagorno-Karabakh, and not just the "security belt" around it and some other territories that have now come under Azerbaijani control. The result of the “small victorious war” was probably not a truce, but the complete and unconditional surrender of Yerevan and the corresponding documents were to be signed on the ruins of Stepanakert, and certainly not in Moscow. “Free Artsakh” was to disappear without a trace, and not survive, albeit in a fairly truncated form, as it actually happened. What is absolutely certain - the appearance on these lands of a Russian military outpost and a fair number of peacekeeping contingent was absolutely not envisaged in any case.

This fact is especially unpleasant even not so much for Ilham Aliyev, who has never been a noted Russophobe, and, apparently, has not turned into him despite all the efforts of his “friends”, as for Recep Erdogan. This new-born "sultan" certainly did not dream of the appearance of the Russian flag over Nagorno-Karabakh. On the contrary, for him the “maximum program” in the planned war was precisely the weakening of its role in the Caucasus as a whole. It was conceived, in principle, not bad - using the example of Armenia to clearly demonstrate to everyone "the uselessness of military alliances with Moscow."

Apparently (and this version is confirmed by information from some Azerbaijani sources), the whole case was planned as a decisive blitzkrieg, which was to be done in a week. Maximum - 10 days. During this short period of time, the Azerbaijani regular units, with the support of the mercenaries provided by Turkey, had to swiftly attack not only the defense of the NKR and Armenian troops, but also capture key positions for the capture of Stepanakert. Ideally, capture it completely. Russia simply did not have time to intervene. However, the stubborn resistance of the defenders of Artsakh turned the "lightning war" into bloody battles, during which Azerbaijan, according to official data, lost 2783 people killed. Among his servicemen, there are more than one and a half thousand who received serious injuries.

Agree, this doesn’t make you want to “walk in the mountains”. Again, Moscow has shown sufficient firmness and persuasiveness in the negotiations, having managed to force Baku to stop a truly successful offensive literally at the gates of the NKR capital. Well, the introduction of our peacekeepers there was the most unpleasant surprise for Erdogan of all. It turned out that by paving the way to the heart of the Caucasus for himself, he cleared the way there for the Russians, whom he would like to see as guarantors of the ceasefire less than anyone else ...

Who lost more - Baku or Yerevan?

A strange question, you might say. After all, it is clear that the Armenian side was the loser - it is not for nothing that the current situation in the country is perceived as a military disaster and a national shame. That is so, but let's turn to the details, which, as you know, are the essence. Let's start with the fact that de jure Yerevan did not lose anything at all - after all, the territories of Nagorno-Karabakh, according to international agreements, never belonged to it and could not belong to it. They did not dare to recognize Artsakh as an independent republic, or to announce its annexation (as Russia did with Crimea). Losses in people (also making up an impressive figure of 2.3 thousand people) and technology... Well, that's what war and war are for. On the other hand, the Armenian side received, albeit an extremely painful, but more than timely lesson on how to and how not to prepare for armed conflicts. And the point here is not at all in the "outdated Soviet and Russian weapons", because of which Yerevan allegedly suffered defeat.

Such nonsense is written only by those domestic "patriots" who heart-rejoicing in any situation in which their wretched and evil minds manage to discern "defeat" or, moreover, "humiliation" of Russia. Outgoing with enthusiasm for the "broken and burnt Russian military equipment" demonstrated at the parade on December 10, Mr. Nevzorov and his ilk prefer to keep silent about something. Specifically - that in the ranks of the sort of victorious Azerbaijani troops was the same Russian (as an option - Belarusian) equipment. Here are just modernized, updated and equipped with trained crews. The Karabakh conflict was won not by "Turkish and Israeli UAVs", as some are trying to assert, but by the excellent training of the troops, who, unlike the Armenians, were preparing not for a "remake" of the 1992-1994 battles, but for modern warfare.

There are reasons to believe that Armenia will draw the right conclusions from their own defeat, and this is precisely the moment that is extremely unpleasant for Baku and Ankara. In this situation, the next time, things may turn out completely differently. And as for the notorious Turkish drones, which some "experts" have already appointed to the role of "wunderwaffe", as well as advisers and mercenaries from this country ... Will not the price of all this be great for Azerbaijan? Really, the parade, at which Recep Erdogan was present not as an honored guest, but as the owner of the new province of the Ottoman Empire he was reviving, and the number of Turkish soldiers marching in Baku was equal to the number of local soldiers marching in parade, suggests just such thoughts. Painfully, everything that is happening with Azerbaijan today looks like the final loss of independence and state sovereignty. And this is much worse than the loss of several mountainous regions of the "unrecognized republic" ...

I will not even try to argue with those analysts who assert that "Yerevan's involvement with Moscow will now increase significantly." However, relations between the countries are still allied. But the situation with Ankara and Baku is more like the beginning of the takeover ... The current (as, indeed, any) Turkish leader never does anything "just like that." It may happen that Azerbaijan will have to pay for its assistance in Nagorno-Karabakh by participating in military conflicts, which their Turkish "brothers" are stirring up almost all over the world today. In this case, the number of Azerbaijanis who died for the great-power ambitions of Ankara can very quickly exceed the number of those who gave their lives for the "return of the original lands." And this is just one of the consequences - the most obvious, literally lying on the surface.

For our country, for example, another aspect is much more alarming - those bellicose, aggressive statements that were made at the parade on December 10 by both Azerbaijani and Turkish leaders. Ilham Aliyev allowed himself to call Sevan, Zangezur and even Yerevan “primordial Azerbaijani lands”, announcing that they were “illegally occupied by Armenians”! Recep Erdogan went even further, beginning to read verses from the rostrum, in which they talked about "the occupied Azerbaijani lands south of the Araks." The Turkish leader's craving for beauty was immediately appreciated in Tehran - the Turkish ambassador was summoned to the local Foreign Ministry, to whom it was explained in detail that they did not intend to put up with either "territorial claims" (even if they were expressed in a rhymed form), and even more so with "Militant imperial expansionism" of Ankara. As you can see, the Turkish side believes that nothing is over yet and continues to push the Azerbaijani side to further adventures, despite the fact that this time it will definitely have to deal with the Russian army. Real winners don't act like that ...

By the way, the "poetic" incident with Iran perfectly illustrates the "viability" of Erdogan's ideas and humbly repeated by Aliyev about a "new format of cooperation" in the Caucasus region, which, in addition to Turkey and Azerbaijan, would also include Russia, Iran and Georgia. Well, and Armenia, but only if it "realizes and corrects." It is already clear what the Iranian side has about the Turks. In turn, Tbilisi declared that they would not sit down at any negotiating table if there was a place for the Russians behind it. In general, the "new format", as one old anecdote says, "died without being born" ... However, the reaction to the Turkish-Azerbaijani demarche followed from a rather unexpected side - from the United States. The statements about “new platforms” and the desire to “resolve the affairs of the region in a narrow circle” were quite rightly perceived there as a manifestation of Erdogan's desire to “rule” the Caucasus without any regard to the West, including his own NATO partners. And almost on the same day as they sounded, Washington started talking about the imposition of sanctions against Ankara, which can be announced literally "any day." The reason is the purchase by Turkey of the Russian S-400 air defense systems, which took place far from yesterday. The reason is clearly the excessively increased "independence" of Erdogan and his excessively growing appetites.

Baku can hold parades and broadcast about its "historical victory" as much as it wants. The Nagorno-Karabakh conflict is just a link in a chain of much more complex and large-scale processes. Time will tell who will ultimately be the winner and who will be the loser.
Ctrl Enter
Noticed oshЫbku Highlight text and press. Ctrl + Enter
We are
"We must beat first": the geopolitical alignment around Russia is continuously deteriorating
Ten "defeats" of Putin
Reporterin Yandex News
Read Reporterin Google News
15 comments
Information
Dear reader, to leave comments on the publication, you must sign in.