There are no forces left in Europe to stop its decline 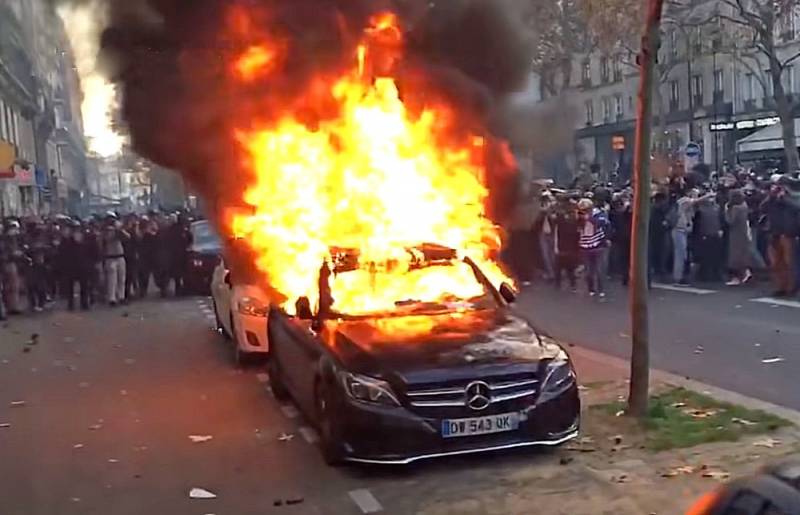 This issue is re-acquiring its relevance due to those political changes that have occurred in the camp of the suzerain of the united Europe. Because European leaders have a well-founded hope that Biden will not be as rude to junior NATO partners and allies as his predecessor. This is on the one hand. On the other hand, the Trump presidency, demonstratively bending over its vassals, showed that a subordinate position in relation to the United States can be very unpleasant and bring serious costs.


In this regard, the heads of European states, such as Merkel and especially Macron, began to make timid attempts to demonstrate their "sovereignty". And it is important to understand what it was - the first swallows of the future "European spring" and the restoration of true sovereignty, or the agony of the Old World, which will never turn into an independent player on the world stage?

How and why Europe lost its sovereignty

In general, the loss of Europe's geopolitical independence dates back to the post-war era. Defeated in WWII economy, as we all know, was restored using the Marshall Plan proposed by the United States. And again, it is generally known that the result of the implementation of the plan was not only the well-being of European countries, but also their becoming dependent on the economy of the Big Overseas Brother. Starting from this, the Americans from a certain time began to work closely on reformatting the European political elite in order to exclude the emergence of such independent figures as, for example, Charles de Gaulle.

Another aspect that influenced the loss of independence of the Old World was the creation of NATO. This military-political bloc was created to confront the "communist threat", and the United States, quite predictably, played the first violin in it. That was another step towards consolidating Washington's suzerainty over Europe.

But let us venture to suggest that the main factor in the loss of independence for the countries of the Old World was the desire to take a break from the constant wars that previously shook this part of the world with enviable regularity. For this reason, a significant part of the funds that were previously spent on defense began to be redirected to meet social needs, which America did not even think to hinder. Indeed, in this case, Europe's dependence only increased. And now NATO Secretary General Stoltenberg quite rightly points out that Europe cannot defend itself, therefore it must strengthen cooperation with the States.

All this proves once again the fact that as a result of 70 years of well-fed and comfortable life under the canopy of "American bayonets", European politicians have simply learned to rely on themselves. Therefore, Trump's rise to power and his open disdain for NATO allies came as a shock. "How so? Do you really have to do everything yourself? " Leaving the usual comfort zone into the cold unknown, looming before the nose of a collective Europe, has become a truly nightmare for the European elites.

We will fight again!

However, not for everyone. An attempt to ride the new trend was made by Emmanuel Macron, who volunteered to speak with the American leader on behalf of the entire united Europe, and then became famous for his statements about the "death of NATO's brain" and that European countries should be able to independently ensure their security. However, plans to create a kind of pan-European army called PESCO have taken place before, but at the moment it is impossible to talk about any visible success in the implementation of this project. On the whole, all the attempts of European leaders to demonstrate their independence and importance so far resemble the behavior of our former president and Prime Minister Medvedev: the presence of ambitions in the absence of the ability to realize them.

Therefore, it makes no sense to accuse the United States of destroying Europe's independence. Yes, they were able to bend the Old World under themselves, but this happened only because the Europeans themselves wanted it. This always happens when the striving for well-being comes first among certain peoples, and not preserving itself as a civilization capable of giving something to the rest of the world.

The choice is simple

I will not open America if I say that in terms of geopolitics, a country (or a union of countries, as in the case of the EU) has an extremely simple choice. Either participate in the formation of the political agenda, even if not at the global, but at the regional level, that is, to be an independent center of power, or “go with the flow” and play according to someone else's scenario. Most states are deprived of such a choice due to the lack of resources necessary for independence, but Europe still has the necessary potential, if only due to its scientific and technological development, which has not gone anywhere and will remain in the foreseeable future.

Why, then, does the Old World prefer to follow Washington's lead? We would venture to suggest that political sovereignty is associated not so much with scientific and economic opportunities, but with the issue of values, ideology, if you like. In order to be independent, you need to answer yourself the question, why is this independence needed?

The United States, for example, positions itself as a citadel of freedom and democracy, as a country that does not let the rest of the world "slide into the darkness of tyranny and authoritarianism." China is increasingly asserting itself as a society based on the principles of justice. It is worth noting here that at one time the project of such a society was proposed to the world by the Soviet Union, which ceased to exist just when its elite made a choice in favor of the same “freedom and democracy”. What does Europe have to offer?

Never mind. Well, not the principles of multiculturalism, freedom of same-sex marriages and the ability to choose from more than 70 options for their own sexual orientation? And they have nothing more to boast of, and for this reason, emigrants of recent years are no longer integrated into European society, unlike previous generations. Everything has a price, especially the rejection of the principles on which civilization has been held for many centuries. In the light of what is happening, the Old World is unlikely to shine for anything other than sunset. The only question is whether it will be slow or fast. We will find out in the next 20 years.

Is it all that bad?

But isn't the author speeding up the event? Indeed, in addition to militant liberalism in Europe, there are forces such as, for example, Marine Le Pen's Left Front, Alternative for Germany, etc., which seem to understand the disastrous path chosen by their governments. Everything is so, but so far they cannot seriously compete with their opponents. And there is reason to believe that this is not because huge resources are concentrated in the hands of the Euro-liberals. It's just that the same Le Pen is not drawn to de Gaulle or at least Pompidou. And so with any party advocating abandoning the current European course.

Why is that? A seized Europe has changed not only and not so much at the level of its elites. Let's take a simple example. Once in Amsterdam, they decided to hold a parade in defense of women during a wave of attacks on them by the same migrants. It seems to be a good, necessary thing. But in order to indicate their solidarity with the beautiful half of the Netherlands, men did not find anything better than to put on skirts and walk along the streets with posters. The migrants looked at this and realized that impunity was practically guaranteed for them.

Even the notorious "yellow vests" can hardly be considered a serious force, unlike, for example, the armed supporters of Trump, who would have long since come out in arms to defend his election victory if they were called to do so. It's just that Trump himself does not want to resort to the methods of his opponents, who took BLM activists out onto the streets.

And the point here is not at all that "one-story America" ​​has weapons in its hands, and the "yellow vests" do not. The fact is that this America still firmly believes in its ideals, and is ready, if something happens, to defend them with arms in hand. Therefore, in their political horizon, a person like Trump appeared, capable of going against the tide. Will there be people like the "impossible Donald" among European politicians? Hardly. Because even among ordinary Europeans there are too few of those who are ready to go all the way, as supporters of the 45th US President.
Ctrl Enter
Noticed oshЫbku Highlight text and press. Ctrl + Enter
We are
"We must beat first": the geopolitical alignment around Russia is continuously deteriorating
Ten "defeats" of Putin
Reporterin Yandex News
Read Reporterin Google News
Ad
We are open to cooperation with authors in the news and analytical departments. A prerequisite is the ability to quickly analyze the text and check the facts, to write concisely and interestingly on political and economic topics. We offer flexible working hours and regular payments. Please send your responses with examples of work to [email protected]
13 comments
Information
Dear reader, to leave comments on the publication, you must sign in.