Will Ukraine accept the Kremlin's “invitation” to the war over Donbass? 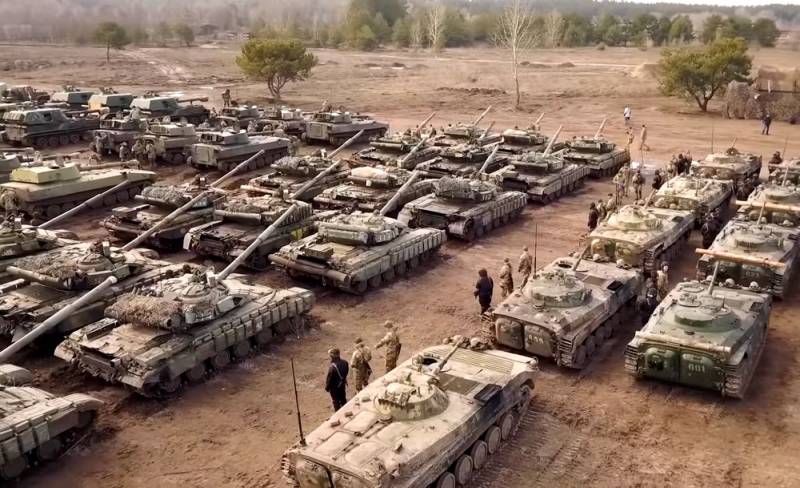 In the previous article I gave the example of Ukraine as an ideal springboard for the invasion of the Russian Federation by the forces of the anti-Putin (read anti-Russian) coalition. An ideal foothold, capable of leveling all the logistical and escalation difficulties that NATO currently has in conducting hostilities in a theater of operations remote for itself. And one cannot say that the Kremlin does not understand this.


It is not necessary to hope that non-brothers will not have enough spirit for such an act of self-destruction. Enough! With no head on their shoulders, this is the only thing they have in abundance. And if it’s not enough, the new owner of the Oval Office came across the ocean, very perfumed, he, if anything, would add motivation to the natives, ambition, despite his age, he has enough. We also do not forget about the mad grandmother Clinton dangling in his wagon train, the old woman simply pees with turpentine, seeing herself at the head of tank columns heading for Moscow.

How the Kremlin is going to get out of this stalemate, I don't know, it looks like they are going to knock out like a wedge. At least, there is no other way I can assess Putin's statement, which he gave to the special correspondent of Russia 24, the other day.

Putin directly invites Ukraine to invade Donbass and says - we will not intervene, there are no legal grounds, citing the example of the NKR. I quote verbatim:

Armenia did not recognize the independence and sovereignty of Nagorno-Karabakh. From the point of view of international law, this meant that Nagorno-Karabakh and all adjacent regions were and are an integral part of the Republic of Azerbaijan, which it had every legal reason to return ... After all, no one encroached on the territory of the Armenian Republic, and this gave us no right to accept direct participation in hostilities [on the side of Armenia].
What follows from this? Let's speculate. Has Russia recognized the independence of the LPNR over the past 7 years? No! Maybe someone else recognized, for example, the UN Security Council? Also no! What does this mean in terms of international law? That Ukraine has every legal basis to return these territories to itself in any way convenient for it. Looking at the recent example of Azerbaijan, only one conclusion can be drawn - the military way of solving problems is quite acceptable, and most importantly, effective. Maybe someone in the international community has come out with a condemnation of such methods? I did not hear. There was talk only about the inadmissibility of civilian casualties. But it did not die there, only the military died, and who will sort them there? Russia did not intervene because there was no reason. So Putin said.

So Ukraine - welcome, you are welcome, return Donbass by military means, all the same, negotiations with the Russian Federation do not end with anything. How long can the Minsk group be bullied? On the NKR, the Minsk Group also met, for 28 years. So what? Until Aliyev returned it to himself with fire and sword, nothing changed. The main thing is to choose the right moment for this and acquire a good ally. There is no shortage of allies. And the nearest convenient moment will arise already in 2024, closer to March 17. Russia will definitely not have time for Donbass then.

One problem is that in Ukraine there is absolutely no social request for the return of Donetsk and Lugansk; rather, they would like to return Crimea, but they really understand the doom of this venture. A paradoxical situation has developed when the Russian Federation is more interested in the return of Donbass (as a kind of Trojan horse) than Ukraine would like to return it. She now only lacks the problems of Donbass, she would have to deal with the existing problems. And she also doesn't know what to do with the population living there. Drive them to filtration camps, deprive them of the right to vote, and disqualify their rights for 10 years or more? So many problems arise at once. Why does she need them? She does not even need a deserted territory. She also requires money for maintenance, but they have no money for their own maintenance, they are tortured to beg for alms from the IMF. They have been standing on the porch for the seventh year. And do not forget the most important reason - so many people really profit from this war, so many problems can be attributed to it. Putin is to blame for everything! We have a war here! Russia is the aggressor! And then again - and Donbass returned. What are these bawlers to do? The last meaning of their existence will disappear from them. The war party is not geared towards solving peaceful problems. Do you want to leave all these people out of work?

And then suddenly Putin appears, all in white, and says - Azerbaijan had all legal grounds to solve its territorial problems by military means, he fought on its territory, and the Russian Federation had no legal grounds to intervene in this conflict, because Armenia itself did not recognize problem region for their own. If in Kiev they know how to read lips, then the parallels suggest themselves. Donbass is the territory of Ukraine, it has every legal basis to return it to itself by military means, Russia will not interfere, because there is no legal basis. Now, if / when the Russian Federation recognizes it and introduces its troops there officially (at least as peacekeepers), then this window of opportunity for Ukraine will close. Now the ball is on the side of Ukraine. Will she fall for the Kremlin's bait, will she accept the invitation to war?

Why is the plan bad for solving all the latest problems of the Russian Federation? Solve all issues at once with one blow. And with the re-election of the GDP for a new term - after all, horses do not change at the crossing. And with the disposal of country 404 and the elimination of this abscess by surgery, the demolition of the anti-Russian fascist regime established there through the efforts of our overseas "friends and partners" and the complete nullification of the project. What will appear there as a result will be dictated by the Russian Federation as a winner. After all, Putin promised the loss of statehood in the event of an invasion of Donbass? Putin does not throw words to the wind. But Ukraine is still fighting only in the information space.

PS Meanwhile, on Wednesday, November 25, Chinese leader Xi Jinping met with the military leaders. On it, for the second time already (the first was in October), he urged his troops not to be afraid of death and hardship and focus on preparing for victory in the war. With whom he was going to fight, we know. If / when such a mess begins, then our servant of the three masters may have a desire to solve her territorial problems under the guise of a war of geopolitical monsters. I think the States will not strongly object to tying the hands of the Russian Federation in this way in order to diffuse its resources if it takes the side of China.
Reporterin Yandex News
Reporterin Yandex Zen
58 comments
Information
Dear reader, to leave comments on the publication, you must sign in.