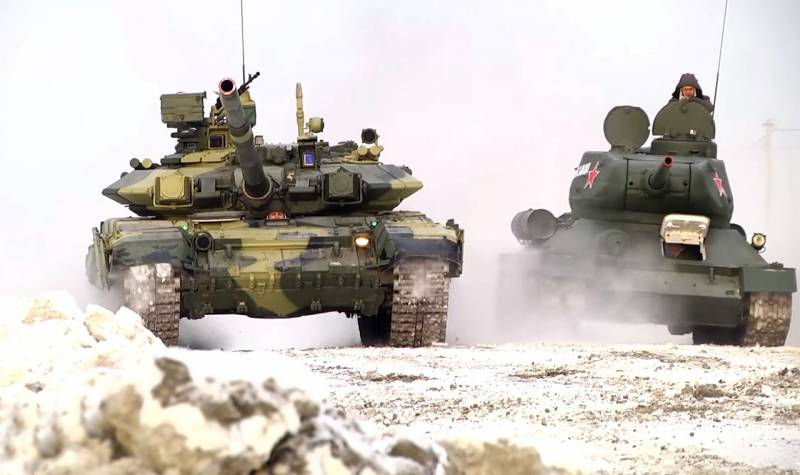 Epigraph: "We are not going to fight with anyone, we are trying to create conditions so that no one would try to fight with us!" (V.V. Putin)


Taking part not so long ago in the special TASS project “20 Questions for Putin,” the Russian President, answering the questions of journalist Andrei Vandenko in the block dedicated to the state of affairs in the army, opened the veil of secrecy about equipping the RF Armed Forces with modern weapons. It turned out that lagging behind its opponents in terms of expenditures for maintaining combat readiness (the Russian Federation is only in 8th place on this list with $ 48 billion, yielding not only to the United States, which is in 1st place with $ 750 billion / year, but also China, CA, India, Britain, Germany and Japan, just think, even Saudi Arabia and India are overtaking us!), We have contrived during the years of Putin's rule the percentage of equipping the RF Armed Forces with modern technique raise from 6% in 2000 to 68% in 2019.

Somewhere in these percentages our new main battle tank (MBT) T-14 "Armata", and a self-propelled 152-mm artillery unit (ACS) based on the T-90 2S35 "Coalition-SV" tank, and a self-propelled 57- mm anti-aircraft artillery system based on BMP-3 2S38 "Derivation-Air Defense", and heavy infantry fighting vehicle on the basis of T-14 BMP T-15 with combat module "Dagger", and medium BMP B-11 "Kurganets-25" with combat module "Epoch", and heavy combat vehicle support for tanks BMPT "Terminator-2", about the improved and modernized our main battle tanks (MBT) T-80BVM and T-90M "Breakthrough-3" is not even talking about.

Armor is strong and our tanks are fast

But it would seem that new combat vehicles and tanks are being developed, tested, and even run-in in real combat in Syria, but they are in no hurry to join the troops. The Ministry of Defense orders them so far only in small batches. Why? The fact that it is expensive is only one answer.

The main answer is different. The concept of war has changed. The war of motors gave way to the war of wings. Still, the 21st century is in the yard! Why seize territory when you need to paralyze decision-making centers? And this requires not tanks, but missiles and planes. The tanks will enter later, when there is already no one to fight with.

If someone takes the trouble to study the map of the location of our main defense plants, he will, to his surprise (or not surprise), discover that they are all located mainly beyond the Urals. Irkutsk, Novosibirsk, Komsomolsk-on-Amur, Kazan, Kumertau (Bashkiria), Arsenyev (Primorye), Ulan-Ude - aviation industry; Nizhny Tagil (Uralvagonzavod), Kurgan (Kurganmashzavod), Yekaterinburg (Uraltransmash) - tank industry, production of armored combat vehicles (AFV). All this did not happen by accident. Since the time of the last war, our defense plants from the European part of the Union were evacuated to the Urals and beyond the Urals, and they remained there. During the Second World War, the Germans could not reach them even for the modern conquerors of Russia, to get to them, you need to fly half of Russia, crawl, plow. And this is an impossible task for any conqueror. But since we ourselves are not going to attack anyone, we have to be ready to repel an attack on our territory. That is, to paraphrase Putin, we are preparing for a potential war on our own territory. And for this, the existing AFV fleet is still enough for us.

Thousands of storage units for armored combat vehicles are located in units of varying degrees of combat readiness (from permanent combat readiness units to reduced and cropped units), not counting the storage bases for weapons and military equipment (BHRVT), and central reserve bases for equipment (CBRT). Do not throw away the good ?! Therefore, the Ministry of Defense of the Russian Federation chose the path of modernization of the existing fleet of armored combat vehicles, which is not yet morally obsolete, with the parallel development of new models of military equipment, which our defense industry can launch into mass production at the first request (equipment and documentation for this are already available, new equipment in small batches manufactured and supplied to the troops, where it undergoes the last field tests).

Conventionally old tanks were turned into modern formidable combat vehicles, which in their characteristics are not only not inferior, but in many respects superior to Western models. 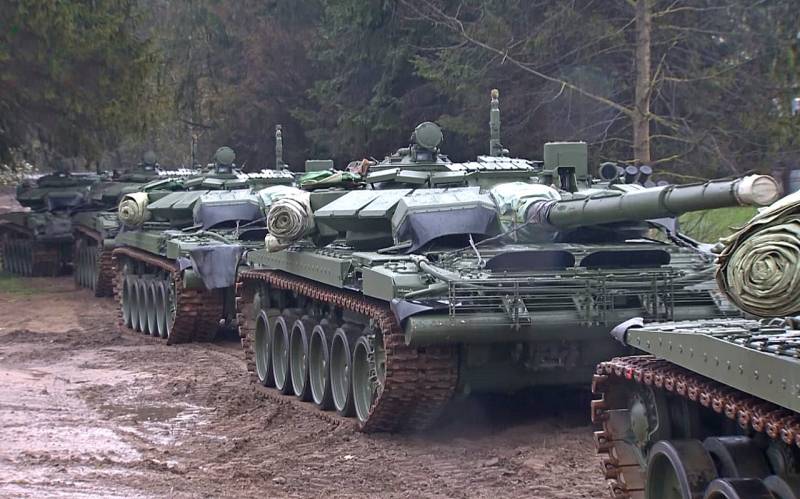 Our main battle tanks T-72B3M and T-80BVM fell into the first group for modernization, as a result of which they were equipped with similar sighting systems, elements of reactive armor "Relikt" and communications equipment. Their 125-mm guns are capable of firing both conventional shells of various types and long-range guided missiles with tandem warheads. The main difference between these tanks is the type of engines used: the first has a diesel with a capacity of 1130 hp, and the second has a 1250-horsepower gas turbine, better adapted to work in low temperatures.

The first batch of thirty modernized T-72B3Ms this year has already entered the tank division of the Central Military District stationed in the Chelyabinsk region. In addition to the more powerful 1130 hp engine. the tank received an improved set of weapons, aiming and control. In particular, the automatic gearshift, digital display and TV rear view camera. The modernization also touched the protection of the hull: the combined multilayer armor is reinforced with side screens with modules of reactive armor "Relik", hinged lattice screens, as well as additional modules of reactive armor in a "soft" hull. This explosive reactive armor was tested in Syria, where it successfully withstood the hit of an anti-tank missile, after which all our MBTs began to be equipped with it. 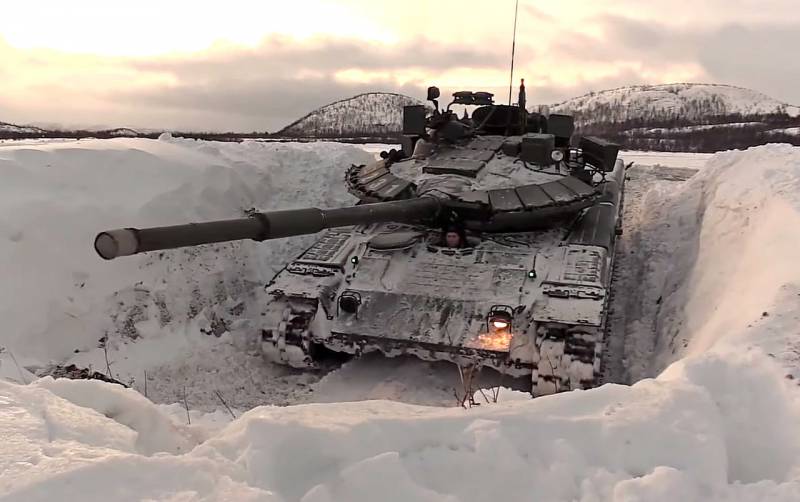 T-80BVM has been modernized and upgraded specifically for use in the Far North, for which it received the name "Arctic". The tank began to enter the northern divisions of USC Sever, Center and Vostok last year. In addition to the 125-mm cannon, combined with the Reflex rocket launcher, which replaced the Cobra complex, which was equipped with the previous version of the T-80BM (Reflex, unlike the Cobra, has an increased launch range and is adapted for modern missile weapons) , the tank is complemented by two machine guns - NSVT and PKT, and all weapons are controlled by the Sosna-U complex with a thermal imager, a modern laser rangefinder and a target tracking system. The power plant allows the tank to reach speeds of about 70 km / h even in off-road conditions. According to a number of military experts, the T-80BVM is on par with the T-72B3 and T-90M tanks in terms of combat qualities. 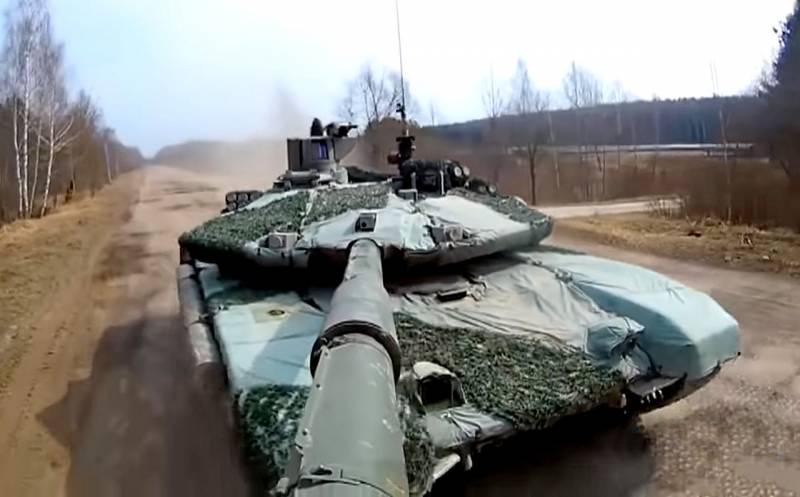 T-90M "Breakthrough 3", which have recently begun to enter the troops, are already a new generation of military equipment. According to their characteristics, they are in no way inferior, and in some parameters they even surpass the best foreign samples. Including those recently adopted for service. Compared to the export version on the T-90M, the structure of the rear of the tower has been significantly strengthened, the fenders have been changed, and an anti-slip coating has been applied, which was previously used only in the T-14 "Armata". The T-90M is currently one of the most advanced mass-produced tanks in the world.

Its main multilayer armor, reinforced by the Relikt universal modular explosive reactive armor, is capable of effectively countering foreign high-speed armor-piercing subcaliber projectiles, as well as guided missiles and rocket-propelled grenades. The 125-mm cannon is capable of using a wide range of various ammunition, including laser-guided projectiles. To combat manpower, there is a coaxial 7,62-mm machine gun. The remotely controlled 12,7-mm installation can work both for air and ground targets. The existing fire control system makes it possible to use weapons by the gunner-operator and the vehicle commander at any time of the day. A multi-fuel diesel engine with a capacity of 1130 hp. provides high mobility characteristics. The fuel range reaches 550 km. 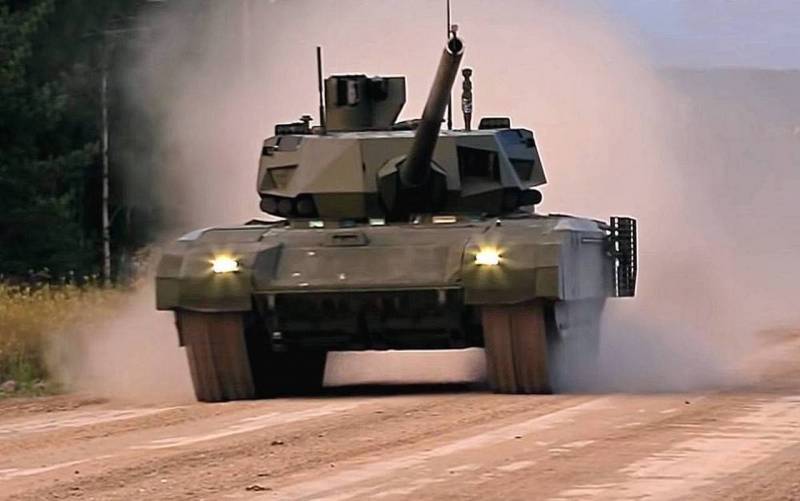 The technical characteristics of our newest tank T-14 "Armata" are still classified. We only know its weight (55 tons), caliber and brand of gun (smoothbore 125-mm 2A82 or 152-mm 2A83 on demand), ammunition (45 rounds), the presence of machine guns (1 × 12,7-mm Kord and 1 × 7,62 , 12-mm PKTM), engine type and power (360N1350 - 1500/1800/90 hp, varies depending on the boost), speed (up to 60 km / h on the highway, 500 km / h on crossroads), stock course (3 km on the highway), crew (14 people). "Armata" is the first tank in the world that implements in its design concept the concept of "network-centric warfare", where the T-90 is used primarily as a reconnaissance vehicle, target designation and fire adjustment of self-propelled guns, air defense systems and T-14 tanks from the accompaniment of its tactical link ... To do this, the T-360 has a circular Doppler radar with a mid-range AFAR, ultraviolet HD surveillance cameras with 72 ° circular coverage, capable of detecting the operation of engines of equipment by exhausting ionized gas. The tank is also capable of launching the Pterodactyl unmanned reconnaissance and targeting vehicle with its own surveillance radar and infrared sight. From here it becomes clear that many such fire control tanks are not yet needed in the RF Armed Forces, it acts as a head control tank in a group of conventional tanks (T-80, T-90, T-20). While 100 aircraft have been delivered to the Armed Forces, the contract provides for the supply of another XNUMX units. This is the only tank in the world with an uninhabited turret so far.

The T-14 is equipped with a new generation of the Afghanit active protection complex, capable of intercepting even anti-tank shells, and it is safe for the infantry and equipment surrounding the tank, to blind anti-tank guided missiles by using "smoke-metal" curtains, by spraying opaque metal particles in the range from microwave to far infrared spectrum. The tank is equipped with the fourth-generation dynamic armor Malachite, capable of repelling with a probability of more than 95% shots from hand-held anti-tank grenade launchers, as well as destroying modern sub-caliber anti-tank shells, even fired at the side of the tank ... Some sources claim that Malachite is the first in the world of electrodynamic armor with the possibility of throwing an armor plate at an incoming ammunition even before contact with the armor according to the Afghanita radar data, or according to the projectile's own magnetic field sensor, or ATGM. Multilayer metal-ceramic frontal armor of the tank, equivalent to 1 meter of homogeneous metal armor, which, according to the manufacturer, cannot be penetrated by existing shells and anti-tank missiles. The T-14 is essentially a "stealth tank" with a dramatic decrease in visibility in the infrared, radio and magnetic ranges, which reduces the target capture distance of the seeker ATGM "Javelin", "Spike" or "Brimstone", and similar to them in 2,7 times, even without the use of aerosols by the tank.

As you can see, this is just some kind of monster, not a tank. There are no equal to him in the world yet. We can do as much as we want. At the moment, there is no need for large quantities of it. Opponents so far cannot oppose anything that we already have in service.
Ctrl Enter
Noticed oshЫbku Highlight text and press. Ctrl + Enter
Reporterin Yandex News
Reporterin Yandex Zen
59 comments
Information
Dear reader, to leave comments on the publication, you must sign in.