Is an alternative to democracy possible in Russia 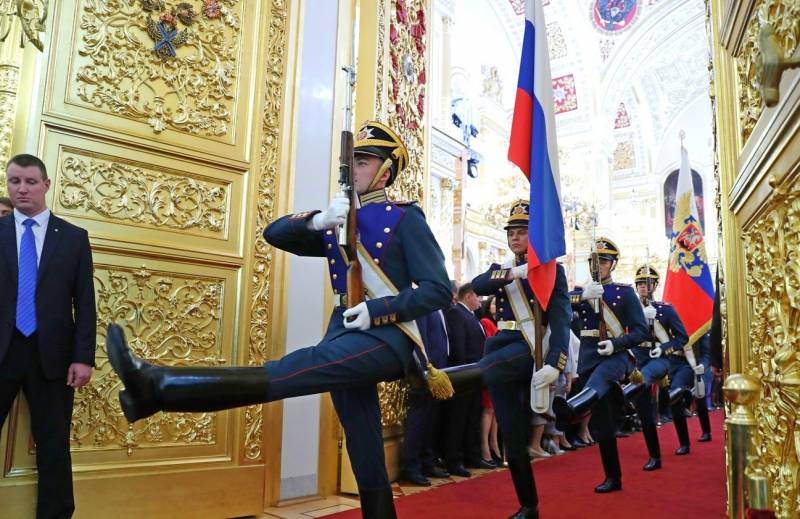 Real, and not declared, sovereignty at the present time is not such a common thing. There are very few countries in the world that are able to make independent decisions without relying on the position of a stronger ally or without playing on the contradictions of two or more powers that have real sovereignty. And Russia, with all its external and internal problems, is undoubtedly one of the states that enjoy the right to conduct an independent policies.


Of course, this fact does not at all please our "partners", primarily the Western ones, since it prevents them from dictating their will to the rest of the world. After all, if our country did not possess sovereignty, then, for example, we would not see the revival of China as one of the leading foreign policy players. Because the United States would not have to spend so many resources on containing Russia, and they would put all their efforts into moderate the appetites of the Celestial Empire, which poses an increasing threat to their world hegemony.

But this is not the only point and not so much. And the fact that, as you know, our country is perceived by the West as an existential threat simply by the fact of its existence. We are too different from the same Europe throughout its history - either pre-Petrine, imperial, or Soviet. In general, for them we are carriers of alien values.

And, of course, we cannot discount the fact that some people would very much like to have at their disposal those natural resources that are under the control of Russia. Madeleine Albright also said in this regard that it is economically expedient to leave about 15 million people to live in the territory from Smolensk to Vladivostok. Does Hitler's plan "Ost" remind anyone?

Therefore, attempts to deprive us of our sovereignty are being made and will continue to be made. Not a single person in his right mind and sober memory would think that after the failure of the "white tape" movement in the West, everyone surrendered. After all, the roots of the problems in the countries-allies of Russia in the CSTO, as ordered by the emerging this year, grow from the same place. The unrest in Belarus and Kyrgyzstan, the war in Karabakh did not arise out of nowhere. The goal pursued by those behind these events is very simple. They need to create problems for our country, draw them into conflicts that are disadvantageous to us, weaken them, then deprive them of foreign policy independence and, as a super task, play out the Yugoslav scenario. Moreover, our "partners" do not even hide this.

Enough has been written and said about all this, but there is one more tool with which it is possible, if not to deprive the country of its sovereignty, then at least to limit it. Which our "partners" are trying to use now, and will certainly continue to use it in the future. This tool, oddly enough, is democracy, or to be precise, democracy in its Western reading. What exactly are we talking about? Let's explain now.

For a long time, both us and the rest of the world have been convinced that the political system of European countries and the United States is almost the only way to progress. And it will not work at all to trample the path to true freedom in another way. And if at first the majority of people really believed in this, then over time, looking at what is happening in Yugoslavia, Iraq, Libya, and in Russia, belief in "true democracy" increasingly gave way to a kind of democratic atheism.

And the presidential elections in America in 2016, and especially in 2020, have become further evidence that they are not particularly interested in freedom or human rights overseas. And this has always been the case, at least since the time when the United States became one of the world's main centers of power. Everything is still decided by the elites. But then a reasonable question arises - why do we need democracy at all?

We would venture to suggest that only in order to create the illusion of participation in political life among the masses and in a visible way to legitimize their power. Since for managing the masses, there have long been worked out by many years, if not centuries of practice Technology... And those who have sufficient financial resources for this will always be able to impose the necessary way of thinking and behavior on the bulk of the population. And those who try to appeal to common sense can be turned into marginalized with the help of the "free press".

The collective West works in the same way not only on its own territory, but throughout the world. And numerous NGOs, educational programs, mass culture are tools for shaping public opinion. And when there are enough people with a mentality formed in this way to build a smaller copy of a western country on the site of this or that country, it is the institutions of democracy that contribute to this. When it fails to achieve the goal in this way, an attempt is made to arrange another "color revolution".

The architects of this new world order are by no means the Masons or the notorious "world government", but the heads of the largest transnational corporations, who do not even think to hide their intentions. One has only to read or watch on YouTube the public speeches of the same Gates, Bloomberg, Rockefellers, etc. They will never give up their goals, and their potential should not be underestimated, but also unnecessarily exaggerate and shout "Help!" it does not follow.

The fact is that these gentlemen, despite all their financial and administrative capabilities, are far from omnipotent. All people make mistakes, but those whose aspirations are dictated exclusively by ambitions of a cosmic scale, sometimes make mistakes more often than others.

But back to democracy, and note that it was a reaction to feudalism, which took into account only the interests of the nobility. By the XNUMXth-XNUMXth centuries, the bourgeoisie had accumulated enough resources to influence the policies of their states, but was deprived of such an opportunity. And it is in this that one should look for the reasons for the English, French, and partly Russian revolutions. Is it any wonder that the wealthiest bourgeoisie of the XX-XXI centuries also use such a familiar tool in this environment as democracy as an effective way to advance their interests in the first place? Therefore, a society that does not want to become a plaything in the hands of the "rulers of this age" must reduce the possibility of the coalescence of power and private interests to a statistical error.

In Russia, after Putin came to power, serious steps have already been taken in this direction, for example, removing the most insolent oligarchs like Berezovsky and Khodorkovsky from power. But this process is still far from completion. How far is it even to the final rejection of the piety experienced by our elite for the social structure of Western countries, which it is ready to blindly imitate. And therefore, if the current president's internal political course after his departure from power not only remains unchanged, but also begins to be implemented with greater energy, we can safely say that there is no need to worry about the future of our country.

“Okay, the author is trying to prove that democracy is bad, but what is the alternative?” - the reader will rightly ask. There is an alternative, and it is based on two historically verified principles with the help of which our country was formed: a strong government plus a built-in feedback with the people. But at the same time, it is worth remembering that such a system cannot be built without the most important thing - without devotion to one's country and the feeling of the state as one of the main personal values. It is no coincidence that in Russia they have long been seen in a strong tsar as an intercessor - from the arbitrariness of the "boyars", from the raids of predatory neighbors and from much more.
Reporterin Yandex News
Reporterin Yandex Zen
28 comments
Information
Dear reader, to leave comments on the publication, you must sign in.