By ending the war in Nagorno-Karabakh, Russia saved Donbass and Transnistria 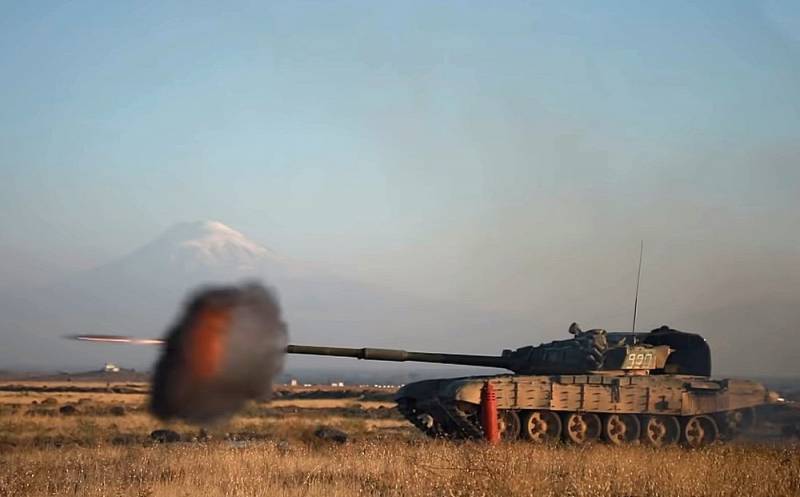 The coming of peace and the end of bloodshed are always wonderful. This applies in full measure to the end of the military confrontation between Armenia and Azerbaijan over Nagorno-Karabakh. However, in this particular case, having played a brilliant military-diplomatic "party" and forcing the parties to stop hostilities on the most acceptable conditions for itself, Moscow not only saved from quite probable "ethnic cleansing" or, at least, from the forced flight of residents of the "free Artsakh ".


The threat of exactly the same fate has been allotted (at least for the near future) also from other "unrecognized republics" seeking support and protection from our country.

Let's start with the essence: if events developed according to the scenario that, in fact, were counted on in Baku, and, above all, in Ankara, this would create an extremely significant and absolutely unacceptable precedent for Russia. We are talking about a successful return to the rule of one or another state through a military operation of "rebellious" territories, which were once a part of it for some reason, but did not want to remain so. Let's be frank - as of the day before yesterday, there were practically no real obstacles to realizing just such a prospect. The surrender of the strategic defense point of Shushi to the Azerbaijanis put the NKR military formations and the Armenian forces supporting them not only at a disadvantage, but literally in a catastrophic situation. The capture of Stepanakert and the fall of Artsakh, in fact, were a matter of a few days, if not hours. However, the agreement concluded between Putin, Aliyev and Pashinyan forced Baku to abandon a complete and final victory, which, in fact, was already "at arm's length." Very weighty arguments were probably made by Vladimir Vladimirovich ...

And by the way, Erdogan's signature under the document is not. And the peacekeeping contingent in Karabakh is Russian, not Turkish. And not even mixed. Whatever they try to say in Baku and Ankara about some kind of "participation" and "observation", our tricolor will flutter over the Lachin corridor, and not a red banner with a crescent. And watch - watch who is against. Only, as they say, keep your hands to yourself. The main thing is that Nagorno-Karabakh does not come under the authority of Azerbaijan, but remains in the state of an autonomous enclave, albeit not legitimized, and even receives real protection in the person of Russian peacekeepers. Now anyone who tries to storm it will have to deal with Moscow, not Yerevan.

Let's return, however, to our main topic. The problem of "unrecognized republics" in all its acuteness arose at the end of the last - the beginning of this century, that is, during the collapse of the USSR and the countries of the "socialist camp". The secession of Transnistria from Moldova, the self-determination of Abkhazia and South Ossetia ... Back in 2000, there was a whole Union of unrecognized states, which some call the CIS-2. In 2014, the Donetsk and Lugansk people's republics were added to this list. All these small but proud enclaves are united, in addition to a lot of common features, and one more - each of them tried to "calm down" with fire and sword. At the same time, such attempts, as a rule, were policy, who at one time shouted louder than anyone about the “right of peoples to self-determination” and reproached Russia for “imperialism”. The last such escapade was undertaken in 2008, do not be remembered by Mikheil Saakashvili by nightfall, for it is not clear with what joy he imagined that NATO would fully support his military adventure with all its might.

Nothing of the kind, of course, happened, the thugs who were wiping Tskhinvali and our peacekeepers off the face of the earth fell on the nuts, and Miho was forced to switch to a low-calorie tie diet. Well, and then completely retrain from presidents to governors of Odessa. There, however, he did not work out either, but that was not the point. The failure of the 2008 Georgian "blitzkrieg", as well as Kiev's shameful attempts to "de-occupy" Donbass in 2014-2015, very much cooled the "hot heads" in some nationally preoccupied states that clearly overestimate their military capabilities and foreign policy weight. They have firmly learned: the North Atlantic bloc will not fight for them, and it is more expensive for them to contact Russia.

"Ukrainian Shusha" and other dangerous fantasies

The military successes of Azerbaijan in the current campaign have generated an extremely unsafe "ferment of minds" and a certain revaluation of the issue described above. It turns out that you shouldn't rely on loose, clumsy and always cautious Brussels! And even Washington shouldn't be courted! It is enough to "make friends" with a not so powerful militarily as the United States, but the most aggressive country, ready to support your plans to "restore territorial integrity" by real force - and the trick is in the bag. Having imagined itself as a new incarnation of the Ottoman Empire, modern Turkey with its actions in the Caucasus not only sets a bad example for all those who dream of “de-occupation” and forced “reintegration”, but is actually pushing not only Azerbaijan to war. It is not for nothing that its "military cooperation" with Kiev, still unable to settle down, just against the background of the war in Nagorno-Karabakh, has blossomed in full bloom, having received a new powerful impetus. The ruin, as the Bulgakov professor used to say, is in the heads - and just in the skullcaps of Ukrainian patriots on this occasion, an unprecedented seething of their simple contents began.

They really perked up due to the new perspectives, which seemed extremely attractive to them! “We were very clearly demonstrated exactly how to win in Donbass ...“ Bayraktars ”, an alliance with Azerbaijan and Turkey - all of this we already have or may receive soon” ... Horlivka is the Ukrainian Shusha and our army will take it ... Everything can be solved elementary, we just need allies who, instead of praising for "peacefulness", will provide us with "Bayraktar" - just such and other similar "revelations" the social networks and messengers of the "nezalezhnaya" were full of after the news of the capture of Shushi. Now, of course, there is a dreary calm in them ...

Alternatively, gifted sofa "strategists" from Kiev, Lvov and Zhashkov, with their little minds, were unable to compare the difference between the situations with Nagorno-Karabakh and Donbass, unable to understand that the way they see them in feverish "bayrakty" dreams, would not have happened in any way case. In Artsakh, unlike the DPR and LPR, there are not and never have been thousands of people with Russian passports. Russia has good-neighborly and partner relations not only with Yerevan, but also with Baku (but not with Kiev!). Our country does not have good logistical capabilities to provide military assistance to Armenia, but the situation with Donbass is exactly different. The same (only, so to speak, with the opposite sign) applies to Turkey. And Pashinyan, with his "Maidan" past and clear pro-Western orientation for Moscow, is not at all the same as the leaders of Donbass.

The list goes on and on, although the above is more than enough. Nevertheless, if the Azerbaijani army took Stepanakert after Shusha (and everything went to this), then any logical arguments would be "patriots" pushed further away. And the arguments of reason ... Modern Ukraine and reason are concepts that are incompatible by definition. It could well have turned out that under the influence of other people's victories and, as in the Azerbaijani case, persistently "pushed under the elbow" by Ankara, the local "Napoleons" would have decided on the most desperate and insane attempt. In the end, as they say in Ukraine itself, “a bad thing is simple”: they would spank drones (the Turks would also throw them “from the sultan’s shoulder”), and they would move Donbass to “de-occupy” it. This would hardly happen in today's Moldova, but who knows who will be in power in this country tomorrow? Believe me, there are enough individuals with similar intentions regarding Transnistria.

Peace accords on Nagorno-Karabakh have become a real cold shower for those who have been looking enviously news from this war, "trying on" other people's victories. The most important thing here is the appearance in the Caucasus of a new powerful grouping of Russian peacekeeping forces. If, again, we try to project the situation onto Donbass, then it becomes clear that any attempt to act there according to the “Karabakh scenario” will lead to the appearance of a Russian flag over the same Horlivka, not a green one. And on absolutely, mind you, legal grounds. "The West won't give it?" And where was the West when Vladimir Vladimirovich dictated the terms of the truce to Pashinyan and Aliyev? Here's the same ... This is also a very good lesson for "especially frostbitten". By the way, from the very beginning, Putin offered the "Maidan" figure from Yerevan to sacrifice small - the regions around Karabakh, seized in 1992 and turned into a "security belt". It was possible to get off with much smaller losses than now - both human, and territorial, and image. If you don't listen, blame yourself. It would have been even worse further, but only for Russia it was already categorically unprofitable. Kiev should also think about this moment. Perhaps when the turn of the local "leaders" comes to listen to the Kremlin's ultimatum, they will remember the sad experience of their Armenian counterpart and show at least some prudence.

One way or another, but the degree of Russia's success in the Caucasus can be assessed at least by how much negative reaction it has caused from our Western "friends". Former commander of the US Army in Europe Ben Hodges has already shown the rudeness inherent in his compatriots by declaring the Russian peacekeepers in Nagorno-Karabakh (as well as in any other part of the world) as "occupiers." On what grounds? But because they are not American! Well, since Washington clearly does not like this alignment, then everything has been done correctly. Meanwhile, in Ukraine, the "experts" who have somewhat recovered from the shock are refining themselves in fabrications on the theme of "Moscow's geopolitical defeat in the Caucasus" and, accordingly, "the victory and strengthening of Turkey" in this region. My condolences ... However, the calls for "de-occupation of Donbass in Karabakh" died down at once. And this is the main point.
Reporterin Yandex News
Reporterin Yandex Zen
13 comments
Information
Dear reader, to leave comments on the publication, you must sign in.