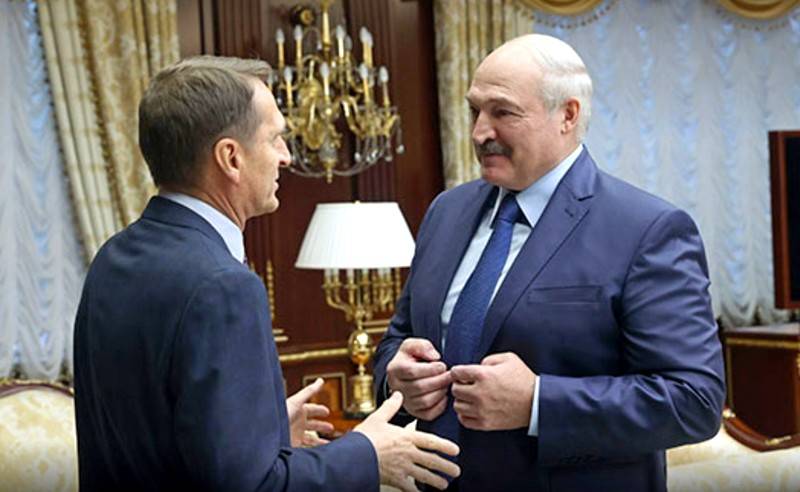 Last Thursday, the head of the Foreign Intelligence Service (SVR) of Russia Sergei Naryshkin came to the Belarusian capital with a personal visit to President Lukashenko. Since the head of state usually negotiates at a different level, this event has attracted the closest attention. What could Sergei Evgenievich and Alexander Grigorievich discuss among themselves?


It is worth noting that President Lukashenko himself expressed himself rather ambiguously on this matter:

Yes, we do not hide the fact that the situation around us is not easy, I mean the Union State.
Indeed, this “difficult situation” has an internal and an external component, which the head of the RF Foreign Intelligence Service should have discussed with the Belarusian leader. "External" is just in his part.

Let us remind you that in a few days the so-called "ultimatum of Tikhanovskaya" expires, which threatened to paralyze normal life in Belarus if Alexander Lukashenko does not resign. In particular, she called for a strike by railroad workers. Objectively, Svetlana Georgievna, being abroad, does not have the appropriate financial and organizational resources to organize something similar. It is unlikely that the Belarusian law enforcement agencies will calmly stand and watch how some people in their country block the railway tracks. But perhaps this is exactly the idea.

At the end of September, it was Sergei Naryshkin who warned that a large-scale provocation was being prepared in Belarus with the active assistance of the American special services:

In working with the Belarusian opposition, the Americans are shifting their focus to increasing the activity of its power wing from among the radical nationalists. The State Department has launched work to involve extremist elements in the protests.
Then, as a resonant reason, Russian intelligence called the possible murder of a priest of the Belarusian Catholic Church in order to involve religious communities in participation in mass protests. It is not excluded that something similar is planned in Belarus again, which will be carried out as part of a provocative attempt to block the normal activities of the state and its infrastructure. Perhaps this will be done with the connivance or even assistance of some officials interested in a change of power in Belarus. In this context, the visit of the SVR head to Minsk for personal communication with President Lukashenko makes sense.

However, the "difficult situation" around the Union State has its own internal component. Lukashenka’s victory in the presidential elections with a fantastic result caused great mistrust both in Belarus and in the West. If you call a spade a spade, then Alexander Grigorievich stayed in power only on the bayonets of the security forces and with direct support from the Kremlin, which expressed its readiness to send him help. It will not be surprising if Moscow is now expecting real progress from Minsk in the stalled integration within the Union State.

However, this is not happening yet. The topic of constitutional reform, which is vital for the peaceful transit of presidential power and ensuring political stability in Belarus, is now openly chatting and clouding. It is understandable that Alexander Lukashenko's desire to put the case on the brakes is understandable, but hardly anyone will agree to this now. The train left. It is quite possible that the head of the SVR arrived in Minsk, among other things, to delicately remind about this.
Reporterin Yandex News
Reporterin Yandex Zen
13 comments
Information
Dear reader, to leave comments on the publication, you must sign in.