London, Ankara and Kiev are preparing an international conspiracy against Russia 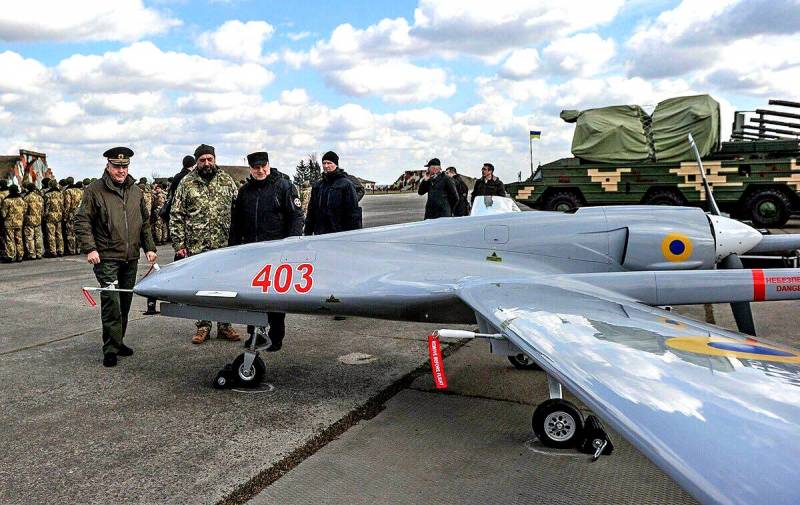 Many experts and observers, and not only in Russia, have already managed to scathingly and skeptically enough about the "new initiative to restore the territorial integrity of Ukraine" recently announced by Volodymyr Zelensky, which does not shine with originality. This is, they say, "another stillborn idea", voiced exclusively within the framework of pre-election PR and initially has no prospects. It would be nice if this were the case in reality. However, the reality, alas, is very far from such superficial and "shabby" assessments.


This time we are dealing with much more than the idiotic chatter of a comedian president. Those who view this moment exclusively in the “Ukraine-Turkey” plane are deeply and fundamentally mistaken. Unfortunately, everything is much larger - we have before us an international conspiracy, the roots of which should be sought not at all in Kiev or even in Ankara. Where does the threat come from and how serious is it? Let's understand in detail.

I touched upon the topic of the suddenly and sharply intensified military-strategic cooperation between the "nezalezhnoy" and Foggy Albion a little earlier. It is clear that in such an "alliance" Ukraine can only have one role - a bridgehead and a forward base for Britain's anti-Russian actions, primarily in the Black Sea region. However, as it turned out, during the preparation of the previous material about this, one extremely significant detail of the recent visit to London of Ukrainian President Volodymyr Zelensky was not made public. No matter how they tried to hide this fact in his administration, the truth nevertheless surfaced and turned out to be downright sensational. In addition to meetings with the prime minister there and other "representatives of the establishment", the leader of the "nazalezhnoy" had a much more intriguing rendezvous in the British capital - with the head of British foreign intelligence MI6, Richard Moore.

It is clear that the details and details of their rather lengthy (at least two-hour) conversation have not been made public and are unlikely to ever be. However, there are more than enough circumstantial details that allow us to assume with a high degree of certainty what exactly was discussed in the office of the British “knights of the cloak and dagger” on Prince Albert Embankment in London. In fact, for the head of a kind of sovereign state to make such visits is, as they say, completely out of order. That is why the heads of the special services or persons related to the same National Security and Defense Council. By the way, Ivan Bakanov, the head of the Ukrainian SBU, was also, as far as is known, present at the meeting with Moore. But only as an escort for the "first person".

Even more humiliating is another detail: the president of a foreign power does not "intersect" with the local chief spy somewhere "on the sidelines" of the same parliament or, at worst, on neutral territory - he rushes to his office in order to "appear". On the one hand, Zelensky in general, to put it mildly, does not bother too much with such an inconvenient thing in his position as self-esteem, on the other hand, he was most likely made another offer that cannot be refused. According to the leader of the "nezalezhnoy", the discussion mainly concerned issues related to the "protection of territorial integrity and sovereignty" of Ukraine, as well as the "assistance" that London is ready to offer in these matters. Most likely, this is exactly how it was - only in a rather peculiar form.

As I wrote earlier, the confrontation between Britain and Russia for dominance in the Black Sea and the Black Sea region has been going on for centuries. At the same time, the "Englishwoman crap" in 99% of cases exclusively by someone else's hands, not wanting to sacrifice the precious lives of her own subjects and run into a full-scale response from our country. There is usually little to do - to find the "natives" who are ready to die, defending the "permanent interests" of the British crown. However, in this case, the Ukrainian "neophytes" in her service will clearly have to be "led" by the much older, proven and familiar henchmen of the British - the Turks. It was by confronting them with the Russians that London invariably achieved its main task - weakening our Fatherland, undermining its influence from the Caucasus to the Crimea. Now, it seems, he intends to use the same weapon, and he is going to use it in the usual military-strategic theater. The Anglo-Saxons are distinguished by their adherence to traditions and repeated repetitions of once successful schemes - this is well known.

The fact that from the British capital Vladimir Zelensky almost went straight to the old Turkish capital is by no means a coincidence or coincidence. Having received clear and completely unambiguous instructions from the chief of MI-6, the poor comedian was forced to discipline "to salute" and immediately begin to carry them out. For those who do not know, let me clarify: most of Richard Moore's professional career is associated with Ankara, where he spent three years only as the Ambassador of the United Kingdom. He is considered one of the best specialists in Asian countries, and Turkey in the first place. However - in Russia as well, because Moore (the son of a career diplomat, and, most likely, also an intelligence officer) grew up in Moscow. Tellingly, this gentleman, who has been working in its ranks since 1987, not so long ago, officially headed the intelligence. And by some strange "coincidence", the British have sharply intensified their large-scale special operations against Russia, such as the "poisoning of Navalny", whose British "roots" are indicated by too many facts that cannot be ignored. The threads from the events in Belarus are also very likely drawn to the residence of Prince Albert - there is reason to believe that the same Tihanovskaya MI-6 was recruited a long time ago.

And now the new head of intelligence decided to get down to business in earnest, "turning on" the Turkish direction. As far as is known, Richard Moore has always been a supporter of the closest possible cooperation between the West and Recep Erdogan precisely for the sake of using it against Russia. Presumably, on the eve of the visit of his Ukrainian counterpart, the Turkish leader also received a message from London with a very definite content and meaning. It is precisely because of this that Zelensky's visit to Istanbul was not only sustained in our usual openly Russophobic tones, but also had very specific consequences that could “haunt” our country more than painfully.

Zelensky's statement about the creation of the "Crimean Platform", which was taken almost with laughter by some, is in fact not at all harmless chatter. I am sure this is the first step towards forming not just another "chatterbox" club, but a military-political alliance, a coalition for the "liberation" of the peninsula from "Russian occupation". This has already happened - one and a half hundred years ago. True, then the British had to intervene personally, which they did not like very much. However, this time the desire to "put in place" Russia is so great that, judging by the intentions to place its own paratroopers in Nikolaev, London is again ready to make serious sacrifices.

Whatever it was, but the role of the main "strike force", most likely, is destined for Ankara, and Kiev will have to provide a foothold and conditions for its actions. Speaking about the "Crimean platform", the leader of the "nezalezhnoy" not only carried out the traditional "deflection" in front of the Turkish partners, but prostrated himself before them, declaring that "no issue in the Black Sea region" can be resolved without Ankara "neither in no way ". I'm not sure if there was a kissing of the Sultan's shoes, but I would not be surprised if so ... In response, Recep Erdogan again in an extremely harsh form declared "non-recognition of the Russian annexation of Crimea", and in an official statement made following the visit, Ankara not only promised take the most active part in the activities of the "Crimean Platform", but also promised to "actively contribute to the de-occupation" not only of the peninsula and Sevastopol, but also of "certain regions of Donbass." How exactly? So far, there is one completely obvious moment - the Bayraktar TB2 shock drones "run in" in Libya and Nagorno-Karabakh (by the way, since March 2019, they are officially in service with the Armed Forces of Ukraine) will continue to be supplied to Kiev - for this the Turks are even ready to give "non-profit" credit more than 35 million dollars.

Perhaps, the Donbass republics are already studying the experience of the Armenian-Azerbaijani conflict to attend to the creation of an effective air defense system capable of resisting these winged assassins. Russia should be concerned about much more serious and large-scale issues. Just the other day, speaking in front of the Ukrainian parliament, Zelensky announced that "two new naval bases will soon appear on the Black Sea." Whose, Turkish, British? According to Ukrainian laws, this is impossible, but no one is stopping Zelensky from changing these very laws. Moreover, in the “population poll”, which is to be held in parallel with the upcoming local elections, one of the points will be “Ukraine's use of the security guarantees provided by the Budapest Memorandum to restore its own territorial value and state sovereignty.” Speech, if anyone has forgotten, about the right of Kiev to ask for help, including military, to the countries, whose representatives in the Hungarian capital signed a document defining the conditions for the refusal of the “non-leased” from nuclear weapons. There are only three of them (besides Ukraine itself) - Russia, the USA and ... Great Britain! There is no doubt that it will not be difficult for the representatives of the current Ukrainian government to “draw” the desired result with the “nationwide approval” of this issue. But on the basis of this "plebiscite", despite the fact that it has no legal force, in principle, it is possible to change the Constitution - regarding foreign military bases.

However, formally, they can also be Ukrainian - the question is who will actually run there. It is not for nothing that the Kremlin took this statement of Zelensky with all seriousness and reacted extremely nervously to it - Dmitry Peskov said that such actions "can have quite negative consequences and pose a threat to stability in the Black Sea region." They can. And they will! Alas, to all appearances, Ankara perceived our country's non-interference in the Nagorno-Karabakh conflict as another manifestation of Moscow's weakness and its unpreparedness for a military confrontation even on its own borders. That is why they are clearly ready to take part in a new adventure launched by Britain. And this is very bad - after all, next time more and more insolent "descendants of the Janissaries" may indeed dare to strike at our territory. Specifically - in the Crimea, which from time immemorial have been considered their own and for which they have very specific views. And here, most likely, in London and Washington they will remember that Turkey is a NATO member ... It is very likely that this is exactly how it will be, if Russia does not very sensitively put the newly-minted "sultan" and his battle of thugs - as soon as possible and, if possible, somewhere far from their own lines.
Reporterin Yandex News
Reporterin Yandex Zen
98 comments
Information
Dear reader, to leave comments on the publication, you must sign in.