"Strange gifts from the Kremlin": why Putin began to lift sanctions from Ukraine 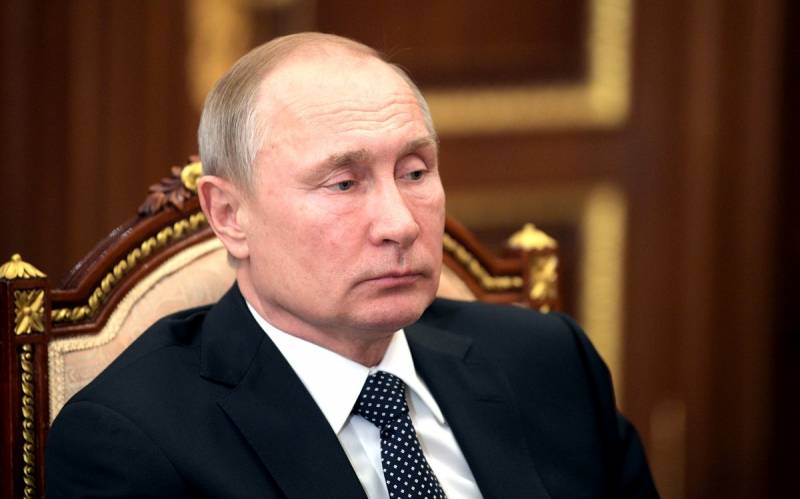 On the eve of the local, or, as they are also called, regional elections, scheduled for October 25, one of the local elections political parties received from the Kremlin a truly royal gift. We are talking about the lifting of sanctions against three fairly large Ukrainian enterprises - the Bratslav company, the Barsky machine-building plant and the Rubezhansky cardboard mill.


Generally speaking, according to the official version, such a generous initiative was made by the Russian Prime Minister Mikhail Mishustin, and Vladimir Putin simply "supported" it. Nevertheless, during the discussion of this issue, it was emphasized that the decision was made following a meeting with Viktor Medvedchuk, who had recently visited Moscow as a guest of our President.

However, in this situation - like an owl about a stump, or a stump over an owl. Everything is somehow uncomfortable ... Why does Russia make such strange "curtseys" to the increasingly hostile Ukraine? Can they bring at least some real benefit to the bilateral relations of our countries, and, most importantly, to influence the situation in the most “non-profit” way in a positive way for Russia? Let's try to deal with these extremely difficult questions.

In his speech to members of the Russian government on the lifting of restrictions, Vladimir Putin noted that this is “only the first step and a gesture of goodwill”, referring to the “deep and high-level cooperation” between our and Ukrainian enterprises, which “brought mutual benefit” and allowed "Keep jobs and pay decent wages to people." Vladimir Vladimirovich, when was that ?! And who broke it all? Certainly not our country. Nevertheless, the head of state expressed his hope for "the restoration of interaction in full format" with Kiev, and Mr. Mishustin even allowed himself to assume that there in response they would feel emotional and "react in a mirror". In other words, they will remove at least some sanctions from Russian companies and goods. Here at this very place I would like to ask just one question: you, gentlemen, national leaders, do you please joke in this way? Or is it simply that the matter with your informing about the true state of affairs in Ukraine is not just badly organized, but extremely bad?

Renat Kuzmin, ex-Deputy Prosecutor General of Ukraine, and now a member of the local parliament from Medvedchuk's “For Life” platform, Renat Kuzmin, gave an exhaustive picture of the real meaning of the grace that has befallen from the Kremlin on some local entrepreneurs. In it, the people's deputy completely openly explained to the potential "electorate" that it was "Medvedchuk who reached an agreement with Russia to lift the sanctions," and no one else. At the same time, Kuzmin called the "unblocked" enterprises "the basis of the Ukrainian industry," which "employed hundreds of thousands of people." In a word, hallelujah to Almighty Medvedchuk and his party!

This statement corresponds to reality, let's say, to a fairly small extent. Regarding the "basis" - generally the most complete nonsense. But not only that! In his fiery speech, openly referring to the genre of the most clumsy pre-election propaganda, Mr. Kuzmin issued a maxim that the enterprises he mentioned (which, by the way, he did not name specifically) were under sanctions "through the fault of the Russian leadership." This is literally. How do you like that ?! That is, our country is “bad” again, but the “good” leader of the Opposition Platform is capable of “taming” it, isn't it? And this is - "pro-Russian politicians" of Ukraine? We humbly thank you ... By the way, even if we assume that the gesture made by the Kremlin could really help the representatives of the more or less loyal political forces in the elections, there are still a number of unpleasant moments. First, of the three factories we are talking about, only one (Rubezhanskiy) is located in an area where the "oppositionists" have at least some chance of success. The other two are in Vinnitsa region. This, of course, is not Bandera's Galicia, but this region was and remains the "patrimony" of Petro Poroshenko and the party he leads. There "Oppoplatform" certainly has nothing to "catch". So what's all the fuss about?

Is it again exclusively about selfish business interests, or am I confusing something? Mr. Medvedchuk really does not hide his pro-Russian views at all - but what is the benefit of them to Russia? I will clarify for those who do not know or have forgotten - this figure was very close to Leonid Kuchma (the very one who was intensively consuming our gas for a pittance, proclaimed the thesis: "Ukraine is not Russia"), but he could not prevent the first "Maidan", after which the country began a rapid slide towards Russophobia at the state level. But if only this ...

Are we going to continue to “turn our left cheek”?

What did Viktor Medvedchuk, who is now the leader of the political council of the Opposition Platform For Life Party and has always had considerable weight both in Ukrainian business and in the local politicians, did for the country in the fateful days of Euromaidan? How specifically did you oppose the coup d'etat taking place there, the outbreak of a civil war? The answer is simple - no way. And it is fair for all Ukrainian politicians who are now, so to speak, in a legal position in their country. All the rest are those who posed a real threat to the Maidan gang, who wanted and could resist it, who were really pro-Russian, were either killed, or behind bars, or had long been forced to leave their homeland. From the current Ukrainian "opposition" with its completely absent social responsibility, they are the same "fighters against the regime" as a nightingale from a boar. The big businessmen that make up its backbone are concerned with only one thing - preserving their own profits, and this is quite natural.

But why should Moscow play along with them? Why would she make the same old mistake in an unknown circle - to rely on people who are completely uninterested in any global changes? Yes, they will support (overtly or secretly) any regime, as long as money "drips"! A hypothetical union with Russia is not something that they do not need - it is mortally dangerous. To "bend over" in front of the Kremlin for your own benefit is as much as you like. But is it really possible to fight the russophobes in power and the hirelings of the West? God forbid! So that my maxims do not look unfounded, I will give quite specific examples - I will simply describe some of the events that took place in Kiev at the very time when the country's “top officials” were making grand gestures in Moscow.

And in Kiev on October 14 (the day turned from an ordinary Orthodox holiday into a real "Bandera's Day", and celebrated at the state level), there were Nazi processions and other no less enticing affairs. As for the Nazis, I’m not fantasizing. The phrase “here we are becoming Nazis from patriots and nationalists” was given by one of the participants in the UPA March, but not to some “Kremlin propagandist”, but to a Radio Liberty correspondent. He, I must say, took these words quite favorably ... Thousands of representatives of various extremist organizations, mostly banned in Russia, such as "Right Sector", "Azov", "Svoboda" and others like them, as well as simply the head of the mournful "patriots" walked around the Ukrainian capital, very loudly promising that "every anti-Ukrainian bastard will get what they want" and that they "will continue to beat the Russian invaders."

The apotheosis of the action was the arrival of "patriots" under Zelensky's office, which they decorated with a cute poster that was surprisingly not Russophobic, but anti-Semitic. Also, “President Vova” (as they call him) was presented with official demands from the nationalist “public”, simple and extremely specific: to adopt a law “On collaborators”, with the help of which it will be possible to deal first with all “pro-Russian” citizens of Ukraine itself, and then with the inhabitants of the "de-occupied" Donbass. Immediately give the appropriate orders to the SBU and the police, so that they, without any pity, as soon as possible "took to the nail" all the aforementioned "collaborators" and simply "traitors" who sympathize with our country. Allow the soldiers of the Armed Forces of Ukraine in the East to use weapons without any restrictions and whenever they please.

There were, by the way, a couple of points directly related to Medvedchuk: the nationalists demand to revoke the license and stop broadcasting of a number of TV channels, including his own "112" (on the air of which, by the way, Renat Kuzmin was ruined), as well as to dismiss the current Prosecutor General Venediktova , who dared to send to the bunk for a while the militants who beat the members of the Patriots for Life organization, which was controlled by him. Do you think that at least one "oppositionist" dared, if not to confront the participants in all this heinous bacchanalia, then at least openly condemn them, as well as slogans and appeals, after reading which all doubts disappear as to whether Ukraine has turned into a Nazi state? It is clear that nothing of the kind was even close. No, perhaps some of them will try to squeak something - but only then and from a safe distance for themselves. These figures are completely incapable of getting in the way of the attack aircraft marching in Kiev. So why did they give up then to support them?

The Kremlin “charity” looks especially unattractive against the background of the actions of the one on whom in Ukraine (unlike Mr. Medvedchuk and his “platform”) at least something really depends. That is, Vladimir Zelensky. Not only that, on November 14, during a speech in front of the audience of the Ivan Bohun Kiev Military Lyceum, this clown again began to talk zealously about "Russian aggression that began in 2014 and continues to this day" ... This no longer surprises anyone, like other Russophobic rhetoric of the current president. Let me remind you of a somewhat more significant point: while in Brussels at the Ukraine-EU summit, Zelensky expressed his full readiness and the most ardent desire to join the new anti-Russian sanctions "for the poisoning of Navalny." There is no doubt - will support without the slightest hesitation and doubt. Here are all the "mirror actions" that Mr. Mishustin is counting on for some reason ...

The only thing worth mentioning in the end is the concern allegedly shown in this case by our leaders regarding “ordinary Ukrainians”. With this too - by. Yes, some of them may not lose their jobs. However, in general, such actions of Moscow, which, in fact, continue to legitimize and "cement" the current state of affairs in Ukraine, do not bode well for those of its residents who are tired of the nationalist dictatorship.
Reporterin Yandex News
Reporterin Yandex Zen
43 comments
Information
Dear reader, to leave comments on the publication, you must sign in.