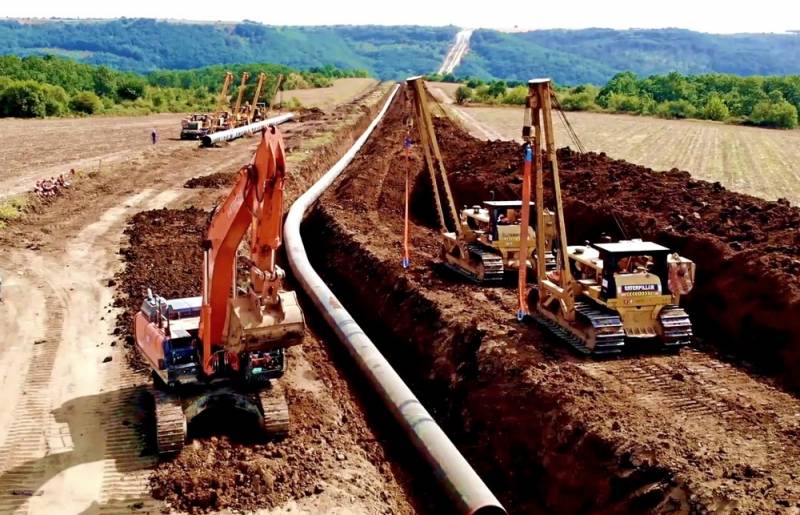 Last December, US President Donald Trump imposed sanctions on Nord Stream 2, and since then, the 93% Russian-German pipeline has been dead weight at the bottom of the Baltic. Every day there is a growing likelihood that the same fate can await the pipeline to Europe in the southern direction, the Turkish Stream.


After the events of 2014 in Kiev, the Kremlin began looking for workarounds for the supply of hydrocarbons around Ukraine. In the south, there were two potential transit countries, Bulgaria and Turkey, and both were “wrong”. Official Sofia quite deliberately in favor of the American gas producers and to the detriment of itself obscured the construction of the South Stream, as a result of which the Turkish Stream appeared. It was planned to build two lines of the pipeline with a total capacity of 31,5 billion cubic meters per year. One for Ankara's own needs, the other for the Southern European market. Here again Bulgaria was to become a transit country.

The geopolitical situation in the region has developed in such a way that Turkey itself has de facto imposed sanctions against "its" string of the Russian gas pipeline, preferring to buy "blue fuel" from its friendly Azerbaijan, as well as LNG from other suppliers. Gazprom unexpectedly found itself in flight. He still had some hopes for a transit line called "Balkan Stream", but it looks like he will be disappointed in this too.

Some time ago, President Vladimir Putin spoke with great irritation about the negligent attitude towards the construction of the Balkan Stream on the part of Bulgaria. Sofia again hinders the construction process under all sorts of pretexts. Thus, neighboring Serbia, which is to become the first recipient of Russian gas, has already built its own section of the pipeline. Bulgaria has already started receiving fuel from Gazprom, but is in no hurry to complete the transit line. Prime Minister Boyko Borisov swears that the deed will be done by the end of the year, but this raises fully justified doubts. There is a strong impression that the fate of Nord Stream 2 is being prepared for Balkan Stream. Judge for yourself.

At firstBulgaria, with the help of the United States, began a hasty program to diversify its gas supplies, 100% of which it now receives from Russia. Until the end of the year, it should receive at least half of these 3 billion cubic meters from other suppliers. The Ministry of Energy of Bulgaria in January 2020 officially announced:

Bulgaria and the USA have a wide field of cooperation in the field of liquefied natural gas (LNG). According to Minister Petkova, by the end of this year, 50% of natural gas consumption in the country will be diversified.
As an alternative to Russian fuel, Azerbaijani gas received through the TANAP pipeline, as well as LNG, will be taken. Sofia also intends to acquire a 20% stake in an LNG terminal in Greece.

Secondly, in mid-July, Washington warned of the threat of new sanctions against the Russian projects Nord Stream 2 and Turkish Stream. Most likely, this will be done after the announcement of the results of the presidential elections in the United States, before the start of the new financial year within the framework of the defense budget.

Thirdly, the contractor for the construction of the "Balkan Stream" is a certain Saudi-Italian consortium Arkad, which has already shown itself not in the best way, delaying the implementation period. If, under the threat of US sanctions, the construction process of Nord Stream 2 was abandoned by a respected Swiss contractor, then what kind of reaction can one expect from this?

Putting it all together, a very pessimistic picture emerges. As of September, 474 kilometers of the required 468 kilometers of the "Balkan Stream" have been laid. As soon as the remaining few percent of the pipeline remains complete, the US will impose new sanctions on the Turkish Stream and Arkad will also quit. Gazprom, as the customer of the project, will have the right to demand a penalty from the contractor, but Bulgartransgaz warned in advance that, according to Bulgarian legislation, all claims would have to be addressed exclusively to the Italian-Saudi consortium. Think for yourself.
Reporterin Yandex News
Reporterin Yandex Zen
6 comments
Information
Dear reader, to leave comments on the publication, you must sign in.