Six geopolitical strikes against Russia: five of them have already been delivered 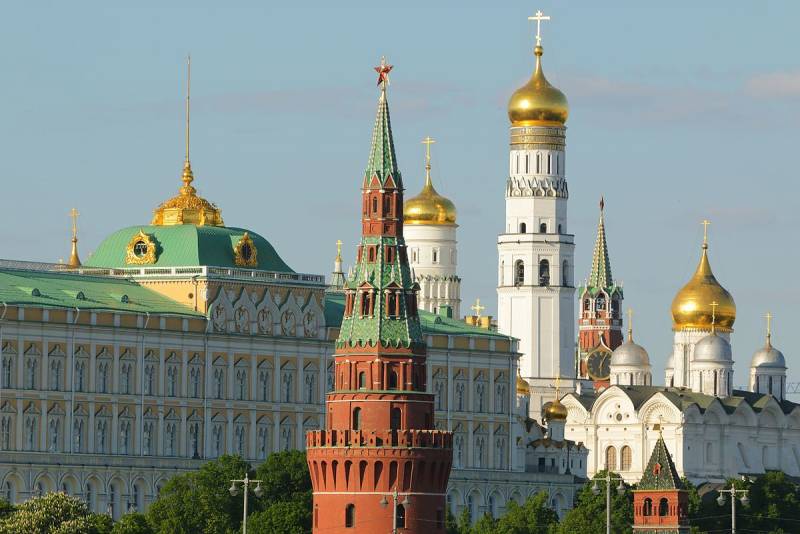 The next (the third in a row in 15 years) "Maidan" in Kyrgyzstan, which caught many observers and experts by surprise, is actually not just a natural, but an absolutely inevitable next "link" in the chain of events aimed at inflicting a comprehensive and a crushing geopolitical defeat. And there is, alas, absolutely no conspiracy at all - all current events are outlined in black and white in the report of the US national security research corporation RAND "Extending Russia: Competing from Advantageous Ground" published back in 2019.


One of the most successful translation options is: "Overstrain Russia: A Strategy of Competition from Superior Positions." It is the step-by-step and very accurate implementation of the strategy proposed by the corporation's analysts to their customers - the Pentagon and the US CIA - that is being carried out literally before our eyes. As the same Americans say - here and now. What will further events lead to if they are allowed to develop within its framework? Absolutely no good for our country ...

Naturally, I will not retell the content of a very voluminous report and present its postulates. Moreover, this work of American analytical thought was at one time quite vividly discussed in the domestic expert community. Some people have taken the liberty of being quite caustic about the fact that the "stupid Americans" and our history do not really know, and in their assessments of modern realities they have managed to make a bunch of "blunders". The advisers also looked for ... Well, how to say. They are stupid, maybe stupid, who would argue. However, to those who, in fact, was the main addressee of the document under discussion (and probably received it in a much more detailed form, supplemented by details that were not widely publicized), it did not seem stupid or divorced from reality. Such a conclusion can be drawn at least from the fact that the measures proposed by RAND to "overstrain" Russia in order to inflict maximum damage on it are carried out by the relevant organizations and structures of the United States with the diligence of schoolchildren.

Judge for yourself: Chapter 4 of the report, entitled “Geopolitical Measures”, contains exactly 6 points, and in this particular order: 1. Granting lethal weapons to Ukraine; 2. Stepping up support for the "rebels" in Syria; 3. Organization of regime change in Belarus; 4. Using the potential to create tensions in the South Caucasus; 5. Decrease in the level of Russian presence and influence in Central Asia; 6. Termination of the presence of Russia in Moldova. These are the brief theses - with appropriate recommendations for each item, of course. And what, tell me, from this list has not been fulfilled? Well, yes, the last point. So the presidential elections in Chisinau on November 1 ...

The level of military support for the "non-profit" from the United States has recently risen to an unprecedented level even in the "hot" 2014-2015 years. There is no doubt that any type of weapon may be in the clutches of warriors from the Armed Forces of Ukraine at any moment. They would have already turned out, if not for the completely justified fear of the "curators" that they would be robbed or spoiled. However, when it is necessary in the "lavas" of the "nezalezhnoy" army, "the right weapon" will appear in the "right" hands. The country has long been controlled not only by the US State Department, but also by the Pentagon a little more than 100%. With regard to Syria, the plan is also being implemented quite successfully. Well, perhaps the Americans have somewhat reduced their own efforts in this area, proceeding from purely pragmatic considerations: why bother if Turkey is coping with the task of creating a constant and ever-increasing headache in this region for Moscow? Moreover, in Libya, in addition, he is trying not out of fear, but conscientiously ... The special operation to "change the regime" in Minsk is in full swing.

Those who believe that the local "Maidan" has been defeated or tamed are naive and overly optimistic. Nothing like this. The corresponding mechanisms have been launched and the confrontation can last for years, and with a very unpredictable ending. Exploded not just by a local conflict, but by a full-scale and bloody war, Nagorno-Karabakh perfectly fits the definition of "using local hotbeds of tension", and the use is undoubtedly to the detriment of Russia, which risks getting serious geopolitical problems in any, in practice, development of this conflict. How much it? Four out of six points? Shall we continue further? Why not…

Everything goes according to plan…

So far, many are inclined to consider the events in Bishkek to be a primitive struggle of local clans, an eternal battle of savages "political elites "of the North and South of the country. In the end, the overthrow of presidents and governments really turned into a national amusement for the Kyrgyz. However, if Molotov cocktails are lit, then somebody needs it. There is no need to wonder who exactly. Domestic politicians, by the way, reacted quite correctly to what was happening, calling the next violent change of power in Kyrgyzstan "an attempt to rock the situation in the country, inspired and coordinated by external forces." Naturally, completely unfriendly to both the Kyrgyz people and, first of all, Russia.

Alas, even the most elementary logic does not allow to consider the political crisis and the escalation of violence in Bishkek as “other people's problems” that have nothing to do with our country and its vital interests. The fact that representatives of both opposing camps (the parties of the current head of state Sooronbai Jeenbekov and ex-president Almazbek Atambayev) are considered seemingly "pro-Russian" politicians does not change the matter at all. Moscow has reasons to worry, and more than weighty. To begin with, Kyrgyzstan is a member of the Collective Security Treaty Organization (CSTO), which is already undergoing a not-so-successful test of strength by the conflict in Nagorno-Karabakh. To completely destroy this structure is the crystal dream of all NATO strategists and not only it. Note that more than serious problems hit three of the six countries in this bloc today. Accident? Coincidence? I don’t think so. Rather, it looks like a global special operation to destroy it.

Considering the Kyrgyz “peculiarities of the national political struggle,” which are now unfolding in front of us in all their “glory”, the matter may come to a much larger-scale conflict, or even, God forbid, to a civil war. At the same time, proceeding from, again, the local flavor inherent in this region, it should be remembered that at the moment of any turmoil in it, the most dangerous and aggressive force - radical Islamists - immediately rears its head. It is not excluded that external players striving to destabilize Central and Central Asia, it is on them that the stake is being made in this particular case. If such a scenario is implemented, no one will be in good luck - neither neighboring Kazakhstan, nor Uzbekistan, with which, by the way, Kyrgyzstan has long-standing and to this day unresolved territorial disputes. Tajikistan will also not be able to stand aside, where, by the way, presidential elections are to be held in the very near future. The favorite (to put it mildly) on such is the current national leader Emomali Rakhmonov, in the field of "political longevity" to Alexander Lukashenko, not only is not inferior, but perhaps even superior to him.

Here's something I have anxious forebodings about this ... The local "opposition" is already trying to muddy the waters there too. One way or another, but if it is not possible to find the fastest and least violent way out of the crisis that has arisen in Kyrgyzstan at the moment, the entire Central Asia can quickly turn into such a blazing madhouse that will give a hundred points ahead of the same Syria, where about the world and peace has long been forgotten in principle. With the only amendment that this will not happen "somewhere out there", but at the very borders of Russia. With all, as they say, the consequences arising from this fact.

The most interesting thing is that surprisingly few measures of a purely military nature were proposed in the report I mentioned above - despite the fact that it was addressed, as already mentioned, primarily to the Pentagon. At the same time, all of them are also carried out rigorously: the maximum redeployment of the US Army Air Force, as well as the US Navy to the borders of Russia and the all-round intensification of their actions on our borders, the intensified deployment of tactical nuclear weapons as close as possible to the alleged points of destruction on Russian territory - these are the actions and are being undertaken today, and quite openly. Nevertheless, the emphasis in the now unprecedented (at least since the USSR) attack on our country is focused on its "overstrain", that is, on creating around it the maximum number of hotbeds of instability, local conflicts and unfriendly states. It is beyond the power of any state to neutralize every single threat that arises as a result, and attempts, excuse the rough calm, to “plug all the holes” at once, will inevitably lead to scattering of attention, dispersion of forces and resources, and excessive waste of resources. Moreover, by focusing on the so-called "post-Soviet space", Russia will inevitably have to curtail all its own efforts on more distant geopolitical "fronts". Mired in attempts to “put out the fire” in Belarus or Nagorno-Karabakh, Moscow will definitely have no time for Venezuela, Iran or Syria.

These are only the most obvious, literally lying on the surface goals of the anti-Russian strategy being implemented now. However, they too, like everything that is being done and planned by the Anglo-Saxons, probably have a "double bottom", under which even more far-reaching intentions are hidden - as if not more vile and dangerous for us than the initial ones. It is unlikely that, having achieved success in “overstraining” our country and “turning it off” from global geopolitical discussions, our eternal enemies will calm down on their laurels and will not try to complete the matter, removing forever the very source of their own problems, as such.

What am I talking about? About the destruction of Russia as a state ... Here recently some readers deigned to joke very caustically about my article about the very specific military preparations of the United States aimed at carrying out an armed aggression against our country. Well, it's your will - laugh, if it's funny. It just looks like the jokes with us are over. Everything is happening very seriously ...
Ctrl Enter
Noticed oshЫbku Highlight text and press. Ctrl + Enter
We are
Defeat or ultimatum: with what Lavrov traveled to Washington
Ten "defeats" of Putin
Reporterin Yandex News
Read Reporterin Google News
16 comments
Information
Dear reader, to leave comments on the publication, you must sign in.