Tikhanovskaya in Berlin. Will Germany make her last mistake? 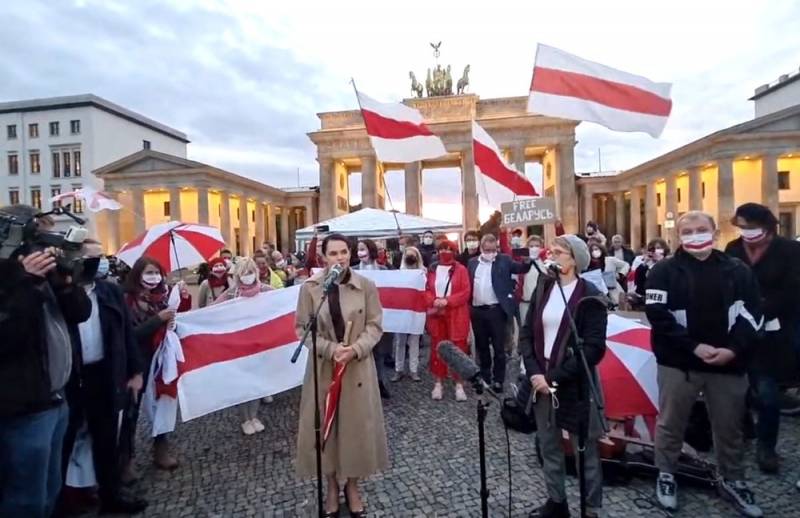 Today, approximately at 16.00 pm Moscow time, a "historic event" is to take place in the German capital: the official meeting of German Chancellor Angela Merkel with a citizen of an unknown state, Svetlana Tikhanovskaya, who proclaimed herself the "de facto elected president" of Belarus and is striving to usurp power in this country. It would seem - why pay attention to such "get-togethers" at all? The joke is solid, and nothing more.


Nevertheless, a lot will depend both on the course of this event itself and on the decisions taken as a result of it by the German leadership. It is she who can become the very notorious "last straw", which will lead to very disastrous consequences. Moreover, no matter how paradoxical it may seem to someone, first of all for Berlin itself.

"The leading figure of the Belarusian opposition ..."

An impostor who arrived in the German capital (sorry, but it is impossible to find another definition for Mrs. Tikhanovskaya - neither by legal norms, nor by conscience), the local "socio-cultural group" RAZAM, literally the day before, hastily created from representatives of the local "Belarusian diaspora" , greeted, not particularly obeying the slogan: “Welcome to Berlin, Mrs. President! " No, what is especially touching in the activities of such structures is their unkillable desire for maximum use in propaganda and agitation (especially visual) of the English language! The fact that at the same time, using their worthy jargon, “mercilessly scorch” or, literally speaking, betray their own organizers and curators with their heads, does not bother anyone. In the world of capital, reporting for every dollar spent is sacred. And the Anglo-Saxons do not like to deal with all sorts of "barbaric dialects". We have to write so that they immediately understand that the money has been worked out conscientiously ...

On the other hand, the show arranged by this clearly “on the knee”, cobbled together by the “support group” allowed Tikhanovskaya to push an emotional speech right at the very Brandenburg Gate. Not every rogue in Europe can boast of such a thing! However, the precocious enthusiasm of the inappropriate English-speaking RAZAM towards the officials of the German government has not yet taken effect. They have enough reason and tact not to proclaim the president as a guest, but to call only “the leading figure of the Belarusian opposition, leading all those residents of the country who protest on the streets of its cities against rigged elections and the use of force against participants in peaceful demonstrations”.


The official representative of Frau Chancellor of Germany Steffen Seibert, who has recently become a rather controversial and even odious figure in the field of German foreign policy... Suffice it to recall that this figure had time to slander in his time about the "poisoning of Navalny" to slightly doubt whether Herr Seibert is working for Berlin or is it for some other capital? By the way, using the visit to the country of Tikhanovskaya as an excuse, this official did not fail to attack Alexander Lukashenko with another attack - this time in connection with the deprivation of the accreditation of representatives of a number of Western media by the Belarusian authorities. According to Seibert, this testifies to “the desire to prevent publicity of the facts of violence and human rights violations in the country”, but “to stop critical coverage of events taking place in it” in this way, he believes, is impossible.

The fact that we are not talking about "critical", but about openly tendentious and biased coverage, which, in fact, represents a threat to the national interests of a country that has every right to admit or not admit certain journalists to work, of course, is not voiced. It is clear that the German media for Tikhanovskaya immediately provided the widest opportunities for self-praise and promotion of their own "ideas." In the forefront was Deutsche Welle, who immediately took a fairly long interview from the “fiery revolutionary”. In it, Tikhanovskaya told the Germans, who were terribly (in her opinion) concerned about Belarusian problems, that “the demonstrations are not blown away” - this is all “hostile propaganda”. Belarusians "come and go" and "will no longer be able to live with Lukashenka." The struggle "for getting rid of the dictatorship" is underway and it will end, the day is clear, "only with victory" ...

Why does Germany need a new Rzeczpospolita?

Here in this place you will have to interrupt - so that it is impossible to upset Svetlana. According to a recent poll of Belarusians, the "revolution" has grown sick of them worse than a bitter radish, and support for the "father" who intends to end this bedlam is not falling, but on the contrary - growing. Alas, questions about the attitude to the situation in the country were asked by its residents not by any “Lukashenka’s agents” or even by “Kremlin propagandists”, but by the sociological service of the Polish TV channel Belsat, financed by the local Foreign Ministry and more than loyal to the “opposition”. There is no doubt that the result of his employees was horrifying: the approval of the president-"dictator" has grown since the beginning of the "protests" by 20%, and the categorical rejection of Tikhanovskaya personally over the same time has exceeded 65%. What is even more unpleasant for the initiators of the survey, the level of support for the idea of ​​integrating Belarus and Russia has exceeded half of the respondents and is growing steadily. But Deutsche Welle, of course, will not write about this ...

But the Germans will be able to find out that "Mrs. Tikhanovskaya" intends to ask Frau Chancellor (who, obviously, already considers her colleague) that Germany take on a key role in organizing "pressure" on Minsk in order to force Lukashenko to sit down at the negotiating table with the leaders of the coup attempt. The result of such, of course, should be new elections, in which Alexander Grigorievich will not participate a priori. Well, and then - "new, free Belarus" on the European model ... Tikhanovskaya, without further ado, convinces the Germans: "we just want to live like you!" Wow applications! Unmercifully flattering the Germans, whose homeland she calls “one of the strongest countries in the world,” which is simply obliged to “support the suffering Belarusian people,” the self-proclaimed “leader” is pushing Berlin onto an extremely dangerous path.

It is no secret that for any country today the issue of relations with Minsk is equally a matter of relations with Moscow. Yes, in fact, no one is trying to make a secret out of this regularity. On the contrary, Russia's support for the country's legitimate president is emphasized in every possible way. On the other hand, Russian-German relations are currently in an unprecedentedly bad state. Speaking just yesterday at a meeting with members of the Association of European Businesses in Russia, Russian Foreign Minister Sergei Lavrov described the situation around the show with "Navalny's poisoning" as "blatant", accusing European (and, above all, German) colleagues of "an unstoppable Russophobic fervor ", Which" finally prevailed over common sense. " From the emotional and clearly coming from the heart of Lavrov's speech, it becomes obvious that Moscow is already ready for anything. To the next unilateral sanctions and restrictions, new waves of accusations and ultimatums. But no one is going to fulfill them, and a strictly proportional response will be given to all demarches. And, by the way, the Russian Foreign Ministry has already quite clearly stated that "in accordance with the allied commitments", all the retaliatory measures of Minsk will be duplicated by our country.

Until the complete collapse, and so has turned into something extremely fragile, almost ghostly, mutual understanding between Moscow and Berlin is literally half a step away. Having openly supported Tikhanovskaya and, even more so, having begun to take some concrete steps aimed at implementing her absolutely outrageous "wishes", Germany runs the risk of collapsing him, at the same time burying Nord Stream 2, as well as all other joint economic projects. It's worth it? Indeed, Frau Merkel should have limited herself to a secret rendezvous with Navalny at the Charite clinic and not get involved with another dark personality from the same "cage".

After all, the matter, by and large, is not only about the gas pipeline. Rather, not so much in the supply of energy resources as in the consequences of the final destruction of cooperation with Moscow that are absolutely unfavorable for Berlin. In the situation with Belarus, it is not without reason that Poland and Lithuania are trying hardest of all, at all levels of European structures available to them, doing everything possible to deepen the crisis and intensify confrontation. Warsaw's interest is understandable - in fact, we are talking about the restoration in one form or another of the Commonwealth, which they count on quite seriously, having enlisted the unconditional support of the United States in this matter. Apparently, Washington has finally “written off” Germany as its main ally in Europe. Moreover, any rise and strengthening of its new satellites, on which the stake is being made today, can occur exclusively at the expense of Germany. I'm not sure that, following the well-known classical form, on its wreckage, but such an option, in principle, is not excluded. Engaging with completely incomprehensible persistence in more than dubious anti-Russian provocations and conflicts that do not affect its own national interests at all, Berlin, in fact, is intensively digging a hole for itself. There they run the risk of being left alone with impudent neighbors from Eastern Europe, who, at the behest of the United States, are today trying to reformat the Old World in a completely new way. And if such changes take place, Germany may no longer dream of any leading role in the EU.

It is impossible to predict what statements about Moscow and Minsk will be made today at the official level after Tikhanovskaya's meeting with Angela Merkel and her speech in the Bundestag. In truth, the mere fact of these contacts and the excitement raised about them in Germany does not suggest positive thoughts. It is very likely that the forces that stubbornly fan the flames of the "Maidan" in Belarus and try to use the events there against our country, will achieve their goal. Nevertheless, there is still hope that healthy German pragmatism will prevail over extremely dubious political ambitions, and Berlin will not make the last mistake.
Reporterin Yandex News
Reporterin Yandex Zen
14 comments
Information
Dear reader, to leave comments on the publication, you must sign in.