Aliyev: There is no time to wait, Karabakh will be returned by force 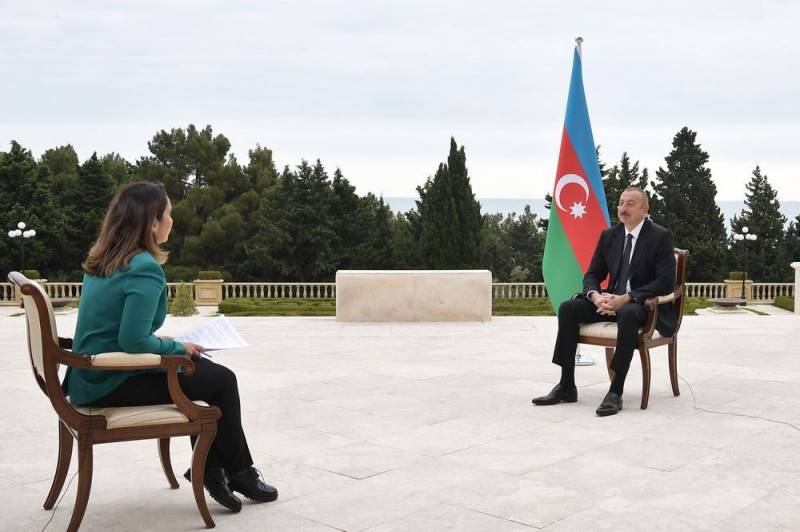 On October 3, 2020, the Azerbaijani Armed Forces continued their offensive in Nagorno-Karabakh, despite calls for a ceasefire. On the same day, Azerbaijani leader Ilham Aliyev announced on his Twitter account the liberation of the village of Madagiz, located in the Martakert region in the north-east of Nagorno-Karabakh. Then he renamed this settlement into the village of Sugovushan, Terter region of Azerbaijan.

It should be noted that the day before, Azerbaijani troops had established control over the dominant heights around Madagiz.

Today the Azerbaijani army has hoisted the flag of Azerbaijan in Madagiz. Madagiz is ours. Karabakh is Azerbaijan!
- wrote Aliev.

Before that, on October 2, 2020, the President of Azerbaijan gave an interview to the Arab TV channel Al-Jazeera from Qatar. The full text of the conversation is available on the official website of the head of state.

According to Aliyev, the meetings with the Armenian leaders turned out to be meaningless and formal. They did not bring any concrete results. Therefore, Baku will fight until Yerevan withdraws its troops from Nagorno-Karabakh.

We wanted to find a way to peace, so we waited for years
- the president specified.

He (Nikol Pashinyan - Prime Minister of Armenia - ed.) Told me that they would not return the territory
- Aliyev explained.

The President of Azerbaijan noted that Yerevan has been deliberately and for many years opposing the proposals of the OSCE Minsk Group on the settlement of this conflict. At the same time, Baku does not need a war, it would like to peacefully return its lands, having agreed, but it will have to return them by force.

What can we talk about after that? We don't have time to wait another 30 years. The conflict must be resolved now
- summed up Aliyev.
Reporterin Yandex News
Reporterin Yandex Zen
11 comments
Information
Dear reader, to leave comments on the publication, you must sign in.