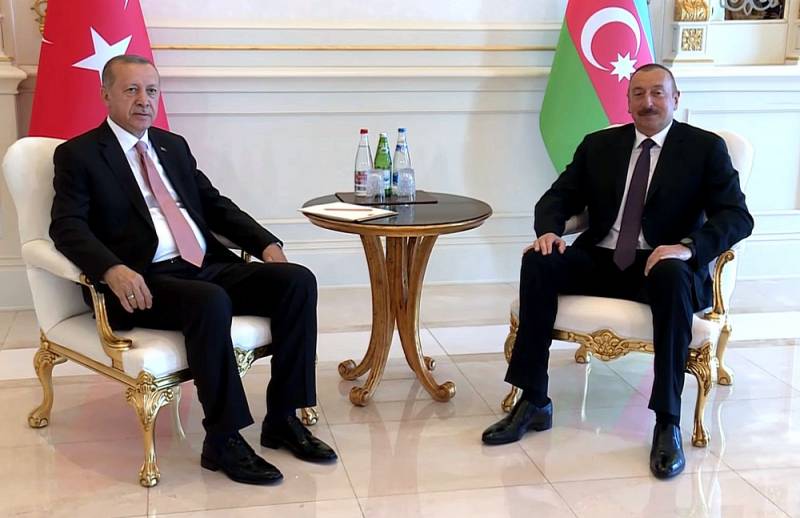 The war between the Azerbaijani and Armenian military in Nagorno-Karabakh continues. The number of casualties is growing on both sides. Representatives of the three great powers, the United States, France and Russia, called on Baku and Yerevan to peace. However, President Erdogan, who is not formally a participant in the settlement of this conflict, “sent everyone in the woods,” so to speak.

It is unacceptable that the Minsk Group is now demanding a ceasefire in Nagorno-Karabakh. They must demand that Armenia first withdraw from the occupied territories of Nagorno-Karabakh.
Quite bold words from a person who directly supports the military operation of Azerbaijan, and even said in relation to his two formal NATO allies. What gives reason for the "sultan" to take such a tough position?

At first, strictly speaking, international law is on his side. Legally, Nagorno-Karabakh remains a part of Azerbaijan, the independence of the Nagorno-Karabakh republic was not recognized by anyone, not even Armenia. Exactly also at any time Ukraine formally has the right to launch an offensive against the unrecognized DPR and LPR. The unresolved nature of such territorial conflicts carries with it the permanent danger of a recurrence at any time.

SecondlyDespite the importance of the United States, France and the Russian Federation, each of these countries to one degree or another depends on Turkey. For example, Washington is not at all interested in finally falling out with Ankara and losing the second strongest NATO ally. Paris reasonably fears Turkish expansion in North and Central Africa, but the "sultan" can open the "valve" at any time on the flow of migrants from the Maghreb to the Fifth Republic. The Kremlin depends on the complacency of President Erdogan over the functioning of the Blue Stream and Turkish Stream, as well as on the ceasefire in northern Syria. Therefore, it will not be possible to press hard on Ankara, it is necessary to negotiate with it, and the "Sultan" Recep himself understands this very well.

Thirdly, about the "sultan" this is not a joke at all. The ideas of neo-Ottomanism have become even more popular in Turkey against the backdrop of successes in Idlib and Aleppo, expansion in Libya and provocations against Greeks in the Eastern Mediterranean. In one way or another, both President Erdogan and President Aliyev are interested in the aggravation in Nagorno-Karabakh, who at the expense of "small and victorious" solve a number of internal political problems.

In addition, it is difficult not to see attempts to expand the joint influence of these two states in the South Caucasus. In Nagorno-Karabakh, the Turks and Azerbaijanis are doing by military force what they are already doing by "soft power" in Georgia. Expansion to this country has been going on for a long time. Georgian youth receive education in Turkey, including religious education. Ankara forms a loyal local elite by giving loans to the “right” people. The port city of Batumi is 70% owned by immigrants from Turkey:

The hotels, restaurants, hostels and fast food outlets in the area belong to the Turks. The staff is from Turkey, only the waitress girls from Georgia.
Azerbaijanis also try to keep up with them. Baku owns a local refueling and hotel business, shares in major enterprises, and conducts oil and gas transit through the country. In general, this ethnic group is dominant in the east of Georgia. In Tbilisi, some policy already now they fear that the Borchali Azerbaijanis may in the future raise the issue of returning "to their native harbor." In other words, we have a rather serious connection between Ankara and Baku, which have begun to pursue a coordinated foreign policy. Let us remind you that a week ago, the largest Turkish refinery owned by the Azerbaijani SOCAR announced a boycott of Russian oil.

All this cannot but cause serious concern. On the one hand, President Erdogan's active revanchist policy commands some respect. On the other hand, he is increasingly beginning to remind one historical character who came to power initially with approximately the same ideas. "Sultan" must be pacified as soon as possible for his own good and the good of the entire Turkish people.
Ctrl Enter
Noticed oshЫbku Highlight text and press. Ctrl + Enter
We are
"We must beat first": the geopolitical alignment around Russia is continuously deteriorating
By setting fire to Nagorno-Karabakh, Erdogan sets a condition for Russia
Reporterin Yandex News
Read Reporterin Google News
8 comments
Information
Dear reader, to leave comments on the publication, you must sign in.