"Revolution of shopkeepers": how Belarusian business decided to boycott Lukashenka 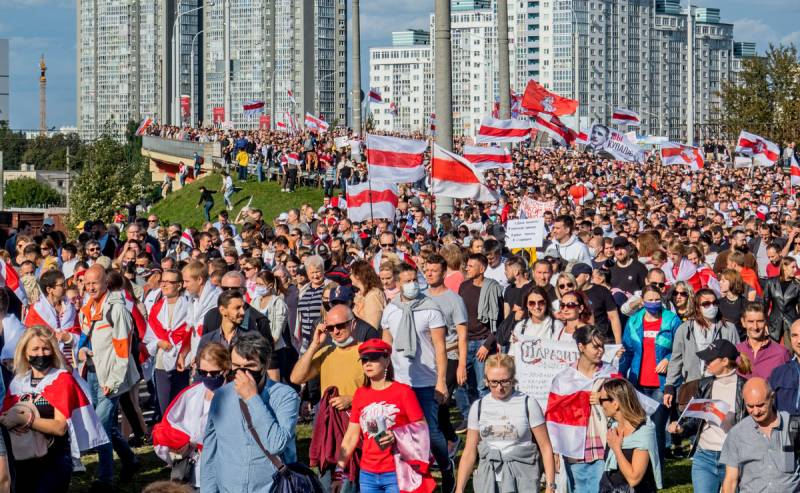 Do you have a red hat and a white sweater? No? Maybe a white baseball cap and a red jersey? Also no? Well, then you won't be seen in Europe. You have nothing to do on the Belarusian Maidan. The opposition is already jumping out of cowards, trying to somehow show that the people are in solidarity against the regime of the bloody dictator. It comes to insanity, they are already carrying out actions of disobedience in the yards and entrances to them. Soon, with the same success, they will escort them to their own apartments. At the same time, the audacity is enough to indicate to the daddy that incomes have fallen in the country. Have you guys tried to return people to their jobs? You look, and incomes will grow.


At first, upon the emergence of the White House, faced with massive protests, Batka registered all the protesters as unemployed and criminals. "There is no work, so, walk, uncle, along the streets and avenues." As part of this, Belarusian TV aired story after story about the participation of former inmates and other marginalized people in the protests. But it is obvious to any more or less sane person that tens of thousands of Protestants in Minsk cannot be only unemployed and convicts. According to official statistics, at the time of the Maidan about 10 thousand unemployed were registered in the Republic of Belarus, even if adjusted for unregistered there were 15 times more - about 150 thousand.However, in the first days of the White Maidan, more than 100 thousand protesters immediately took to the streets of Minsk alone. , which somewhat shaken Bat'kin's thesis about loafers and parasites.

As a result, Lukashenka had to correct his statements. In an interview with Russian journalists, he stated:

It looks like an element of a petty-bourgeois revolution, we have bourgeois people, we have rich people, we have IT specialists, whom I created with these hands, providing them with conditions that no one else can provide better. These new categories live well ... in mansions ... and they wanted power.

They don't go to the Maidan because of a bad life

And here dad cannot be denied justice. Belomaidan once again confirmed the many times proven statement that no one comes out to protest from a bad life. They come out from good, with requirements even better. But the road to hell is paved with good intentions. And the Belarusians rushed along it in a crowd. After all, most of them were born already under Lukashenka and have never seen anything else. They have nothing to compare with. They do not realize that they have everything they have only thanks to the dad, thanks to his resourcefulness and unprincipledness, when, playing on the contradictions between the West and the Russian Federation, he knocked out the financing of the Republic of Belarus from the Russian budget. And now China is also included in this row of external creditors. When they bawl in a crowd: “Father, go away! Tired for 26 years! ”, It would be nice to think about what will happen next?

It would be nice for our clear-eyed regime-rulers to look at the sad experience of Ukraine, which came out 6 years ago behind lace panties and is now swallowing dust in a dirty ditch on the side of a European supermarket. Now Ukrainians live much worse than under the Crime Panda regime, that's all they have achieved. Why don't they go out to the Maidan now? The answer is simple - today there is no time for Maidans, everyone survives as best he can, fleeing alone. But naive Belarusians follow other people's rakes, not noticing them, naively believing that they have their own unique path. Yeah of course! Its unique path into the abyss, where Ukrainians, Libyans, Iraqis, Syrians, Armenians, Kyrgyz, Yugoslavs, who, with the help of the United States, have ruined their countries, some even to the ground (SFRY, Libyan Jamahiriya, Iraq) are already sitting and not buzzing. And even those who have made it to the happy European supermarket are now trampling on in the waiting room, having lost and buried their industry and agriculture on the way to it, at the request of the new owners, looking sadly at the beautiful showcases that you can look at, but you cannot touch them with your hands ... I'm talking about Bulgaria, Romania, Hungary, Czech Republic, Slovakia, Slovenia, Croatia, the Baltic States and even Greece. Do you dream about it, friends?

But friends are not accustomed to think, although each has reached great heights in his field. They think locally, each within its own corridor. After all, those brethren were still gathered there. The Russian Federation began to pay attention to Belarus in the sphere of high of technologies only after the astonishing discovery that not only condensed milk, potatoes and apples, but also MAPS.ME, Masquerade, World of Tanks, EPAM, Viber are the products of the “daddy-collective farmer”. The secret to success was simple - политическая the will of the dictator plus full exemption from taxes, which were replaced by a 1% tax on the proceeds. As a result, Silicon Valley, which gives $ 2,3 billion in export of computer services, appeared in Belarus, with which almost a third of the Fortune Global 200 companies work. The valley, which gives 6,4% of GDP, and all on its own. Another confirmation of the truth that our people are talented, and their creative powers, with the correct organization of the case, are inexhaustible!

But the history of the collapse of the USSR clearly showed that techies - people who are very smart in their fields - turn out to be extremely stupid in matters of social and political. Inhabitants of the campuses, the most consistent supporters of market relations, were the first to join the ranks of the market traders of socks when the real market in all its glory came to Russia. So the Belarusian IT young growth firmly believes that if you get rid of the “last dictator of Europe”, the whole country will heal no worse than Switzerland. However, this is also the fault of Lukashenko himself, who did not work with this public, focusing all his attention on workers, collective farmers, teachers and engineers.

NEP mana on the barricades

As a result, we saw all these friends at Belomaidan. But not alone. Seeing how the Belomaidan, which was not supported by state-owned enterprises (they were stupidly fired for this business, was fading away!), Some private shopkeepers and other petty-bourgeois elements also joined the actions for 1 day (September 16 - National Solidarity Day). All kinds of cafes, bars, shops, printing centers, travel agencies, photo studios and even some IT companies are already official.

In this way, we want to express our disagreement with the violence and support the striking workers of state enterprises who have shown their civil position
- the ZNWR clothing store comments on its decision.

Some companies did not announce about joining the Day of Solidarity, but closed on a sanitary day or stocktaking. The “Eternal Summer” cafe on Kiseleva Street announced a non-working day on Wednesday.

One day of lost profit is not a big deal. It's scary to live in a land of lawlessness and violence
- said in the announcement on the doors of the institution.

At first, we thought that the system would not notice the closure of a small air business on the day, - says the announcement in the account of the boomballoon.by balloon store. - And then we decided that every step from every person is important. After all, this is the only way to run towards the goal: step by step. We are in solidarity with the strikers and decided not to work on September 16.
Also on Wednesday the tattoo studio "DOPEINK" did not work.

Stop work - stop the violence
- they wrote on their Instagram profile.

The PhotoSquat Center also joined the Solidarity Day on September 16. Also among the unemployed - the studio of architecture and design "Good Project". The day of solidarity on September 16 was announced by the cycle magazine "Urbanoid". On this day, his site was not working, a thematic stub was published on it. The dress rental studio "Love Dress Magic" has also joined the Day of Solidarity.

In addition, the action was attended by the handmade gift shop “Mushi Shop”, the home goods store “Misterdom Minsk” (it was noted in the social networks of the store that the store would not work due to the technical work of the cash register equipment), the nail salon “The Kitchen” (closed on a cleaning day), a printing cooperative "Leaflet", a printing house "Druk-S" (closed due to sanitary and preventive measures), a foodybox.by packaging store (closed for revaluation), a tour selection service "BigTrip". Also, in connection with the national strike, all employees of the IT-company Programming Components took a day off on account of vacation.

In this regard, I have only one question: "Guys, who are you all such in general?" A pimple in one place of world capitalism, and still there - to blame the dictators.
Reporterin Yandex News
Reporterin Yandex Zen
54 comments
Information
Dear reader, to leave comments on the publication, you must sign in.