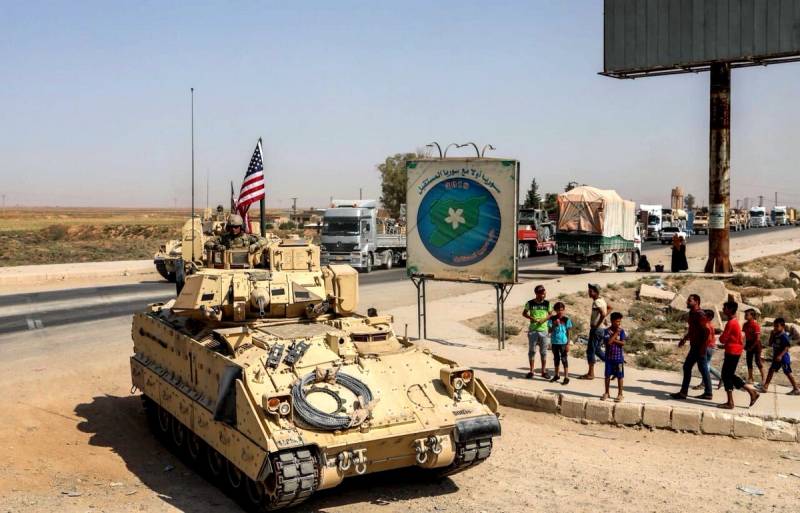 The confrontation between the Russian and American military in Syria is growing. Following the "road wars" the "arms race" begins there. Instead of matching policy de-escalation of tensions, the United States is deploying "bigger armored vehicles" on the Syrian roads.


A few weeks ago in the Syrian province of Deir ez-Zor, there was a serious traffic accident, which we have already discussed in detail. told... US armored vehicles MRAP tried to cut the Russian military convoy. The domestic BTR-82A did not stop and rammed a light armored car of the US Army. As a result, several US military personnel suffered concussions. Most importantly, their injuries were deemed to have been sustained as a result of a "clash".

Soon, the Israeli edition of Israel Defense came out with a publication hinting that Russian soldiers might "pay" like "Wagnerians" in February 2018, trying to take control of the oil field in the province of Deir ez-Zor along Hisham. The general situation in Syria and the Middle East is such that the Americans and Russians do not need to fight directly with each other, no matter how much some Israeli journalists and all-knowing "military experts" would like. However, the pre-election battles in the United States itself may force each of the warring parties to encourage their military in the SAR to aggravate relations with Moscow on the eve of November 3 in order to raise a patriotic intoxication.

Apparently, the Americans are preparing to intensify the "road war". It is reported about the transfer by the Pentagon to Syria of six BMP M2 "Bradley". It is a tracked infantry fighting vehicle with a combat mass of over 20 tons and a crew of three, capable of carrying up to six infantrymen. Armed with "Bradley" 25-mm automatic cannon, machine gun and ATGM "Tou". You can't ram this car so easily. For comparison, the BTR-82A weighs only 16 tons. The American press commented on the dispatch of armored vehicles as follows:

These actions and reinforcements are a clear signal for Russia to adhere to the processes of mutual conflict resolution, and for Russia and other parties to avoid unprofessional, unsafe and provocative actions in northeastern Syria.
That is, no one really hides the fact that next time Russian convoys will cut off the M2 Bradley BMP. Russian contingent in Syria heavy technique does not have, since the participation of the Ministry of Defense in the campaign is mainly limited to strikes by the Russian Aerospace Forces and the Iskander-M OTRK on the positions of the militants. Thus, Moscow faces a difficult choice: either to allow the Americans to illegally clamp down and stop our convoys, or to transfer heavier armored vehicles to the SAR to neutralize the resulting overweight on the roads from the Pentagon.

Most likely, we should expect the An-124 Ruslan flight to Syria, which will transport several Kurganets-25 BMP units to Khmeimim, or even heavier ones, for example, T-90M tanks. The T-14 "Armata" seems to be rolling around in Syria.
Reporterin Yandex News
Reporterin Yandex Zen
15 comments
Information
Dear reader, to leave comments on the publication, you must sign in.