Promising MS-21 should not repeat the mistakes of the "Superjet" 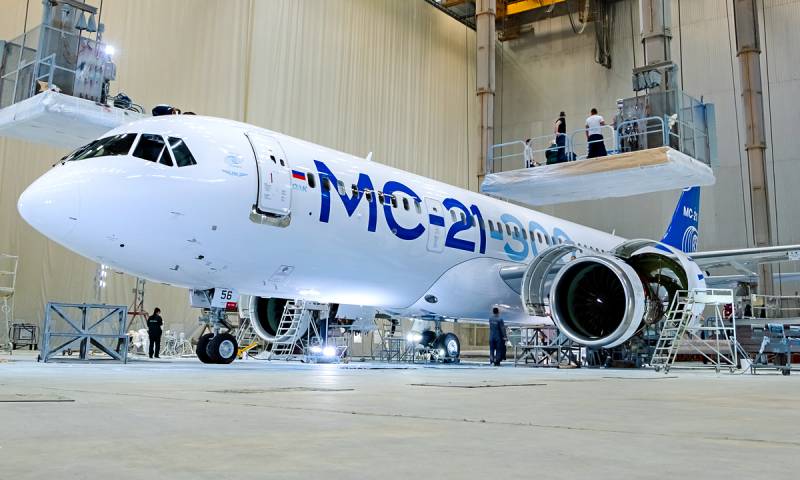 The coronavirus pandemic has dealt a very hard blow to the air transportation industry and the entire global aircraft industry. Its recognized leaders, the American Boeing and the European Airbus, suffered serious losses. The expert community expects a gradual recovery of the air transportation market to pre-crisis levels by 2024-2025. In this regard, the question arises whether the promising domestic MS-21 liner will be able to reach its design capacity by that time and occupy a worthy niche on it?


A medium-haul aircraft manufactured by the Irkut corporation, depending on the modification, will have to carry from 130 to 211 passengers. This automatically makes it a competitor to such popular Western airliners as the Boeing 737 MAX, Airbus A220 and Airbus A320neo, as well as the Chinese Comac C919. The Americans put the bandwagon on the Russian project ahead of time, imposing sanctions on suppliers of composites for its unique "black" wings. Thereby, the dates for the start of commercial production of the MS-21 were significantly shifted to the right. The process of import substitution of composite materials has begun, but it is worth asking now how a promising medium-range aircraft does not step on the same rake as the short-range Superjet.

As you know, the liner, at the customer's option, can be equipped with either the PW1400G engine manufactured by the American company Pratt & Whitney, or the domestic PD-14. The use of an American power plant greatly simplifies the international certification of the aircraft and its subsequent sales in foreign markets. But it would be extremely frivolous to ignore the sanctions factor, so it is very good that work is being carried out on the Russian engine in parallel.

PD-14 is being developed by UEC-Perm Motors. The process is controlled by Deputy Prime Minister Yuri Borisov, who recently personally visited the company. The manufacturer assured him that the first flight of the MC-21 with a domestic power plant will take place by the end of the year. Its certification should be completed by 2022, and the aircraft engine will go into production by 2023. That is, our medium-haul airliner with the domestic PD-14 may be ready for the beginning of a recovery in global demand for new aircraft. Note that work on a much more powerful PD-35, which will be supplied to the domestic Il-96-400M and the joint Russian-Chinese CR929, is in parallel at the Perm Motors.

But it is not enough to produce, it is also necessary to sell, and then reliably service the aircraft. From 2025 Irkut intends to produce over 70 liners per year. So far, firm contracts have been signed for 175 winged aircraft. The figures are decent, although they cannot be compared with the indicators of American and European corporations. At the same time, it is estimated that by 2038 our domestic market will need about 800 medium-haul liners. It is quite obvious that without government support, it will not be easy for a newcomer to push his elbows with Boeing and Airbus, even in Russia.

You don't have to go far for examples. The state-owned Aeroflot has created the highly successful and sought-after low-cost airline Pobeda. Moreover, all the aircraft it operates in this direction are American Boeing 737-800. Pobeda intends to increase the number of imported airliners in the next 8 years from 30 to 170. At the same time, another subsidiary of Aeroflot, Rossiya, will purchase only 50 domestic MS-21 airliners, and 35 more are optional. This is, of course, practical, but unpatriotic, and perhaps even unacceptable for a state-owned company.

Of course, no one says that in a fit of passion it is necessary to simultaneously get rid of all Western-made aircraft. But civil aviation is one of the most high-tech industries in the world, with hundreds of businesses involved in one way or another. Its restoration serves the interests of the development of the national economics and strengthening the national security of Russia. An active protectionist policy in relation to the aircraft industry, which must be supported from factory to sale and subsequent service. Competition in this market is extremely tough, and therefore, without the help of the state, the very promising MS-21 cannot fully take place. The Russian civil aircraft industry still has a long and difficult path ahead, but there is no other way.
Ctrl Enter
Noticed oshЫbku Highlight text and press. Ctrl + Enter
We are
Legend catastrophe: Boeing suffers one defeat after another
Peace enforcement operation. Russia inflicts a preemptive strike on Kiev
Reporterin Yandex News
Read Reporterin Google News
1 comment
Information
Dear reader, to leave comments on the publication, you must sign in.