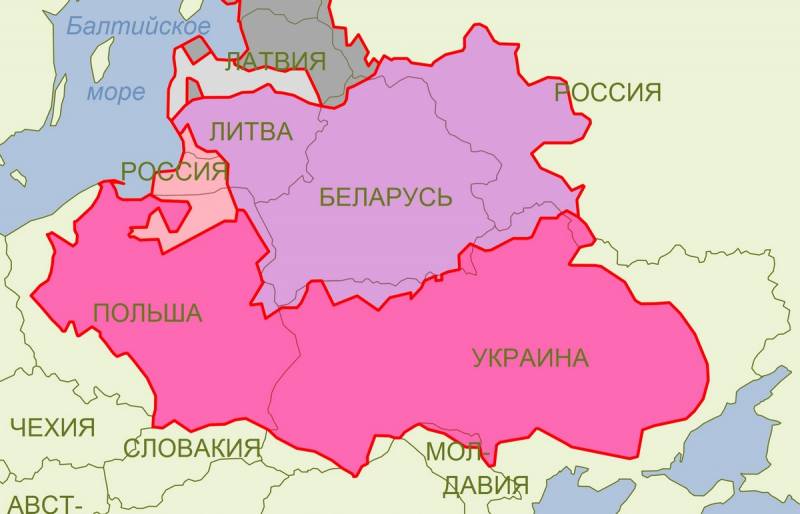 In the feverish activity that Poland, which was more and more in line with Churchill's definition of the "hyena of Europe," and the flock of Baltic "jackals" rubbing around her, have recently developed a quite distinct motive. As you might expect - thoroughly mercantile and even, one might say, selfish.


What exactly is this public trying to achieve by strenuously rocking the situation in Belarus and striving with all its might to do as much harm to our country as possible? Let's try to figure it out - especially since all their aspirations, frankly, lie on the surface.

The "plan of salvation" or a ticket to slavery?

Let me remind you that literally last week the prime ministers of Lithuania and Poland signed a declaration, which contains, no less, but a firm promise “to help the Belarusian people in their aspiration to live in a free and democratic country”. In addition to general declarations about holding "correct" elections, this document also contains a mention of a certain "program of measures aimed at supporting the inhabitants of Belarus." First of all, of course, they are going to help "victims of repression" and other "victims of the regime." However, particular attention is drawn to the desire to "take care" of, as it is written in the declaration, "students, scientists, representatives of culture and art" who "were persecuted because of their views." Well, various "singers by mouth" were pushed into the list, no doubt, exclusively for the assortment. And also due to the fact that this kind of public is extremely convenient for using in various propaganda actions.

The situation with scientists and students is completely different. The neighbors of Minsk really want to get them in as large quantities as possible - after all, it's much easier and more profitable than teaching and "growing" their own! Poland opened its border to all Belarusians without exception who have at least a tourist visa from September 17. Since September 21, Lithuania has been offering the citizens of this country entry according to a certain “simplified procedure”. In fact, it provokes everyone who is allowed to emigrate from the country. Estonia acted most honestly in this case - they openly declared that they are ready to welcome Belarusian IT companies with open arms, but not “ordinary refugees”. There are enough of their parasites ...

Moreover, shortly before the summit of the leaders of the European Union, which is to be held on September 24, Warsaw, like a devil from a snuffbox, jumped out in front of Brussels with an extremely intriguing proposal: to adopt a "plan to get out of the serious crisis that erupted in the immediate vicinity of the European Union." In the introductory part of this document, the Poles, with all their inherent skill of deceitful eloquence, paint truly apocalyptic pictures: it turns out that Belarus is "a state in need of urgent restoration and on the brink of bankruptcy, whose standard of living does not reach the standard of living in Mexico." Anyone who has ever been to this country and knows modern Belarusian realities will appreciate this sentimental passage at its true worth - with Homeric laughter, but it will do for Brussels. Then the most interesting thing begins - cunning gentlemen, as always, offer to arrange their interest for other people's money.

In the opinion of the Poles, the European Union and the IMF should “finance the creation of a fund to stabilize the Belarusian economics", As well as" open their markets for goods and services "from this country and even cancel the" visa entry to the Schengen zone "for its residents! But somewhere we have already heard all this, haven't we? Aren't these the sweetest tales told to the inhabitants of Ukraine when it was rocked for the "Maidan" ?! And how did it all end in reality? Moreover, Warsaw realizes in the most wonderful way that Brussels will by no means agree to the implementation of such projects! The head of European diplomacy, Josep Borrell (the one who recently went wrong, calling Lukashenko "illegitimate Ukrainian president"), in an interview with one of the European publications clearly and unambiguously stated: that with Belarus "one cannot make those mistakes that were made in relation to Ukraine in 2013". As they say, what is more?

What is the Polish trick

In Warsaw, they are far from being fools and they are well aware that the European Union will open neither its own market nor its own borders for Belarus and will not think, come to power there, the Tikhanovskaya gang, adored by Brussels today, or even the entire gang that calls itself the Coordination Council in full force. The whole point is that Poland does not need this at all! In addition to the crowds of Ukrainian guest workers, to get, in addition to the crowds of Ukrainian guest workers, a huge number of Belarusians, much more disciplined and not infected with Bandera's idiot, is the goal of the local political schemers. However, it would be more accurate to say that this is one of the goals. To privatize perfectly working objects of the Belarusian industry and infrastructure is, believe me, a very big jackpot for the lords from Warsaw. Here, you know, not Ukraine with its ruins of factories and rusty gas pipes. As the hero of the famous Soviet film said: “Here is love with interest ...” And, by the way, part of the Polish interest in stirring up the “Maidan” in Minsk is also open territorial claims. The phantom pains of the "East Kres" have not gone away, and lately, it seems, only intensified.

However, the Baltics have the same thoughts. The only difference is that they understand that the jackals will get scraps from the hyena's feast. Well, yes they are small - enough for them. Maybe the overseas "trainer" will throw something else for the diligent execution of commands. Such, for example, as the official statement of the Ministry of Foreign Affairs of Lithuania, which expresses "deep indignation" at the words of the director of the Russian Foreign Intelligence Service, Sergei Naryshkin, who directly pointed out that the United States, using various non-governmental organizations, trained "activists" for the "color revolution »In Minsk on the territories of Lithuania, Poland and Ukraine.

This, you see, is all the "false propaganda" used by the Kremlin in order to discredit the pristine and crystal-clear countries that do not spare their belly for the sake of "promoting democracy." Another example of the same kind is the demarche of the European Parliament member Rasa Yuknevičienė, from the rostrum of this representative body, who declared Russia a “terrorist state” against which “the entire democratic world should unite”, the EU and the USA - above all. A logical continuation of this speech was the call for a "complete stop of Nord Stream 2". Here, the representatives of the Baltic states, again, demonstrate not only complete loyalty to Washington, but also touching unity with Warsaw, which, of course, has its own gesheft in mind here.

Quite recently, the representative of the Polish government, Piotr Müller, issued an ardent appeal to the European countries: it is time to get rid of "the dominance of Russian fuel on their internal energy markets"! To do this, according to Mr. Mueller, is as easy as shelling pears - all you need to do is "exchange the purchase of energy resources from Russia for the import of hydrocarbons through the Baltic Pipe, which involves the supply of fuel from the Norwegian shelf through Denmark to Poland." And Warsaw, with great pleasure, is ready to "provide its infrastructure to reduce energy dependence" of its own EU neighbors. In this case, naturally, several completely "insignificant" points are overlooked. For example, the fact that our gas pipeline is almost ready and, if it were not for the machinations of the United States and their European sings, would have been put into operation long ago. But the Baltic Pipe will be built (if any) no earlier than 2022. And besides, how is Warsaw planning to replace with 5 billion cubic meters (the maximum amount of "blue fuel" that this gas pipeline can supply to the Old World) ten times the amount of Russian gas, which they offer to refuse with indignation?

It should be understood that such "trifles", which are now fanning the "Maidan" in Minsk and the fire of Russophobia in Brussels, are of no interest to the public at all. As in the case of Ukraine, they are trying to break more quickly and more. And to build ... This is no longer for them. The most interesting thing is that the Belarusian “oppositionists”, who are now striving for power, dance to this tune, like the Hameln rats in a well-known legend. Svetlana Tikhanovskaya, just not blowing pink bubbles of emotion, has already declared the “Polish Marshall Plan” wonderful and wonderful for the country that they want to destroy with her hands. At the same time, the lady, who did not have the slightest idea about complex economic matters, honestly admitted that "professionals will negotiate about the conditions and forms of support", in which she does not understand either ear or snout. And she, so - went for a walk for president ...

You can get a complete picture of what kind of “professionals” they will be on the example of a statement made by another member of the notorious “Coordination Council of the Opposition” Pavel Latushko - on the topic, again, of the future “salvation of the Belarusian economy”. This "fiery revolutionary" did not find anything better than to blurt out that he and his colleagues in the "Maidan" have the strongest intention "in case of victory to attract a loan from the European Union in the amount of 4 billion dollars to carry out reforms." That is, the one and a half billion promised by Russian President Vladimir Putin is "economic enslavement", and the same Tikhanovskaya is hysterical, proclaiming that "the people of Belarus will not give them away in any case." And more than three times a large amount from the EU - manna from heaven and "salvation for the country" ?! Or Tikhanovskaya and Latushko also intend to throw Brussels? Well, this is hardly ...

To our great regret, the European Parliament, which adopted a resolution on the official refusal to consider Alexander Lukashenko the president of Belarus, recognizing the crooks from the “Coordination Council” as the “interim government” of this country and “condemning Russia's hybrid interference in the affairs of Minsk”, followed the path he took, in fact, it was pushed by the rabid anti-Russian and anti-Belarusian campaign launched by Warsaw and its Baltic hangers-on. A classic example of how the tail wags the dog in modern European politics. Obviously, it's time to pinch this “tail” firmly - until the whole “dog” is completely enraged.
Reporterin Yandex News
Reporterin Yandex Zen
4 comments
Information
Dear reader, to leave comments on the publication, you must sign in.