The end of the "Slavic brotherhood". Serbia openly betrays Russia 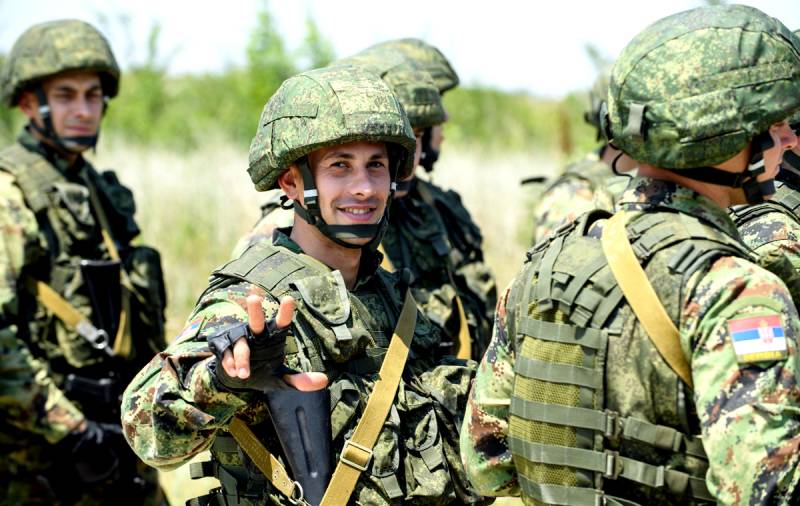 Most recently, Belgrade was terribly offended by a post posted on Facebook by Russian Foreign Ministry spokeswoman Maria Zakharova. Well, the same one - about Vucic in the White House and "Basic Instinct" ... What a storm has risen! The Serbian president himself poured out a burning insult, the minister of defense there, and someone else. Our ambassador to their diplomatic department was summoned by the Serbs - "for an explanation" and there was much more. And what a cry there was in the domestic social networks and forums! Some Russians stood upright like a mountain "for the only fraternal people in Europe." Yeah, brotherly ...


You can argue as much as you like about the form and degree of relaxedness of Zakharova's speech, about how such a presentation of her own opinion is permissible for a high-ranking diplomat. I will not even try to enter into this discussion, since I have not been trained in the intricacies of the appropriate etiquette. But the fact that, hinting at, let's say, the reduced social responsibility of some state leaders, she turned out to be 100% right is a fact. The latest actions of Belgrade and Aleksandr Vucic personally confirm it completely and completely.

Serbian Defense Minister Alexander Vulin, the one who so harshly and uncompromisingly "burned with a verb" our Zakharova, pathetically recalling that Vucic, who she ridiculed, is "the supreme commander of the army, with which the Russian armed forces have the highest and most fruitful cooperation that can be achieved ", Said on the eve that Belgrade will not take any part in the Slavic Brotherhood 2020 exercises planned for the near future, as promised earlier.

At first, the head of the local defense department tried to mumble something about the government's decision, on the basis of which Serbia's military cooperation with "any partners and allies" was suspended for six months. However, later, apparently having plucked up courage, Vulin made a more frank confession: the refusal to maneuver was caused by "terrible and unjustified pressure from the European Union", which "comes to hysteria." That is, the Serbs are for it with all their hearts! Unanimously and popularly ready to stand in one formation with the Slavic brothers! But only if Brussels allows it. Do you know what evil uncles and aunts are sitting there ?! Oooh .... Very scary. According to Vulin, either he personally, or Vucic, or the entire official Belgrade at once, these monsters threatened, if they participate in the Russian-Belarusian exercises, depriving Serbia of the "European future" and "even greater pressure on its policies and our people. " Snide questions creep in: do the Serbs need this "brighter future" in the EU, where they will be pushed around like this? And what pressure can exceed the current one, under which Belgrade, not being an official member of this association, fulfills its commands like a well-trained dog?

And I would also like to ask: what about the "highest cooperation" with Russia and its army, Mr. Vucic? You have some kind of flimsy, cardboard, probably, if it burst into pieces and fell apart after the first tub of water that the "European partners" poured over you. The same cardboard, tinsel, fake, like all your "brotherly attitude" to our country. And by the way, what did they threaten you with so terrifying? New bombing? By sending troops? I’m sure not. Most likely - simply by slowing down the process of Serbia's crawling on its knees into the European Union. And this was enough, as they say, for the eyes to give a damn about all the "brotherly" relations with Moscow. After all, it is perfectly clear to everyone what the maneuvers symbolize, which, even with the cowardly "brothers" from the Balkans, even without them, will still take place in Belarus, now mercilessly attacked by the West. True allies and comrades-in-arms are known and tested in such situations. And Serbia has shown with absolutely complete completeness what its price is.

At the same time, it should be noted that not in all matters Belgrade is so anxious and timid about the shouts from Brussels. For example, the speech of the EU representative for foreign and security policy Peter Stano, who decisively warned Serbia against the move of its embassy to Jerusalem announced by Donald Trump, sounded this Monday. The reason is simple - in this situation, Vucic is following a direct order from Washington, not Moscow. And this is precisely the clearest proof of who he sees as a true ally and patron. Your will, gentlemen, but next to the portrait of this figure it is just right to post not only shots from a frivolous Hollywood film, but from a completely different "movie" - that which is shown exclusively for adults after 21 years in specialized halls.

From Kosovo to Jerusalem - to betray, so to betray ...

Official Belgrade, severely wounded by Zakharova, accused her and Moscow as a whole of not appreciating Aleksandr Vucic at his true worth. Well, after all, gold is a man! He is all neutral - he does not impose anti-Russian sanctions, and the Russian president "waits for an hour and a half." Shouldn't you? A kind, you know, tsatsa ... The main thing, "never asks for a separate chair." On a common bench, probably in front of Vladimir Vladimirovich. I wonder with whom? These are all quotes from a response post on Facebook by Belgrade Foreign Minister Marko Djuric, who ends his fiery philippic with the statement that he "will not allow anyone to attack proud Serbia!"

But I wonder where this very pride went at the moment when Vucic in the White House signed the papers that Donald Trump had palmed off to him, clearly without the right to read them first. When the American president proudly announced to the press about the upcoming move of Serbian diplomats to Jerusalem, the head of “proud Serbia” (this is perfectly visible in the corresponding footage from the press conference) almost fainted and began to frantically sort through the pages from the folder in his hands: “Why did I give it to you ?! " In the dashing 90s, as I remember, drunks were given contracts for the sale of apartments: "Put a squiggle, or we'll unscrew your head!" However, let the Serbian leader account for such diplomatic tricks to his Brussels overseers. For Russia, other moments that were formalized at the same meeting are much more painful. Even if a bilateral agreement between Belgrade and Pristina did not come about as a result of the "get-together" in the Oval Office, the first serious step was taken there towards the recognition of the independence of Kosovo by Serbia. And this is being done not just without consulting Russia, but in spite of its quite unambiguously expressed (and more than once) position.

Moscow has repeatedly declared its complete non-recognition of the "independence" of Pristina. There are a lot of geopolitical reasons for this, which I will not dwell on in this article. Nevertheless, under the close supervision of Donald Trump, Alexander Vucic and the Prime Minister of Kosovo Avdulah Hoti signed a package of documents that actually signify the withdrawal of Belgrade from their previous positions. "Economic cooperation ”, the inclusion of Kosovo in the so-called“ small Schengen ”, joint projects implemented with American money ... Oh yes, I almost forgot - also joining efforts in the“ fight against discrimination against LGBT people ”. This is very important, of course, for Orthodox Serbia in particular. All this is, albeit small at first glance, but in reality very serious "shifts", as one of the domestic "perestroika" used to say. How can you cooperate economically and at the same time “resolutely not recognize”? No way. Most likely, the "irreconcilable struggle for the restoration of territorial integrity" will be gradually curtailed by Belgrade and stopped. Everything else in the signed papers is either verbal lace veiling the main essence, or even sheer nonsense.

Take, for example, the clause on the "one-year moratorium", which Pristina undertakes to take on attempts to achieve her diplomatic recognition, and Belgrade - on opposing such. No sooner had the ink dried on the autographs put by Vucic and Hoti under this declaration, as it became clear - a lie! It turns out that in exchange for moving its "embassy" to Jerusalem, Kosovo automatically receives official recognition from Israel! That's the whole moratorium ... It doesn't matter how the Serbian president sat in front of the American one - it is important that from now on he is ready to zealously demonstrate complete loyalty and obedience to Washington.

At the same time, by the way, the Serbian betrayal was committed not only against Moscow. This cup also did not pass Beijing. In the United States, Vucic and Hoti showed a truly touching unity, pledging to fight together against "unreliable suppliers of telecommunications equipment", in particular, by banning the use of components received from them when creating communication networks of the 5G standard. In whose garden the stone is - understandable even to the most naive. What can you say - to betray, so to betray. True, at least Vucic did not call his Chinese comrades brothers ... The most remarkable thing is that, having finished “pressing on pity” and crying about the cruelty of Brussels, which prevented Belgrade from showing fraternal feelings towards Russia, Alexander Vulin concluded his heartfelt speech with assurances that from now on, the process of "strengthening and re-equipping the Serbian army" will be carried out with unprecedented strength and "persistence". I wonder how exactly? Will Vucic try to beg Putin for Triumphs again? Or will Serbia "suddenly" begin to re-arm itself with the products of American military-industrial corporations very soon? Something suggests that events will develop exactly according to the second option. The alternatives, you know, are somehow not visible. As the proverb says, the head of state got into the habit of walking into the Oval Office, then he and ...

At the beginning of last year, the President of Russia awarded his Serbian counterpart the Order of Alexander Nevsky - "for his great personal contribution to the development of cooperation between countries." Alas, the current actions of Vucic and other representatives of Belgrade make one think about completely different "insignia". About something like the Order of Judas established by Peter the Great, which was then assigned to another representative of the "brotherly people" who went over to the side of the enemies of Russia. Half a step is left until this "award" is fully consistent with the Serbian leadership. Is there anyway?
Ctrl Enter
Noticed oshЫbku Highlight text and press. Ctrl + Enter
We are
Ukraine from the inside: traitors, curators and those who watch from the Kremlin
Ten "defeats" of Putin
Reporterin Yandex News
Read Reporterin Google News
63 comments
Information
Dear reader, to leave comments on the publication, you must sign in.