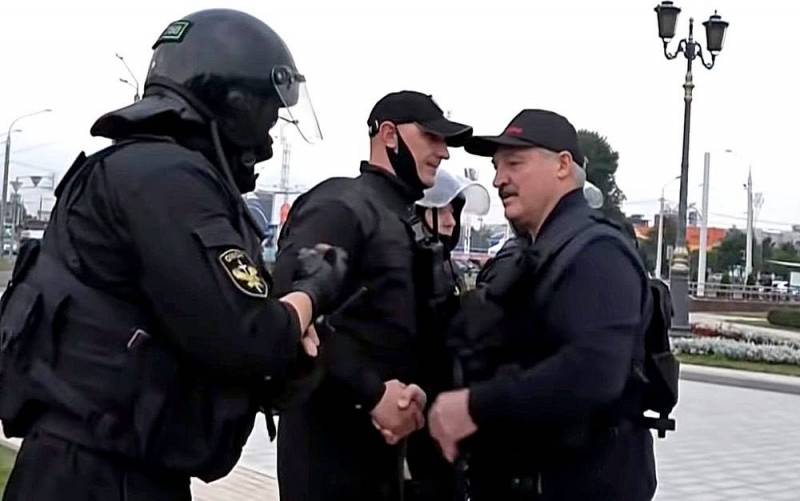 The mass actions that took place on Sunday in Minsk and some other cities of the country made the “world democratic community” once again tense up in anticipation: “What if ?! Well, maybe?" Can not be…


The recent events in Belarus make it all the more obvious that the attempt to organize another “color revolution” there has failed. With each new action of the "opposition" it becomes more and more clear: there will be no "carnival".

To tell the truth, the revelations of those who today are desperately trying to present the actions of the Belarusian “Maidan people” as successful, if they give a complete picture of something, it is only about the degree of perversion of their logic and thinking. However, their performances can be perceived as a wonderful example of an attempt by crooked performers to justify themselves before the "general contractor" for the most mediocre failed work. For example, journalist Frantisek Vyachorka, quite well-known in the crowd of “professional revolutionaries” in Belarus, but working on one of the main “mouthpieces” of the United States, Radio Liberty, published an extensive text on his Facebook page, which is of great interest precisely from this point of view. His extremely pretentious post is titled: "Three reasons why the demonstrators will win." That's right - categorically and without alternative ...

However, what are the reasons? The first of them, according to Vyachorka, is that protests, you see, are "amazingly creative." It's just lovely, what is: “the demonstrators are using Technology and art "and that is their strength! Well, I myself have repeatedly mentioned technologies - and even those organizations in the United States that develop them ... And "art" is, forgive me, what? Antics, breaking and that ugly daub, on the verge of obscenity, which is addressed to the President of Belarus and representatives of law enforcement agencies? Well, you know, there is no dispute about tastes, of course, but I believe that an assessment of such “creativity” should not be given by art critics, but by members of the court hearing cases of hooliganism. Vyachorka categorically disagrees with this and admires the Minsk protests due to the fact that, in his opinion, they are "like a festival" and also "are interesting and fun." Well, how this "fun" ends, we have already seen everything - in 2014 in Ukraine.

However, even an ardent adherent of the "fight against dictatorship" in fact admits with his statements: it is turning more and more into the most ordinary clownery. People who, obviously, have nothing else to keep themselves busy on Sunday, go out to "hang out" with the same, frankly speaking, idlers. “Fun and interesting ...” Vyachorka sees the “exceptionally peaceful nature of the protests” against the background of which “the authorities look stupid with their armored personnel carriers, water cannons and armed people” as the second guarantee of the indispensable victory of the “zmagars”. Which, of course, "gives the protesters a moral advantage" and "limits law enforcement in the use of violence." But this is already a completely obvious distortion. As the chronicle of the Minsk events shows, the current meek behavior of the demonstrators was precisely the consequence of the authorities' demonstration of their readiness to suppress any of their actions that fall under the definition of mass riots in the most harsh way. Otherwise, on the beautiful streets of the Belarusian capital, barricades of rubbish would already appear, tents would stand and tires would burn - the practice of similar events in other countries proves the obviousness of just such a scenario. Peaceful - because they are forced to be such, and there is no need to "la-la".

However, the most lethal, from my point of view, is the third “argument” from Vyachorka - he sees the guarantee of the coming triumph of the Belarusian “revolution” in the fact that… “women are leading the protest and are on its front line, protecting men”. Here already, in my opinion, there is nowhere to go further. Obviously, the mister journalist really imbued with "universal values" to the depths of his soul in the staff of "Radio Liberty", since he is able to produce such passages that are stunning for normal people. "We will win because we are hiding behind women's backs ..." Well, here, perhaps, even there is nothing to comment on.

From retreat to defeat

In conclusion, I will only note that the text I quoted above was posted by Frantisek Vyachorka on Facebook in English. Well, obviously - a report to the curators, and not information for "internal consumption"! For those who are still wandering the streets of Minsk, continuing their senseless games of "revolutionaries", completely different things are published on the Internet. For example, "A Brief Guide to the Elimination of Tihars and Punishers." This, as you might guess, is the Nekhta Telegram channel, which continues to make every effort to ignite the fire of bloody civil confrontation in Belarus. But, to the great happiness of the inhabitants of this country, the matter has not yet advanced beyond cannibalistic appeals. Law enforcers operate quite professionally and clearly have a clear strategy.

Those who came last Sunday to the next “March of Unity” were in for a rather unpleasant surprise - all the squares where they could freely settle were cordoned off in advance by the police and surrounded by barriers, one of which was barbed wire for the first time. Tough, but what to do? In addition, the siloviks' cordons were set up at even farther approaches to the Palace of Independence than a week ago. The poor demonstrators could not even cast angry glances at the "dark citadel of the hated dictator", as they were stopped out of sight. Obviously, Alexander Grigorievich got tired of the spectacular defile with a machine gun and in a bulletproof vest, so he ordered to simply "slow down" the crowd away from his residence. Already tired of ... Seriously, it all looks like the authorities are slowly pushing the protesters out of the streets, depriving any room for maneuver. The number of demonstrators is not particularly decreasing, but it is not growing at all - and for a "revolution" this is tantamount to defeat.

The hopes of “zmagars” that the “siloviki” will waver, get tired, get scared and, ultimately, if they don’t take their side, they will at least begin to evade their official duties to protect law and order. The Minister of Internal Affairs of Belarus Yury Karaev not only called the Belarusian police “the most humane in the world” on television, but also conveyed to the “opposition” an absolutely unambiguous message regarding attempts to “force” actions: “... Let them try, OMON is in place, the Ministry of Internal Affairs is in place, we will not falter. " This is due, without a doubt, by the fact that the authorities do not show the slightest hesitation regarding the assessment of the activities of law enforcement officers - as “representatives of Belarusian human rights defenders, in particular,” dejectedly admit, at present “not a single criminal case has been initiated against police officers and there is no trend to what will be excited. " In light of this, the assertions of the same public that “the last antics of the security forces are now taking place” look, to put it mildly, absolutely unfounded.

By the way, for some toughening of the actions of law enforcement officers (in comparison with the same weekend before last), local “zmagars”, which are obviously used by the West as a traditional “cannon fodder”, should be thanked for this very West. Such drastic measures (according to the Ministry of Internal Affairs, during the mass actions on September 6, "hundreds of people" were detained - not only in Minsk, but also in Grodno, Mogilev, Vitebsk, Baranovichi, Pinsk, Braslav, Shchuchin), most likely, should be considered as a response Alexander Lukashenko to an extremely tough ultimatum, delivered to him by Berlin the day before. Not just "to start negotiations with representatives of the opposition", but also "to immediately announce new presidential elections in the country," under the complete control of the West, of course - rather big appetites, isn't it? Here is "dad" and demonstrated how he sees a "dialogue" with the "Maidan". By the way, this Sunday even his assistant did not deign to come out to them ... There will be no negotiations.

The protest ignored by Lukashenka, harshly and unswervingly pressed by the "siloviki", quite naturally begins to "crumble", lose pressure and retreat to his final defeat. In the West, it seems that they are well aware of this and are beginning to "lay eggs in different baskets", not risking relying only on street protests and their dubious leaders. The fact that at the beginning of this month about the creation of a new political project - the "Together" party, was announced at the headquarters of the former contender for the presidency of Belarus Viktor Babariko, can be considered the best proof of this. Maria Kolesnikova, head of this headquarters, announces "the continuation of the struggle," however, there is a very strong suspicion that the fight for Western grants and political she will need support, first of all, with her own competitors in the person of the self-proclaimed "president" Svetlana Tikhanovskaya. How is Mark Twain doing? "Contenders for the throne are multiplying like rabbits ...", so it seems? However, the more spiders (or spiders) will squabble among themselves in the opposition "bank" - the better for Belarus and its people. By the way, it was on September 6 that this audience finally showed some more features of their own true appearance. Openly anti-Russian slogans again appeared at the protests, such as posters with the words that "the Kremlin has betrayed the Belarusians." What are you talking about, gentlemen "zmagars"? It is precisely the peace and tranquility of tens of millions of inhabitants of our fraternal state, which you are trying to push into the "Maidan" hell, that have been preserved by the resolute position of Russia, ready to come to their aid.

It is not without reason that the leaders of the "opposition" admit that they are afraid of the forthcoming visit of Alexander Lukashenko to Moscow as a verdict, during which, as they think, "some papers will be signed" on deepening the integration of the two countries and further progress in the creation of the Union State. Both the participants and the puppeteers of the Belarusian "Maidan" feel that their time is inexorably running out. "Festival" ends ... Ahead - a heavy hangover and harsh everyday life.
Ctrl Enter
Noticed oshЫbku Highlight text and press. Ctrl + Enter
We are
Ukraine from the inside: traitors, curators and those who watch from the Kremlin
Ten "defeats" of Putin
Reporterin Yandex News
Read Reporterin Google News
33 comments
Information
Dear reader, to leave comments on the publication, you must sign in.