Five lessons to be learned from the events in Minsk 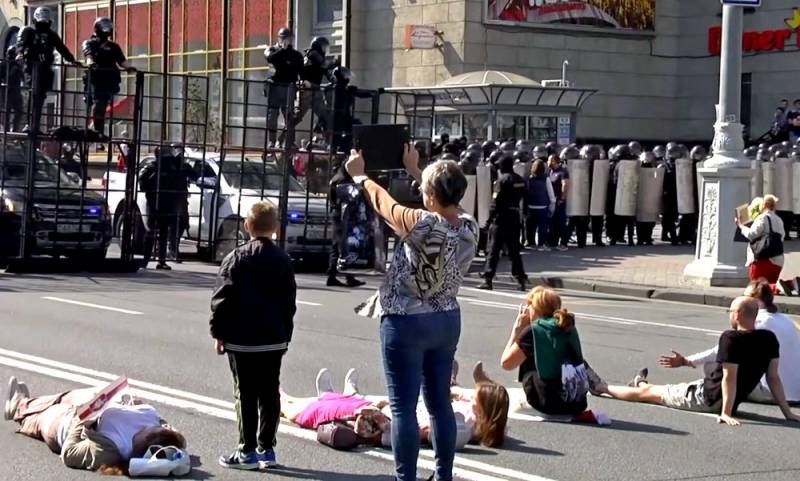 The continuing attempt at a coup d'etat in Belarus is still far from over, but today we can speak with absolute, practically, certainty about its failure. Yes, the country will definitely not be the same as before the start of the protests. Yes, both the people and the authorities there await inevitable changes, a difficult search for a new path.


Nevertheless, the main thing happened - the seemingly win-win scenario of the "color revolution", which has worked many times around the world, "failed" in Minsk. Why did the country, which was almost the standard of stability, suddenly find itself on the edge of the "Maidan" and why does it manage to stay on this edge? Serious lessons must be learned from everything that has happened and is happening in Belarus.

1. There is no immunity from the "Maidan"

The unrest that began in Minsk, and then spread to some other regions of the country, demonstrates in the most convincing way that “color revolutions” are by no means, never anywhere, a riot of the “offended and offended,” hungry and oppressed. Quite the opposite - those who live well enough and, as a result of the “Maidan” demolition of the state, risk losing (and losing, as a rule!) This very, albeit far from luxurious, but quite normal life, join the ranks of the crowds who create them. It comes to the point of absurdity, to situations of the notorious struggle of mice against cheese - to take the same strikes of state enterprises in Belarus, which are alive and working exactly as long as Lukashenka is in power! "Maidans" are absolutely not the phenomenon that a great specialist in this issue, Comrade Lenin, spoke about in his time when describing the signs of a revolutionary situation. They are a product of technologies and a kind of special operations. No more, but no less.

To consider at least one country to be insured against this evil is the worst and most dangerous of delusions. I give my word of honor - about three years ago I had a chance to argue to the point of hoarseness with rather high-ranking officials of the Ministry of Internal Affairs of Belarus (not generals, but from the central apparatus of the ministry). Wonderful people - patriots who adore their country, smart, experienced professionals. And all of them, when the conversation turned to the "Maidans", unanimously repeated: "We cannot have this, because it can never be!" The people are not the same, there are no reasons, there are no protest leaders ... Today I sincerely wish them to withstand the battle with chaos, which began contrary to all expectations and forecasts. And draw the appropriate conclusions.

2. The power of the "Maidana" aches

Whoever said anything about the "excessively harsh actions of the security forces" during the first wave of Belarusian protests, the cynical logic that does not tolerate the subjunctive mood suggests something completely different - if the police behaved differently, most likely, violent riots would break out in character and sacrifice they would have had much more than now. This is not to mention the long-term consequences, like a possible civil war modeled on Ukraine. The forced "toothless" standing of the Ukrainian militia, which only held back the incipient "Maidan", but did not take active offensive actions against it due to the lack of appropriate commands or at least permission "from above", only led to an increase in this cancerous tumor, an increase in the detachments formed right then fighters self-confidence and impunity. The famous "zviryache staying with children under the Christmas tree" was completely legitimate actions, during which they did not beat so much and, by the way, not children at all ... That's just after the howling of the howling in the media controlled by the West and the inspirers of the "Maidan" instantly backed up, turning the police into targets, first for stones and "Molotov cocktails", and then for bullets.

In Belarus, however, the initial reaction to attempts to "shake the situation" was as sharp as possible - today the police practically do not have to use force. The local "Maidan" people understand perfectly well: if they begin to seize administrative buildings, like their Ukrainian colleagues in their time, throw "lighters" at the riot police, or at least burn tires, they will immediately be given the first number so that it will not seem a little. On this field, they have no chances to win - this was more than convincingly shown by the Belarusian militiamen and the military who are ready to stand with them shoulder to shoulder. Well done!

3. No negotiations with the "Maidan"

By the way, the following lesson directly follows from the above - by definition, there can be no "dialogue" with the public trying to arrange a bloody bedlam in their own house with its subsequent destruction, by definition, in the power striving to save this country. Today Ms. Tikhanovskaya and her accomplices, represented by the so-called Coordination Committee, regret the fact that Alexander Lukashenko does not want to communicate with them. Excuse me, but you yourself not so long ago (when it seemed that victory was close) yelled that you would never sit down at the same negotiating table with a "bloody dictator"! A remarkable reaction to such impulses from the Lukashenka administration.

The maximum who condescended to a fleeting conversation with the Maidan people thirsting for communication is the presidential aide Vyacheslav Latyshonok, and the whole dialogue, in principle, can be reduced to a well-known quote from an anecdote: “What do you want? - Talk! - How many of you are there? - Two! “So talk to each other ...” From this we can conclude that the “dad” has clearly learned the Ukrainian lesson - after all, in fact, Viktor Yanukovych signed his own verdict exactly when he began to negotiate with the “opposition leaders”, thereby legitimizing them, as some "political force ”and recognizing their right to decide something and demand something. In fact, investigators should conduct conversations with such figures - yes, under the protocol. It is precisely this approach that Aleksandr Grigorievich demonstrates how he grieves to the extreme the "committee members" who are stubbornly trying to pretend to be some kind of "alternative power". Until the true government confirms this status by entering into communication with the “opposition” on equal terms, it will remain nothing.

4. It all depends on the First

One can treat Alexander Lukashenko in different ways and assess his actions both in relation to Russia and those that he took during the preparation and holding of the last presidential elections. Alas, many of them only demonstrate that no one is immune from mistakes and "excesses". Nevertheless, in the days when Belarus found itself on the brink of a "Maidan" disaster, its leader chose for himself the only correct line of conduct in this situation. Consistency, intransigence, readiness to inspire the defenders of the constitutional order by personal example and participation - all these components, no doubt, played a huge role in the fact that today blood is not flowing on the Belarusian land and tire barricades are not burning. Many began to make fun of the landing of the "father" with a machine gun in his hands from a helicopter, or to be horrified at his "brutality". Nevertheless, shortly before the publication of these pictures on the Internet, there were intensely dispersed reports that "the dictator, who was frightened by the people, fled cowardly."

The appearance in public of the president, ready for battle, pretty much confused the cards of his opponents. However, even more important was the fact that Lukashenka personally approached the “siloviki” with words of encouragement and support. A friendly chorus of special forces and ordinary policemen, without any command, greeted him with shouts: "We are with you to the end!", In fact, became a verdict for the "Maidan". In Ukraine in 2013-2014, Viktor Yanukovych not only did not dare to take up arms, but did not deign to appear at least once at the forefront of the Berkut, which opposed the coup d'etat. With such a "commander-in-chief", the victory of the "Maidan" was inevitable. With Lukashenka and similar fighter leaders, the number does not work.

5. It is not the West that is dangerous, but the fear of it

The events in Belarus with the maximum convincingly demonstrated one more thing: to exert pressure on the authorities of this or that country that they do not want, thereby supporting the next “color revolution” it has inspired, the West can only if this government is afraid of it, if it is from him dependent and vulnerable to him. For Yanukovych, who played into “European integration,” with his accounts in Western banks, a few calls from European embassies and, in particular, a stern shout from the US diplomatic mission were enough to break down and hand over the entire country to the mercy of the putschists. As far as is known, Alexander Lukashenko simply ignored attempts to contact him by those who clearly intended to give the president “good advice” and “valuable instructions”, which in fact were recipes for surrender, even if they were European leaders of the highest levels. He also responds quite correctly to current threats and ridiculous demarches, such as the decision of Lithuania, Latvia and Estonia to declare him personally and another three dozen people from the highest echelons of power in Belarus "persona non grata." What a nightmare! The end of the world, one might say ...

The Belarusian Foreign Ministry responded to these attempts with a statement that “Minsk is less and less worried about the opinion of these countries”, and in addition threatened with retaliatory sanctions. Today, everyone, from the US State Department to the leaders of the European Union, is demanding something from Belarus and its president and threatening them with something. So what? Potatoes stopped giving birth there ?! Are the rivers shallow? Are the forests dry? Nothing of the kind. Neither NATO, nor, especially, its individual members, will ever dare to directly intervene in this country, perfectly aware of the possible consequences. And the sanctions, as the example of the same Russia shows, can be survived. In any case, this is definitely a lesser evil than the "Maidan".

Naturally, one of the decisive factors that predetermined the defeat of the “color revolution” in Belarusian was the clear and unequivocal position of Russia and personally of its President Vladimir Putin, who openly declared his readiness to provide military assistance to the fraternal people - if necessary. The support of our country with all its strength and might is the best "vaccine" against any "Maidan", wherever they try to organize it. The main thing is for Russia to cope when the West will appoint the next "color revolution" on its territory.
Reporterin Yandex News
Reporterin Yandex Zen
11 comments
Information
Dear reader, to leave comments on the publication, you must sign in.