"Venezuelan scenario" for Belarus: Western sanctions will start from BelNPP 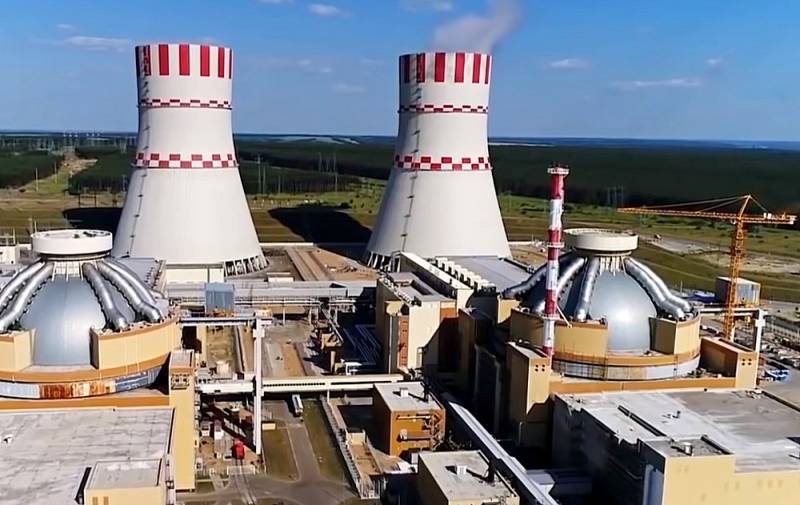 The West is beginning to implement the "Venezuelan scenario" against Belarus, intending to strangle the regime of President Lukashenko economically. The first victim, apparently, will be the joint project of Minsk and Moscow - BelAES.


The Belarusian nuclear power plant is being built with Russian loans and domestic specialists. The launch of its first power unit is scheduled for this fall. When the second starts working, their total capacity will be 2400 MW. BelNPP will reduce the country's dependence on Russian gas imports. It is believed that the Kremlin chose this project instead of the promising Baltic nuclear power plant in the Kaliningrad region, which was supposed to make our western exclave energy-independent in order to economically tie Minsk to itself. Unfortunately, all these plans are now falling apart.

At first, it turned out that the calculations for an increase in electricity consumption in Belarus itself and in its European neighbors were too optimistic. The coronavirus pandemic has only exacerbated the existing negative trend, so the initial plans of President Lukashenko to sell electricity to Eastern Europe have undergone a serious adjustment, and loans will have to be repaid somehow.

SecondlyNeighboring Lithuania was sharply opposed, since the nuclear power plant is being built only fifty kilometers from its capital. Official Vilnius scares both its own citizens and the EU leadership with the new "Chernobyl", despite the fact that even Western experts confirm the safety of the BelNPP. Like us celebrated earlier, only the Maidan in Belarus can stop the construction of the power plant.

And so it came, "Belomaidan". "President" Svetlana Tikhanovskaya settled in Lithuania, the EU countries did not recognize the election of President Lukashenko as legitimate. Since the Kremlin has made it clear by creating a "reserve regiment" that it will not allow a violent overthrow of the authorities in Belarus, the West is starting to put economic pressure on the republic. BelNPP was chosen as the first victim, and the position of neighboring Latvia on this issue is very indicative.

Previously, the official Riga was very pragmatic. Latvia did not follow the lead of Lithuania, which demanded that it refuse to buy Belarusian electricity. Since it is not directly connected by power grids to Belarus, electricity trade has been moved to the border with Russia. Apparently, Riga intended to buy "electrons" from BelNPP through our country, and then resell them to the same Lithuania, earning as an intermediary. Latvia did not particularly look for trouble in relations in Minsk, probably counting on a further aggravation in the Lithuanian direction to receive part of the export flows from there.

Latvia will stop trading in electricity with Belarus if the Belarusian nuclear power plant in Ostrovets is launched. Given the development of events in Belarus, concerns about nuclear safety are only growing.
It is quite significant that during the Ukrainian Maidan for some reason no one in Europe called for the shutdown of four nuclear power plants in Nezalezhnaya. Only about Belarus there were "concerns". In fact, this is a very disturbing signal. Such a radical change in Riga's position may indicate the preparation of Western sanctions against the official Minsk. It will be possible to forget about the sale of electricity abroad, then there will be nothing to give loans to Russia. They will likely begin to be restructured and gradually written off as part of friendly assistance. Belarus will have to build on surplus electricity on its domestic market, which will hit Russian gas exports to Belarus, which are already steadily declining in all directions. The BelNPP itself is at risk of becoming another energy megaproject, built with money from the federal budget of the Russian Federation, which will hardly ever pay off.

As for Belarus, the sanctions against the nuclear power plant can only be the first sign: after them, the export of oil products and potash fertilizers may fall under the restrictions, and this will deprive Minsk of foreign exchange earnings, making it the economy totally dependent on financing from Russia.
Reporterin Yandex News
Reporterin Yandex Zen
7 comments
Information
Dear reader, to leave comments on the publication, you must sign in.