The Kadyrov factor: why did "Putin's foot soldier" scare the United States so much? 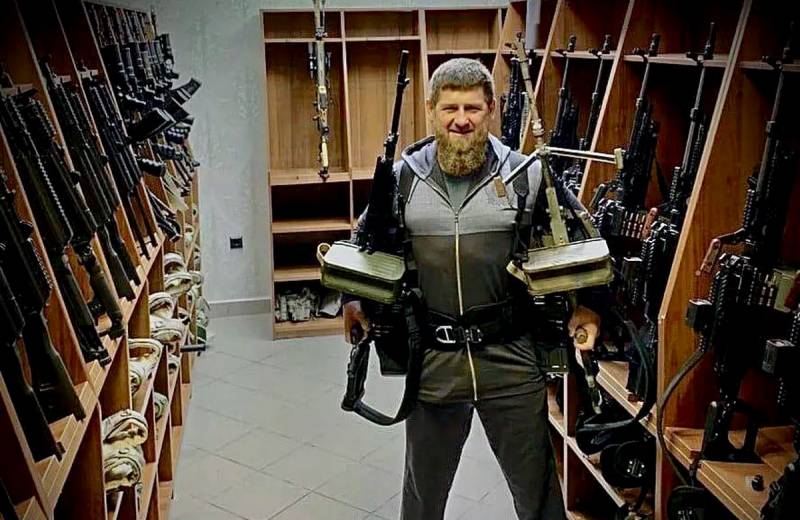 Before our eyes, another round of acute conflict between the two leaders - the head of the Chechen Republic Ramzan Kadyrov and the President of Ukraine Volodymyr Zelensky - is beginning to "unwind". Passions reached such a level that the United States hastened to intervene in the situation, deciding to "a little hurt" the unstoppable Chechen who dared to "run into" their protégé like a man.


The effect, however, was achieved exactly the opposite of what they wanted to achieve. What is happening today between Grozny and Kiev, what does Moscow have to do with this, and why is Washington so alarmed?

To fully understand the essence of what is happening, you and I will have to remember how, in fact, the current story began, which has been going on for more than six years. In 2014, when everything happened, Vova Zelensky was still a perky clown who amused the respectable audience for good money and did not have any political ambitions, and Ramzan Kadyrov, who by that time had gone through fire, water and copper pipes, had been leading Chechnya for almost ten years. It was then that in the "humorous" show "Pure news" led by the future president of Ukraine they decided to joke. It seemed to them - very funny ... "Joking" about the demolition of another monument to Lenin in Ukrainian Kharkov. The footage of a crying Kadyrov was used as a video sequence, on which a very real sound sequence was superimposed - the sobbing of a real Kharkov veteran, through tears choking him, saying: “Lenin was thrown down ... We have lived for 80 years and have not seen this. Fascists, Banderas ... "

According to the "brilliant" idea of ​​the authors of the show, it turned out that these words seemed to be uttered in the frame by Kadyrov. As it turned out a little later, the Chechen leader could not contain his emotions during prayer, and, according to reliable data, it was a commemoration of his father, ex-President of Chechnya Akhmat Kadyrov, who died as a result of the terrorist act on May 9, 2004. One of the few cases when tears in the eyes of even the strongest of men are more than appropriate ... Generally speaking, in order to mock the situation that Zelensky and the team decided to choose as a target for their own jokes, one must be not just an utter cynic, but completely complete scoundrel. Moreover, the result was also utter stupidity - Kadyrov expressed his attitude towards the leader of the world proletariat and his memory quite openly, urging to bury his body, which would be "reasonable and human." But where is Zelensky and where is common sense or at least elementary knowledge of the subject? Incompatible by definition.

With all this, in order to break off such numbers, offending both the religious and filial feelings of a devout Muslim, which Ramzan Kadyrov undoubtedly is, one must be an individual with very pronounced suicidal tendencies. This unscrupulous showman had to be convinced by his own bitter experience, and very soon. Deputy of the State Duma of Russia Shamsail Saraliev unambiguously advised the presumptuous "witty" to "get ready for the ground", recalling that it is "cold and slippery." There were other equally frank warnings. How did Zelensky behave? One thing can be said for sure: not like a man. First of all, he rushed for help to his fellow countryman and namesake, militia general Evdokimov, begging him to help "hush up" the incident. The latter, using his old connections, “connected” the showman with the leadership of the Chechen Interior Ministry, through which he allegedly conveyed his apologies to Kadyrov. At the same time, Vova was afraid to personally confess to Grozny, having passed the responsibility, like a naughty schoolboy.

By a strange coincidence, at about the same time in Kiev, his beloved Range Rover burned down, which frightened Zelensky even more. However, the scandal was somehow managed to extinguish, since the future head of the "nezalezhnoy", a couple of days after the release of the vile program, made an official statement in which he apologized "to everyone who offended, to all Muslims." True, at the same time, in his usual manner, he mercilessly dodged and lied, assuring that he "had no idea" about the content of the dirty video and the fact that the leader of Chechnya appeared in it, he did not edit it even before the broadcast (which he allegedly did not led personally, which is a direct and impudent lie) did not see at all. Anyone who is at least a little familiar with the "kitchen" of television, it is extremely difficult to believe in this. Cowardly lies have always been Zelensky's "hobbyhorse", no matter what position he occupies.

"Uncle Americans, save me, they hurt you!"

Moreover, back in 2014, Zelensky began to assert that he asked for forgiveness “from the Muslim people, and not personally from Kadyrov,” in an attempt to diminish his own shame. He voiced this position in a number of interviews with Ukrainian and other media, including not so long ago - in 2018. And here we are again dealing with an absolutely obvious lie - back in 2019, after the election of a desperately cowardly comedian as president of Ukraine, the press secretary of the head of Chechnya, Alvi Karimov, said that his apology had been accepted in due time. Consequently, such undoubtedly took place. Proof of this is the very fact of Zelensky's existence, if you will. For a long time, Kadyrov did not react to the boastful statements from Kiev, apparently based solely on the principle of the harmfulness of attempts to touch a substance known to everyone ... However, not so long ago, the thunder still struck.

The other day, the leader of Chechnya posted a post in Telegram, in which he recalled to the Ukrainian president not only that long and bad history, but also his subsequent behavior. And how I remembered! Kadyrov directly accuses Zelensky of the fact that he, hiding behind presidential powers, is trying to "pretend to be something, play around, wag, and elevate himself." And he demands either to “confirm the apology” or to be ready to “bear responsibility” for insulting the memory of Ramzan Akhmatovich's father. However, this is only the first part of the message addressed to Zelensky. The second is no less serious and concerns several other things. In it, calling himself “an infantryman of the Great Leader Vladimir Putin,” Ramzan Kadyrov demands the practically impossible from the head of the “nezalezhnoy”.

He speaks of Zelenskiy's “dishonesty and resourcefulness” not only in matters of honor, but also in politics, recalling his election promises to bring peace to Ukraine and Donbass. Kadyrov asks directly: "What prevents you from calling Vladimir Putin and announcing the end of the war?" He calls on the president "nezalezhnoy", in spite of "pride and someone else's evil will," to establish "good-neighborly and correct relations with Great Russia," taking the first step towards meeting. It is precisely these moments, no doubt, that served as the reason for the extremely nervous and harsh reaction of the United States that followed literally immediately. No, announcing the inclusion of Ramzan Kadyrov, as well as three of his relatives in the "black list" of persons who are prohibited from entering American territory, US Secretary of State Mike Pompeo did not even mention the poor and scared Ukrainian president with a word - the standard set was used accusations of "human rights violations" and the like.

However, the fact that Washington's decision to impose new sanctions against the head of the Chechen Republic was made precisely after his demarche in the direction of Kiev can by no means be a coincidence. Moreover, in his post, Kadyrov directly and unequivocally mentions the "transatlantic will", which orders the Ukrainians to "kill the Russian people in Lugansk and Donetsk." You cannot say more specifically, and this directness of the Chechen leader was appreciated in Washington. The only thing that was not foreseen there was the response of Ramzan Akhmatovich - instead of lamenting about the bitterness of the loss of the opportunity to set foot on American soil and lamenting about an unfair insult, he immediately published everything in the same Telegram, a very impressive photo, which depicts with two light machine guns in hands and a radiant smile on his face. The caption is short but meaningful: “Pompeo, we accept the fight! And the promise that "it will be more interesting further." A little later, however, the head of the Chechen Republic invited the head of the State Department to his ancestral village. On kebabs, obviously ... Or - to familiarize yourself with the situation regarding human rights on the spot.

In this situation, the most unpleasant and frightening moment for the United States is the thing that few people today dare to talk about openly. The Chechen path, the Chechen scenario of reconciliation with Russia, in fact, is today the only real path for Ukraine in its current state. The alternative is complete disintegration as a state entity and disappearance from the political map of the world. Only the coming to power in it can save the country - instead of demoniac nationalists, bloodthirsty "Muscovites", or spineless puppets of Washington - leaders who are able not only to put an end to confrontation with Moscow, but also to recognize its seniority, supremacy in mutual relations, and conduct the corresponding policy is not in words, but in deeds. Ramzan Kadyrov is terrible for the Americans not by the ability to hold two PKMs at once or to bring Zelenskiy into fits of hysterical terror with a few words, but by the fact that he is an ideal example of just such a leader. Fighting in the First Chechen war against the federal troops, the Kadyrov family was able to realize the disastrous path of this path for their native land and give Chechnya peace, tranquility, economic revival and the right to live according to their own traditions and customs, without waging a bloody and hopeless war for this. Today the proud son of the Caucasus calls himself "Putin's foot soldier" and, apparently, is proud of this title - this is what he is categorically unacceptable for Washington.

Kadyrov's message to Zelenskiy is not his personal showdown or blood feud, but, in fact, compulsion to peace on behalf of Russia, with which the head of Chechnya inseparably identifies himself. It is for this that the sanctions followed, and not for some mythical "human rights violations" that Americans see everywhere except their own country. A person who has shown that turning an entire country, an entire people, which the West has tried to turn into our mortal and eternal enemies, is a very real thing, can set an example for those Ukrainians who understand that the current path of their homeland leads to the abyss ... It's up to those who will be able to think and bring the right thoughts to life. But this is, of course, not about Zelensky. He'd better just apologize. It will be more whole ...
Reporterin Yandex News
Reporterin Yandex Zen
32 comments
Information
Dear reader, to leave comments on the publication, you must sign in.