Amendments to the Constitution: Will Russia Continue Paying the "Western Bills"? 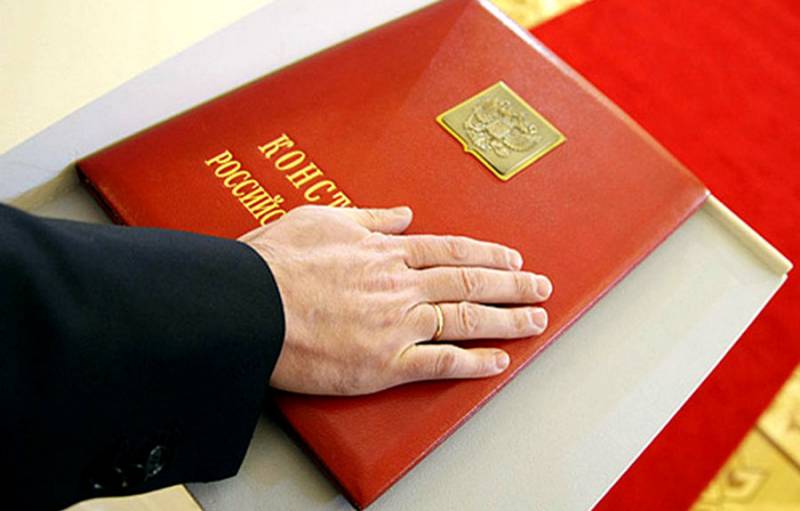 One of the fundamental changes to the basic law of the country, adopted as a result of the nationwide referendum held in Russia, is the amendment to the 79th article of the Constitution, establishing the full and unconditional primacy of our own legislation over any interstate agreements, as well as decisions adopted by international structures and bodies, if they come into conflict with Russia's interests, they are, in essence, interference in its purely internal affairs.


Some people doubted the need for such an amendment. Well, just a few days ago, thanks to the publication of the data of the domestic Accounts Chamber, it became known for certain what the country had to do with the earlier “priority of international law over Russian laws” - with specific amounts spent from the treasury to fulfill the whims of those who believe that Russia should live according to the rules dictated by them. Now the main question is whether this practice will stop, or will this amendment to the Constitution turn out to be just an empty declaration, which will have to be sacrificed for further attempts to "flirt" with the West?

Or God in the Constitution, or punks in the temple

I must say that the legislative change we are talking about initially did not like our Western "teachers" who are trying to "set the right path," by which they mean only their own path, "lost" Russia. In particular, among the members of the Venice Commission of the Council of Europe, who are considered great specialists in the field of constitutional law, it caused downright indignation. Local lawyers directly demanded the new version of Article 79 not to include in the updated basic law, or at least “reformulate”. Obviously - until its true meaning is completely changed. What has so excited and angered EU lawyers? In this constitutional amendment, they saw, first of all, the possibility of Russia not to comply with the decisions of the Strasbourg European Court of Human Rights, immediately taking it as "Russia's refusal to fulfill its obligations under the European Convention on Human Rights." Well, well - that's just about the "wise" decisions of the ECHR and their real cost for our state, and we'll talk.

The report on the results of the audit carried out on the budget execution by the domestic Ministry of Justice, published by the Accounts Chamber of Russia, clearly states that in 2019, this department paid 1.1 billion rubles in accordance with more than 1.2 thousand decisions taken in Strasbourg. Moreover, more than 850 million rubles in execution of the ECHR verdicts were not paid as of the beginning of this year due to “too late receipt of documents”. Presumably, they will pay off. Let's not even try to discuss the issue of what the state could usefully spend such huge sums on - I am sure that each of you will have a lot of options. Let's talk better about who and for what exactly received them in reality.

We will not dwell in detail on payments made last year, compensation by Strasbourg to relatives of the victims of the terrorist attack in Beslan, and even more than 30 thousand euros received by the wife and mother of Sergei Magnitsky, who died in jail. Let us dwell on the most, perhaps, illustrative example - our country's diligent implementation of the ECtHR decision on the payment of 37 thousand euros to the members of the scandalous "group" Pussy Riot, who in 2012 staged a blasphemous and sacrilegious "punk prayer" in the Cathedral of Christ the Savior. European judges recognized the poor people as having endured horrific torment and hardship, and, most importantly, completely unjustly condemned for their vile, offending feelings of not only Orthodox believers, but also every normal person, trick. And their paddy wagons were cramped, and the dog was too scary during the trial, and the videos cannot be considered extremist in any way, and in general, for an “attempt at self-expression” they had to be praised, stroked on balaclavas, and it is desirable to also reward in some way ...

All this, excuse me, nonsense, unconditionally supported by six out of seven members of the court (only the representative of Spain, Maria Elosegi, was opposed, apparently, Catholic education), formed the basis not only for the moral justification of presumptuous girls, whose "creative path" is a continuous series organizing in public vile obscenities with political overtones, but also demanding a very solid material compensation for them! For the received, you see, "moral and psychological damage" ... And they paid, how cute! In the interviews handed out later, the self-satisfied “prisoners of conscience” openly admitted that at least part of the funds received were used to continue and expand their own activities, including in the media space. To finance, in fact, anti-state activities from state funds? This, sorry, already smacks of masochism. At this point, either the mention of God, also included in the Russian Constitution, must be removed, or it must be done so that no "punks" and other evil spirits even have a thought about the desecration of the saint.

ECHR as a weapon of destruction of Russia

As you know, every illegal act that is not followed by real punishment generates a sense of impunity. And not only among those who committed it - in our age of total awareness of everyone about everything, thus a general illusion of permissiveness is generated, pushing to active actions those who do not care about the Law, conscience, and even more so, someone's beliefs and traditions ... Best of all, he said about this, referring to all the same "creative" punks, the Patriarch of Moscow and All Russia Kirill, who emphasized the inadmissibility of the mockery of shrines to be perceived by society, "as a kind of valor, as a kind of correct expression of political protest, as a kind of appropriate action or as a harmless joke. " In Ukraine, too, everything started with cooking eggs on the Eternal Flame - exclusively "as a sign of political protest" and for self-expression. Everyone knows how it ended. But it is precisely on the guard of such things (as well as "rights", and, for the most part, not ordinary Russians who have really suffered from the representatives of the authorities, but all sorts of sectarians, perverts and similar subjects, who are declared "prisoners of conscience"), is the ECHR, and in fact, the entire "collective West". However, not only - after all, the matter here, apparently, is much more serious.

For example, a gang of thieves from the ever-memorable YUKOS from the ever-memorable YUKOS found a lively participation and support from his judges, the retrospective collection of taxes hidden by them from the state and the imposition of fines for such frauds was declared "illegal" in Strasbourg. According to this verdict, Russia was supposed to give Mr. Khodorkovsky and the company almost two billion euros! This, by the way, is more than 95% of all the sums that harsh European judges have managed to "hang" on our country for as long as 20 years - from 1998 to 2018.

Cheered up, the businessmen from YUKOS rushed to storm the same court with a new lawsuit, in which they demanded that all the charges against them be declared indiscriminate, explaining their persecution for very specific economic crimes "political repressions ”, and again proclaiming themselves“ prisoners of conscience ”. This is despite the fact that all the main persons involved have long been pardoned and are at large. This escapade, however, suffered a fiasco, but there is no guarantee that the "second YUKOS case against Russia" will not emerge on a new one "at the right time." Moreover, no one is going to pay a dime even on the first decision. However, precedents are being created, and the further, the more incomprehensible and more unpleasant they are. Consider, for example, the decision of the ECHR of 2018 in the case "Volokitin v. Russia".

According to him, the state was obliged to fork out for solid payments (calculated mainly in thousands of euros) to a considerable number of applicants who believe that our country, as the successor to the USSR, is obliged to pay off (and even taking into account all conceivable and inconceivable interest) issued in the Soviet Union in 1982 premium bonds of the government internal winning loan. The question, no doubt, is extremely painful - we all lost something in the crazy and boundless years of "perestroika" and the unimaginable mess that followed. Deposits in savings books that have been accumulating all our lives, other savings that have depreciated to zero, work, our own place in life ... But what can I say, if we all lost our homeland then ?! On the one hand, the desire of fellow citizens to return at least something seems natural and fair. But on the other hand ... Should payments on Soviet securities be made only to them? And why?! Now let's imagine for a second that our government will begin to compensate everything and everyone - as expected, with an inflation rate and so on. What will happen with the financial system of Russia, with its economy in this case?

Hyperinflation, the dollar is not 100 rubles, but 100 thousand, "bursting" banks, total collapse and chaos - all this is absolutely inevitable. In the illusory pursuit of "justice" and in an attempt to compensate the citizens for the "dashing 90s", the state will be thrown back almost instantly in these very 90s. Did they understand this in Strasbourg, or did they deliberately create yet another extremely dangerous precedent fraught with a new explosion of social discontent and destabilization in society? Something suggests that the gentlemen from the ECHR were aware and are still aware of the consequences of their actions in the most remarkable way. They simply act in relation to Russia according to the principle: "the worse, the better." In Strasbourg, over and over again, with great relish, they recall the "primacy" of Russia in the number of lawsuits filed in the local court against it (about a quarter of the total in the last couple of years), thereby trying to emphasize certain "problems with the observance of human rights and freedoms" in our country. Or maybe it's something completely different? For example, in attempts to use this European structure as an instrument of support for all destructive forces in Russia and, therefore, as an instrument of its weakening and destruction?

It is difficult to disagree with the proposal recently made by the speaker of the State Duma of Russia Vyacheslav Volodin regarding the urgent need that arose after the adoption of amendments to the basic law "to revise all international agreements concluded by our country for compliance with its Constitution." And also - official notification of all international organizations without exception about the domination of domestic legislation over their decisions. The head of the domestic parliament considers these actions "to protect the sovereignty of Russia and prevent external interference in its affairs." To this we can only add that such a policy is dictated simply by elementary logic - why, otherwise, would the Constitution be changed, if we are further ready to follow someone else's will?
Reporterin Yandex News
Reporterin Yandex Zen
24 comments
Information
Dear reader, to leave comments on the publication, you must sign in.