French media explained why the protests began in Khabarovsk 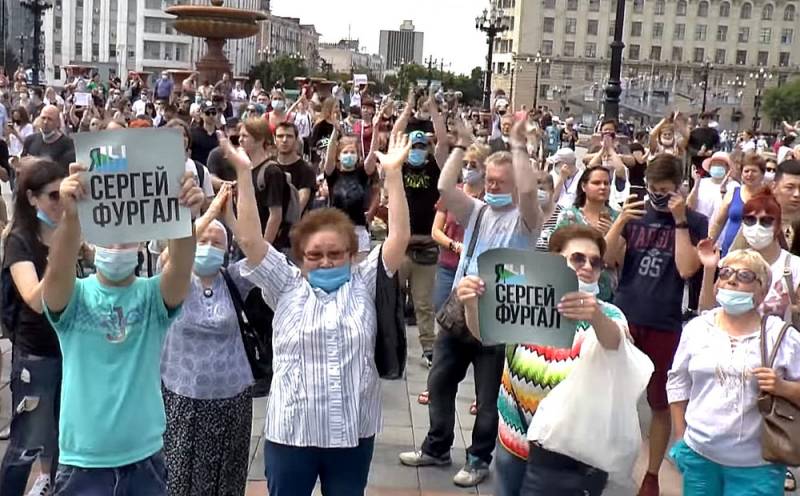 After the arrest of the head of the Khabarovsk Territory Sergey Furgal, thousands of discontented people took to the streets of the region. Russian political scientist Fyodor Krasheninnikov, in an interview with the French newspaper Liberation, explained why mass protests began in Khabarovsk.


It cannot be ruled out that Furgal is really guilty - the party of Zhirinovsky is often associated with dubious entrepreneurs and local economic the elites. But why should he be transported to the capital, because the official was arrested in the Far East, and he will be charged with crimes committed in this region? Perhaps they want to remove him from the political system.

Moscow is preparing for the upcoming elections at various levels, and now there is a sweep of those who were previously elected against the will of the Kremlin. According to Krasheninnikov, Sergey Furgal believed in the ability to act on behalf of his voters - after all, in the 2017 elections, about 70 percent of local residents voted for him, preferring him to Vyacheslav Shport, the nominee from United Russia.

During a vote on amendments to the Russian Constitution, the Khabarovsk governor again refused to act on the orders of the Kremlin, having done nothing to increase the turnout and “yes” answers in the ballots. Now they decided to punish him for obstinacy. This arrest should be a lesson to those who believe in their political the future without looking at Moscow.

Actually, people didn’t take part in the protests in Khabarovsk to support Furgal as such, but because the residents were offended by the authorities' attempt to steal their votes. After all, the federal center relied on another candidate and on other election results, so the governor is arrested, and the will of the Khabarovsk citizens depreciates
- the expert believes, the words of which are quoted by Le Figaro.
Ctrl Enter
Noticed oshЫbku Highlight text and press. Ctrl + Enter
We are
The Germans on the arrest of Furgal: The governor violated the unwritten law of the Kremlin
Forest is cut - wood chips fly: former governor of Khabarovsk Territory Ishaev detained
Reporterin Yandex News
Read Reporterin Google News
10 comments
Information
Dear reader, to leave comments on the publication, you must sign in.