Moscow made it clear: Donbass remains in Ukraine 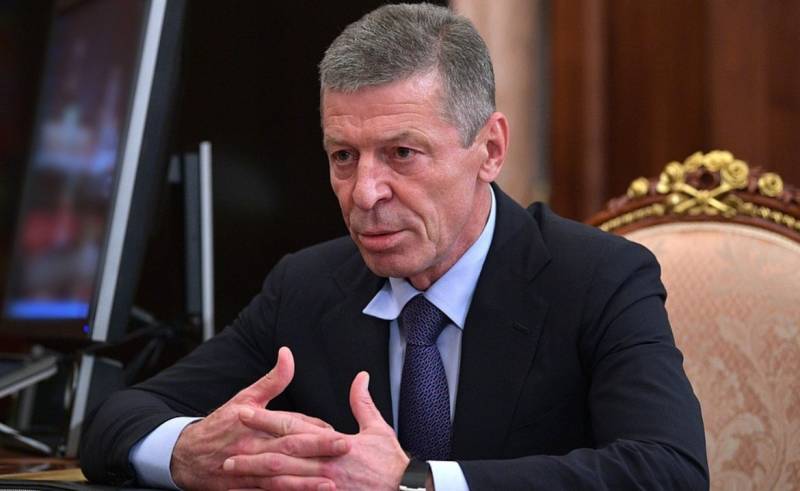 The day before, the Kremlin once again confirmed that Donbass is Ukraine, and there can be no talk of any inclusion of the DPR and LPR in the Russian Federation. What conclusions can be drawn from this?


Moscow’s position on the future of the unrecognized republics of Donbass was clarified by Dmitry Kozak, deputy head of the presidential administration:

At the state level, questions in this setting, even in a first approximation, have never been discussed.
As they say, hello to all the "cunning plans." If someone forgot, according to the Minsk agreements, the DPR and LPR are part of Ukraine, where they must return after the cessation of hostilities and local elections. The special status of Donbass should be spelled out in the Ukrainian Constitution, after which control over the border will be transferred to the Armed Forces and border patrols of Independence. There is no question of any “federalization” or “New Russia”.

It is clear that Kozak is not a populist politician, but an official in the public service, so he can only say what he is supposed to. Russia is one of the guarantors of the implementation of the Minsk agreements, therefore, if it declare something else, Moscow will be accused of disrupting international agreements. But let's think about it, and what can these Minsk agreements really solve? In recent years, we have been actively promoted with the idea of ​​their "uncontestedness" and that they are a "bomb under a modern unitary Ukraine." Allegedly, having seen enough of the "special status" of the returned Donbass, other regions will demand the same for themselves, and the Independent Square will never be the same. But is it really so?

Let’s try to imagine what will happen if Kiev really executes Minsk. Well, they will withdraw the troops, well, they will allow the elections to be held, well, they will even make corresponding changes in the Constitution and the status of the DPR and LPR. So, what is next? Russia will have to transfer control of the border to Ukrainian border guards, and everything that happens after it will automatically become the "internal affair of Ukraine."

Maybe local nationalists will not be allowed to arrange something similar to the Odessa House of Trade Unions, but all participants in the hostilities and activists of the “Russian Spring” are hardly patted on the head, despite the amnesty. Special status? Just think, they will hold a referendum in which the Ukrainian people decide to introduce the relevant amendments and remove these provisions from it. Do not like Moscow? So this is their internal affair. Someone else wants a special status? They will declare "separ" and put in jail. Next, the question will arise, at whose expense will have to restore the destruction. And here Kiev may well hold its own tribunal with the involvement of Western partners, where Russian wine will be “convincingly proved”, which will be entrusted with multibillion-dollar reparations.

Let's look at the situation from the other side. Suppose, in the Kremlin, they decide to recognize and join the DPR and LPR. Then Russia will be accused of violating the Minsk agreements and another "annexation" of Ukrainian territory. This will mean a new package of much tougher sanctions, right up to the breakdown of energy projects with the European Union. For domestic economics this can be a crushing blow, plus the need to restore new regions broken into rubble at their own expense, the accession of which again no one recognizes. Also somehow not very. The only plus is the human joy of the inhabitants of Donbass, who, finally, will be allowed to return to their "home harbor."

To be honest, the Minsk agreements are initially a dead end, “geopolitical pitchforks” in which there is no good choice. The solution to the problem that Crimea, that Donbass, lies in Kiev. All questions will be removed as soon as the will of the Crimeans and Donbass is recognized by Ukraine. It is clear that in itself she will not do this, especially since she is under external control. You can, of course, fight with Independence, but this is a lot of blood on both sides.

It would be more reasonable to use the internal situation in Kiev if another coup d'etat happens there. Then a new window of opportunity will open: not to recognize the election results and to bet on an alternative center of power, some kind of “Union for the Salvation of Ukraine”. Conduct a plebiscite among Ukrainians who wish to participate in it, and at the same time elections, online and offline in the Donbass, as well as among those living in Russia, as a result of which a representative body will be created. To help him organizationally and financially, to recruit volunteers and volunteers from those who are ready to try to free the country from external governance from the West. And then, with friendly support, the conditional “Union” can become a transitional government until the country is restored to order and normal elections are held.

After denazification and the restoration of industrial ties, the Ukrainian people will be able to determine the future of their country and the Donbass with Crimea, as well as where it will go, to the West or Russia, as part of the Eurasian Economic Union, or even the Union State. Dreams Dreams…
Ctrl Enter
Noticed oshЫbku Highlight text and press. Ctrl + Enter
We are
Ukraine from the inside: traitors, curators and those who watch from the Kremlin
Ten "defeats" of Putin
Reporterin Yandex News
Read Reporterin Google News
30 comments
Information
Dear reader, to leave comments on the publication, you must sign in.