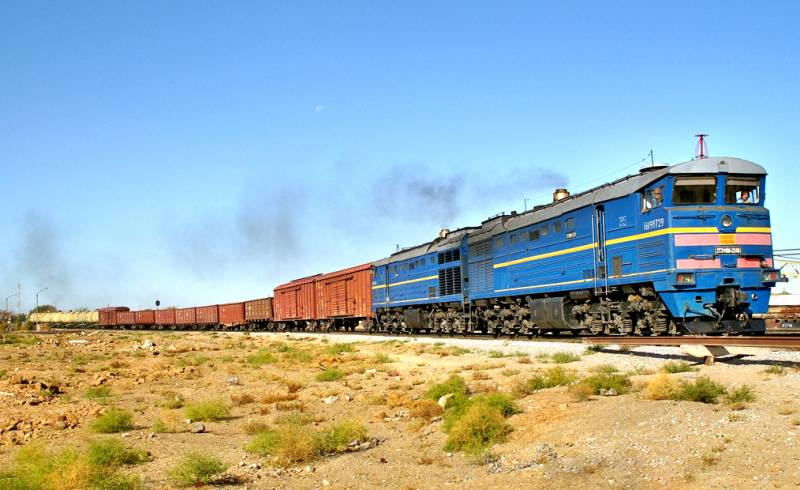 Beijing continues to increase its influence in the post-Soviet space. After two decades of approvals and delays, the project for the construction of the China-Kyrgyzstan-Uzbekistan railway was activated. This initiative of the Celestial Empire is very ambiguous.


In general, the project fits into the general concept of “One belt - one way”. The Chinese leadership rightly fears that in the event of a complication in relations with Washington, its sea trade will be blocked, therefore, it is building alternative land routes to the main markets. The shortest railway route to Europe from China lies through the territory of Kazakhstan and Russia. The main problem is the relatively low throughput of BAM and the speed of movement of goods.

In principle, it should be solved by an alternative highway through Kyrgyzstan and Uzbekistan further to Turkmenistan, Iran, Afghanistan and Turkey with access to Europe. The path is not long, and there are problems with some transit countries. For example, the Kyrgyz authorities were opposed to switching to a narrower gauge from the Soviet standard. In exchange, Chinese lobbyists promised Bishkek a guaranteed income from transshipment of goods in the amount of $ 200 million per year. However overall economic the expediency of this route bypassing Kazakhstan and Russia is in doubt. Thus, an expert on infrastructure issues in Central Asia, Kubat Rakhimov, explains:

There can be no talk of any transcontinental rail transit from China to Europe through Kyrgyzstan. Think about it, there will be eight state borders on the route, two wheel pair changing procedures: first on the Kyrgyz-Chinese border, then on the Turkmen-Iranian border, and two more ferry crossings in Turkey through Lake Van and through the Bosphorus.

Indeed, it turns out a very long logistic leverage and a lot of overhead costs that will make the goods transported, if not “gold”, then “silver”. Moreover, as the expert notes, neighboring Kazakhstan is able to put sticks in the wheels of a competing project, simply by lowering transit tariffs on its own railway network. So simply Nur-Sultan will not give up its positions. At first glance, instead of the “New Silk Road”, something obscure is obtained. But there are other explanations for this initiative.

At first, the railway is a “projection of economic expansion,” as it once was when exploring the vast expanses of America and Russian Siberia. The highway will be built by a Chinese company. The idea was voiced that, in exchange for Kyrgyzstan, Beijing would be provided with the territory and resources of the country for their development for the next 50 years. This information has already caused outrage among the local population and a number of independent experts. If the railway is used not so much for transit to the EU as for the export of raw materials from the countries through which it passes, this can explain a lot.

SecondlyIt’s hard not to see her military purpose. Amid worsening relations with the United States, Beijing is clearly not against “cutting a window” into Iran. Both the PRC and the Islamic Republic can be easily blocked from the sea by the American navy, so the opportunity to acquire land reliable communications between them is worth a lot. Last year, it was reported that Beijing invested $ 280 billion in the Iranian oil and gas sector, and intends to invest another $ 120 billion in its transport infrastructure.

Russia cannot interfere with China in its projects. It remains for our country to observe how the Chinese are increasing their expansion in the post-Soviet space. Moreover, last year Moscow itself allocated 200 million rubles for a feasibility study of the highway route, which was supposed to take into account the interests of both Beijing and Bishkek. Such is geopolitics.
Reporterin Yandex News
Reporterin Yandex Zen
15 comments
Information
Dear reader, to leave comments on the publication, you must sign in.