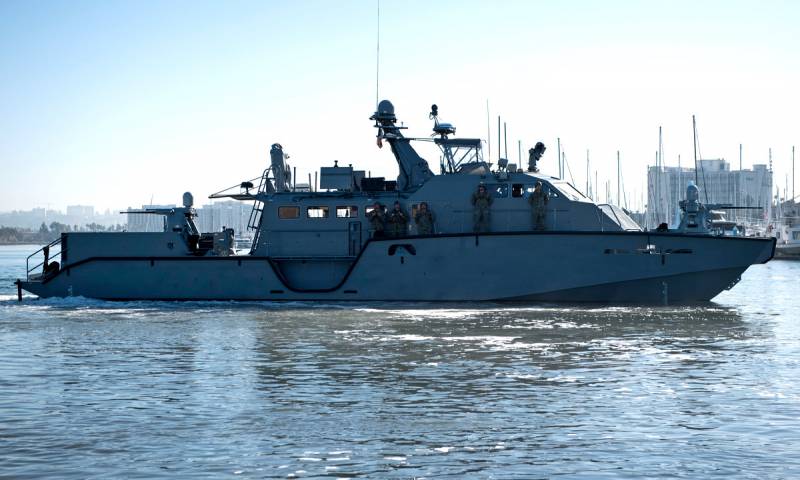 The situation on the Sea of ​​Azov is not changing for the better for Russia. At one step, the Pentagon dramatically changes the balance of power in favor of Ukraine. The USA will deliver to Kiev at once 16 combat boats of the Mark VI type, and this is not some sort of decommissioned junk.


Last April became is known about the intention of the Ukrainian authorities to open a naval base on Azov in Berdyansk. The base was called "East", under it new berths, warehouses, barracks and administrative buildings are being built. It will serve up to 500 people. Initially, it was reported that two-thirds of the 12 boats of the Azov flotilla of the Navy will be Ukrainian-made, and the rest are Mark VI American patrol boats. But now in Washington they decided to sharply increase the number of their small vessels.

“Mark VI” is a modern development, the United States intends to get them in the amount of 48 pieces, and NATO allies are also very interested in them. For the conditions of shallow Azov, this boat is almost perfect. Its displacement is 72 tons, the speed reaches 48 knots. The small ship is heavily armed: two automatic 25-mm gun mounts Mk 38 Mod 2, as well as six 7,62 mm and 12,7 mm machine guns on turrets. In addition, after modernization, small-sized missiles of the AGM-176C Griffin B (Block II) type can be installed on new boats. And this is serious: despite the relatively modest size and short range, these missiles represent a real danger not only for Russian patrol boats, but even for small warships. In the conditions of the Azov puddle, the American Mark VI as part of the Navy can, if necessary, do things.

The first boats will arrive in Ukraine this year, and the full contract will be completed by 2022. Its amount is 600 million dollars, under the contract, training of Ukrainian crews and technical support. Small boats can be easily transported to Berdyansk by land. Together, all this means a new headache for the Russian Defense Ministry.

Yes, “Mark VI” is not like our Black Sea Fleet, but the problem is that its ships are not based on Azov on a permanent basis. The Black Sea Fleet and the Caspian Flotilla are actively engaged in supporting operations in the Mediterranean, supporting our group in Syria. The safety of the Sea of ​​Azov is guaranteed by patrol boats and patrol ships of the Coast Guard of the FSB of the Russian Federation. Russia will have to react to the appearance of an additional threat from Berdyansk by transferring forces from other important sectors, and these resources are not unlimited.

Ultimately, apparently, it will be necessary to create a separate Azov flotilla in order to stop the threat from the "East". In just one step, the Pentagon sharply increased the military spending of the Russian Defense Ministry. And after all, there is no guarantee that the further militarization of the region will stop there.

It should be recognized that the current situation, like the “Kerch Breakthrough”, is a direct consequence of the decisions of 2014. Then, Berdyansk, and the strategically important Mariupol, and Ochakov, where the NATO military base is being built, and Odessa, where American warships are constantly visiting, could, if not become part of Russia, be under its actual control. But what has not been done is not done. Now we have to disentangle, paying an ever greater price for this.
Ctrl Enter
Noticed oshЫbku Highlight text and press. Ctrl + Enter
We are
Putin's phenomenon is Russia's main problem
Ten "defeats" of Putin
Reporterin Yandex News
Read Reporterin Google News
70 comments
Information
Dear reader, to leave comments on the publication, you must sign in.