Is the US eyeing Russian icebreakers? 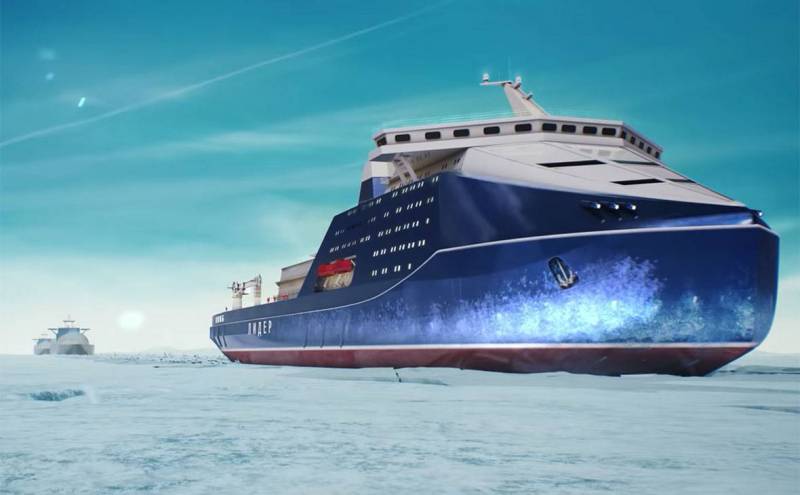 And again we return to the Arctic. US actively embarked on program building your own icebreaking fleet, which is necessary for the development of both poles of our planet. Americans know how to build ships, but many observers were attracted to President Trump’s Memorandum by mentioning the possibility of “buying” an atomic icebreaker. Who did the head of the White House mean: his shipbuilders or the “generous soul”?


Washington unexpectedly found itself in a lagging position on the issue of developing Arctic open spaces. The United States has only seven diesel icebreakers, and the most powerful of them, Polar Star, is also the oldest and literally forced to “devour” parts for the repair of its brother Polar Sea. Back in 2012, the Polar Security Cutter program was adopted, according to which three heavy icebreakers and three medium ones were to be built. The basis of the new American "conqueror of the poles" was taken by the modernized German icebreaker project Polarstern II, which surpasses the prototype in displacement and power.

Everything seems to be fine: there is a contractor, funds have been allocated, but eight years later, President Trump is radically revising the shipbuilding program. Suddenly it became clear that the characteristics of the icebreakers do not meet the new requirements of the US Navy: their capacity is only 33,7 MW, they are subjugated by ice 1,8 meters thick, and the autonomy of ice navigation is only 90 days. For comparison, the shaft power of the Russian icebreaker of the LK-60Ya Arktika project is 60 MW, and they break through ice up to 2,6 meters thick. In addition, our ships have a variable draft, which allows them to walk along the oceans and river beds.

And how can one not recall the promising domestic super icebreaker of the Leader project, which can break the ice cover up to 4,3 meters thick and leave behind a corridor up to 30 meters wide, suitable for large vessels to pass along the Northern Sea Route. "Leaders" should become our "prodigy" on the NSR, opening navigation even in the winter, when it is simply impossible. By 2033, the Zvezda shipyard is expected to launch three icebreakers of this class. The "Arctic" and the "Leaders" will provide Russia with "all-weather" dominance in the conditions of the Arctic Ocean.

It is obvious that Washington is no longer "seasonal" diesel-electric icebreakers. USA have the necessary Technology and able to build icebreakers, but they do not have experience in creating nuclear-powered vessels of this class. If you literally understand Trump’s statement about the possibility of "buying", then the icebreakers are also built by their allies from Canada and Finland, but they also do not make nuclear powered ships. China, showing interest in the Northern Sea Route, has recently begun construction of its first nuclear-powered icebreaker, suspiciously similar to the Russian Arctic. As a matter of fact, Russia and China are the very same potential suppliers for the needs of the US Navy. One can reasonably argue here, but what about our dominance in the Arctic, why do we give icebreakers to the Americans ourselves?

That's right, but we, unfortunately, do not have an exclusive monopoly on this region: other countries also have the legal right to use the Northern Sea Route as an international transport artery, and there are no ways to prevent this, except for the military. The only source of funding for Arctic programs is the federal budget, which has become "worn out" due to all kinds of "oil" and "gas wars", sanctions, the coronavirus pandemic, etc. Already when Russia took upon itself additional quotas for oil production in the framework of the OPEC + deal, it was said that new resource projects in the Far North would be called into question. At the same time, the Russian government confirmed its intention to gain a foothold in the region:

It is necessary to continue the development of a fleet of powerful modern icebreakers. This is an important and necessary work for the country.
It is worth recalling that one icebreaker of the Leader class is estimated at 127,5 billion rubles, it is possible that the final cost will become even greater. Dear pleasure. It seems, perhaps, incorrect that the further development and division of the Arctic will take place as part of the most unexpected alliances. We won’t be very surprised if the new domestic atomic icebreakers, with the permission of the government on a leasing program, then float to the West, where they will serve the American and international polar stations announced by President Trump. Money doesn't smell, right?
Reporterin Yandex News
Reporterin Yandex Zen
7 comments
Information
Dear reader, to leave comments on the publication, you must sign in.