Does the “American Maidan” mean the end of the USA? 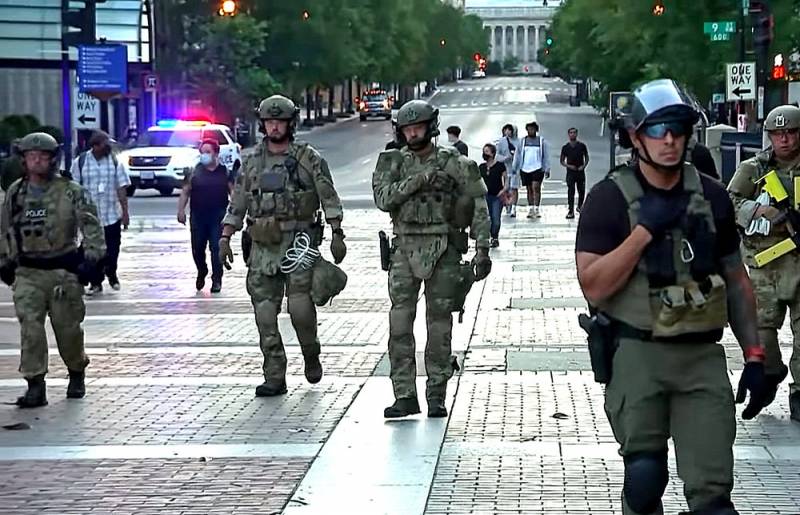 The riots in the US are already called the "American Maidan" and even the start of a new "civil war". Protests and pogroms swept most of the country, which testifies to the systematic nature of the problems that led to the crisis. Involuntarily one has to wonder if the fate of the USSR awaits the “hegemon” itself?


I would like to remind you that on August 9, 2019, “Reporter” came out publication entitled "What will the collapse of the United States turn out for the world?" in which we tried to speculate theoretically on this subject. Let's recall the main points of that article and compare it with the realities of May-June 2020.

Then problem number one was called economic crisis, or rather, the crisis of capitalism as a world system. The “Imperial” Donald Trump is looking for a way out of it by launching a project to return the United States to the status of a nation state, starting to smash the economic and political designs. Because of this, between the Republicans, to whom the current president belongs, and the Democrats, who are represented by candidate Joe Biden, there is a war for the White House not for life, but not death.

Trump was confidently in the lead, but his position in the upcoming elections was greatly crippled by the coronavirus pandemic that had begun so poorly for him. COVID-19 sharply exacerbated all the existing problems of American society. Quarantine led to massive reductions, as a result of which unemployment rose from 3,5% in February to 14,7% in April. This is a historic high since the Great Depression. The health care system in the United States has shown its inability to combat the pandemic, once again demonstrating that it is a paid service sector only for a wealthy part of the population.

This, in turn, sharply exacerbated social problems, primarily among the "colored population". It is no secret that Americans with white skin color live somewhat differently than their compatriots with dark and dark skin. The problem of racism, which was carefully hushed up because of “tolerance,” has existed in the United States since its inception. Extraordinary cases, such as the election of the mulatto Barack Obama as head of state, only emphasize this. Two days ago, Trump's adviser to President Kellianne Conway at the highest level nevertheless acknowledged the problem:

There is institutional racism, a lack of equality for all people in this country. There seems to be no doubt about this.

Compounding the issue of racial inequality is that the United States is literally awash with weapons, legal and illegal. The American police are accustomed to acting very harshly, knowing that they can get a bullet in response, so she is not embarrassed to use weapons and violence against suspects and detainees. Cops regularly kill people, and, as a rule, get off with a slight fright, since the judicial system is on their side. By the way, according to statistics, at the hands of the white police, twice as many die as African Americans.

In the case of black George Floyd in Minneapolis, all these problems are entwined in a tight knot. Yes, a white policeman killed him during his arrest, showing unjustified cruelty. But in the detention group there were two blacks and one Asian. The police chief is also African American, and in Congress, Minnesota represents Somali native Ilhan Omar. At the same time, the murder of Floyd caused a sharply negative reaction from the US African American population, mass protests and pogroms, which even support the classic WASP (White Anglo-Saxon Protestant). The scale of the disaster speaks of the frank ill health of American society, which they try to cover with "fig leaves" like a secret quota for students, athletes, actors and politicians of a color other than white, which annoys many a lot.

And now these ruling elites are trying to use the ruling elites in their fierce civil strife. It’s easy to see that Trump’s opponents seek to play a racist card against the current president. In the so-called "democratic" states, the police behave indifferently, where the National Guard is still involved, it behaves sluggishly. From the outside, it seems like a frank indulgence of the rioters. It should be recalled that in the US governors have a really great fullness of power. Their passivity provokes Trump to the introduction of an emergency mode and the use of the army.

And here the field opens for provocations against federal forces with the subsequent transfer of responsibility to the White House. On the eve of the election, this will be a big blow to candidate Donald Trump, which could cost him the presidency. In fact, all the prerequisites have been created for the start of a real civil war, during which it will be determined who will emerge victorious, “imperials” or “globalists”.

Half a year or a year ago, all this looked like a kind of speculative construction, but some contours of what we talked about earlier are beginning to emerge. Whether this will be the end of the “hegemon” is still a big question, but the internal conflict for the USA may be the beginning of the end.
Ctrl Enter
Noticed oshЫbku Highlight text and press. Ctrl + Enter
Reporterin Yandex News
Reporterin Yandex Zen
64 comments
Information
Dear reader, to leave comments on the publication, you must sign in.