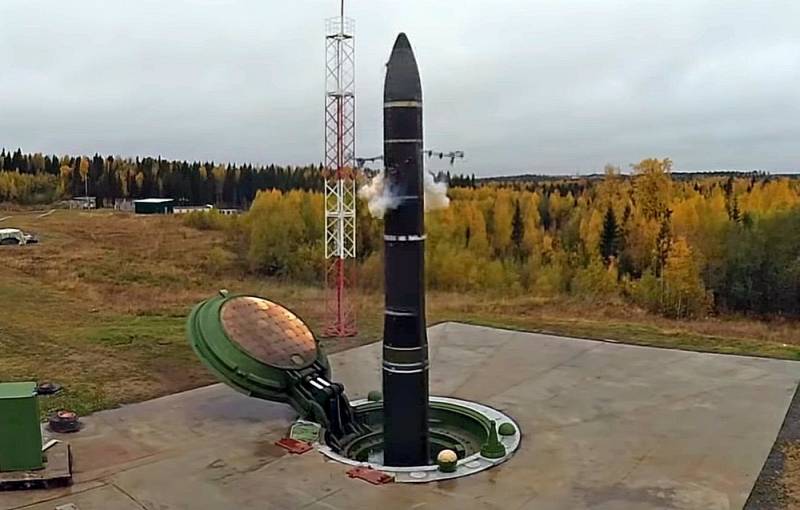 President of Russia Vladimir Putin approved and approved the most important document not only for our country, but for the entire planet: Fundamentals of State policy Russian Federation in the field of nuclear deterrence. Domestic media quite widely reflect this event, and often without focusing on the most important thing: the new doctrine not only openly declares Russia's intentions and principles regarding the use of the deadliest weapons of the existing on Earth.


In an extremely concentrated form, it reflects all those global changes that have occurred in our country and the world over the past decade. Which ones? Let's try to figure it out.

Let's remind - the previous similar document was approved by the then President of the country Dmitry Medvedev on February 2, 2010 together with the Russian Military Doctrine. In fact, this was happening in a completely different Russia and in a completely different world. Before the coup d'état in Ukraine, which at that time, having moved away from the consequences of the first "Maidan", was turning into a friendly state again, there was another 4 years. The same amount remained until the "Crimean Spring", the start of the war in Donbass, global economic Western sanctions that followed. Ahead was the formation of a united anti-Russian front led by the United States, which aims to break our country, "put in place" and "break ambitions" to return Russia to the number of world powers.

The Cold War, the arms race, the open confrontation of the "big" states in the theaters of local military conflicts - all this seemed to be a collection of dusty "skeletons" in the tightly closed "closet" of History, from which they are unlikely to ever get out. As it turned out, it was either tightly closed, or the sinister ghosts of the past turned out to be much more tenacious than everyone thought. The confrontation that has unfolded in the world between those who arrogantly believing themselves to be “omnipotent”, still wants to see him as “unipolar,” and those who no longer want to put up with such a situation are becoming more acute. It is completely possible that it can reach the “hot” phase, which implies the use of military force. And it’s very good that the Kremlin understands this quite clearly. A significant difference regarding the new edition of the Fundamentals is that, unlike the past decade, they are published in an open source - on the domestic official portal of legal information. What is this - another warning made to the enemies of our country? Most likely, this is how the situation should be perceived.

The previous similar document remained “closed” to the general public, so changes can only be judged by paragraph 22 of the Military Doctrine of Russia, signed by Dmitry Medvedev at the same time and subsequently made public. It dealt with only two reasons why our country can use nuclear weapons: if it is hit with weapons of mass destruction (not only atomic, but also other types), or in case of an attack on Russia with conventional weapons, but having such a scale that they call into question the very existence of our state. In the Fundamentals, approved by Vladimir Putin, the list of precedents under which all the enormous power of the "nuclear triad" protecting our homeland can be used is expanded to four. This, again, is the use by the enemy of any types of WMD in our territory, or the receipt of reliable information by the relevant defense structures that the launch of ballistic missiles aimed at our country or its allied states has already been carried out.

The paragraph on the “ordinary” war, but waged by such forces and means that make it clear: the issue is the complete destruction of Russia, also remained valid. The only thing that can be considered as innovation is the clause that the basis for delivering a crushing blow to the “decision centers” could well be the command given from these centers to produce Russian military or government facilities that are of “critical importance” to the country and its security, which can lead to their failure. First of all, this paragraph applies to any enemy attempts to destroy or even temporarily “neutralize” the country's nuclear forces. However, this part of the Fundamentals cannot be called a special sensation - similar warnings have been voiced by the relevant official representatives of our country more than once at various levels.

What are we responding to?

Without a doubt, the last of these points refers to threats repeatedly voiced by senior US military and politicians regarding the possibility of conducting cyber attacks on various infrastructure facilities in Russia. Moreover, the “reasons” and grounds for such aggressive actions were each called one more absurd than the other - like “punishment for interfering in the American election”, no evidence of which was ever presented. Such completely far-fetched claims are rejected even by many sensible people in the United States themselves, but this does not mean that anyone in the Pentagon cannot be tempted to take the opportunity to carry out a “special operation” and disrupt the functioning of, for example, infrastructure responsible for the livelihoods of one of the largest cities in Russia.

The only restraining moment here really can only be the threat of an immediate retaliatory strike, which will be delivered without any pity for the enemy. It should be noted that the United States and its NATO allies have recently literally pushed Moscow to make extremely tough defense decisions. In the document we mention, as the main dangers today threatening our Fatherland, it is not without reason that quite specific things are mentioned that have the most real incarnations. “The deployment of nuclear weapons on the territory of non-nuclear states”? This is directly in line with the recent provocative initiative of the US ambassador to Poland, Georgette Mosbacher, that Warsaw could very well “take to stand” American warheads and bombs aimed at our country.

The "uncontrolled spread" of the deadliest weapons? In this regard, it would be quite appropriate to cite the example of Israel, which is an official state that seems to have no atomic weapons, but in reality has long possessed both itself and more than effective means of delivery. So, in May of this year, the IDF conducted another marine test of the LORA ballistic missile system, capable of hitting targets at distances of 100 and 400 kilometers. Where is the guarantee that these missiles (possibly equipped with a nuclear warhead) will not strike one day, for example, at the positions of our military contingent in Syria or at Russian military bases located in this country, which Tel Aviv considers to be a “legitimate target” for launching bombing missiles? As for the potential enemy building up “large military forces of general purpose” at the borders of our country, there is nothing to talk about. NATO’s “largest in history” military maneuvers, which are clearly testing exercises to attack the western borders of our country, Washington’s enhanced armament of Poland, which does not hide its own anti-Russian aggressive plans ...

Add to this the extremely disturbing activity of the US military in Ukraine, which they are directly pushing for an armed confrontation with our country ... Continuous recent provocative demarches in the Black Sea, often organized under the guise of the same exercises, each of which in fact can to be the beginning of military aggression - and what do we get? Full compliance with this item. Separately, it is worth mentioning the defiant behavior of one of the main nuclear powers of the world - the United States. Over the past couple of years, Washington has dismantled virtually the entire international security system, from the INF Treaty to the Open Skies Agreement, and is now "trying" to put an end to the latest treaty that restrains their aggressive encroachments - OSV-2. If this is not preparation for a war against us, then what should be considered ?!

One of the most worrisome moments in the military and state leadership of Russia is also the “deployment of space of strike systems and missile defense forces”, which, in fact, can be used by the enemies of our country as a tool for a “preemptive strike” to incapacitate domestic nuclear forces containment. The creation of the Space Command by the Pentagon and the regularly announced development of appropriate types of weapons, which, apparently, are planned to be put into low Earth orbit, leave no room for doubts about Washington’s intentions and plans in this strategically important and extremely dangerous threat to Russia's security. Of particular note is the recent “reservation” of Donald Trump, who, as you know, regularly appears in the “language” that people who are somewhat more sensible prefer to keep silent for the time being. The reaction of the head of the White House to the launch of the manned spacecraft Crew Dragon has alarmed even many Americans. What his words testify to: “We will fly to Mars, and we will have the greatest weapons that can be imagined in history” ?! Such statements do not just make you think - they scare, because they are not expressed by anyone, but by a person who holds a “nuclear suitcase” in his hands, which has a huge number of deadly US warheads.

The "Fundamentals of the State Policy of the Russian Federation in the Field of Nuclear Deterrence" repeatedly mentions that our country considers the use of such weapons to be an extreme measure, which only the most exceptional and critical circumstances can force. However, it also says that “unacceptable damage” with the use of absolutely all types of weapons that the Russian army possesses will be done to the enemy, who dared to check the strength of our defense, absolutely guaranteed, “under any conditions of the situation.” Actually, this warning is the main meaning of the document, the main purpose of which is not to “scare” anyone, but, on the contrary, to prevent the nuclear Apocalypse threatening the world today.
Ctrl Enter
Noticed oshЫbku Highlight text and press. Ctrl + Enter
We are
Putin and Lavrov have done their job. General Shoigu, your way out!
Ten "defeats" of Putin
Reporterin Yandex News
Read Reporterin Google News
22 comments
Information
Dear reader, to leave comments on the publication, you must sign in.