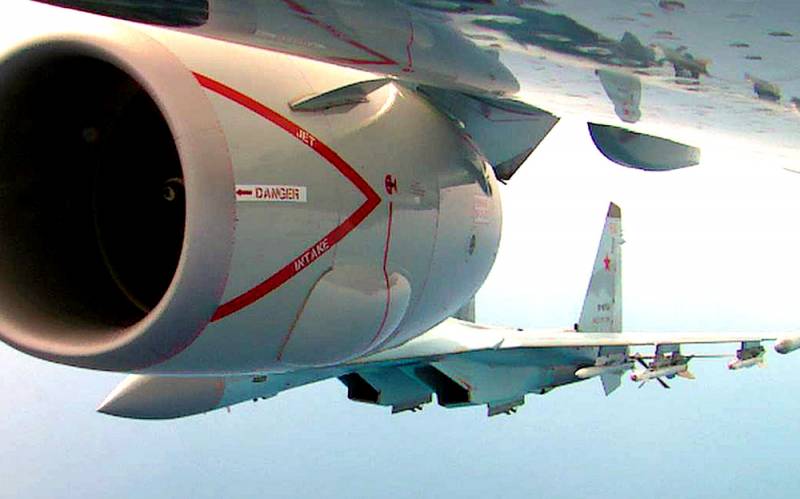 According to the US 6th Fleet, on Tuesday May 26, two Su-35 Russian fighters “in dangerous form” intercepted the US Poseidon P-8A patrol anti-submarine aircraft over the waters of the Mediterranean Sea, off the coast of Syria. This is reported by the American edition of The Drive, which publishes on its website a video of "dangerous interception."


According to the United States Navy, Russian planes flew on either side of Poseidon for 65 minutes:

On May 26, 2020, a US Navy P-8A aircraft flew over international waters in the eastern Mediterranean and was intercepted by two Russian Su-35s, flying 65 minutes in the immediate vicinity of Poseidon. The actions of Russian fighters were recognized as dangerous and unprofessional due to the fact that the aircraft of the Russian Federation were at a close distance from the wings of the P-8A at the same time, reducing the ability of the P-8A to safe maneuvers
- The report says the US military.

The Drive also points to the routine of “unprofessional and unsafe” interceptions by US fighters of US aircraft in Europe and elsewhere in the world. They are so “ordinary” that the US Navy even designed special cameras for its EP-3E Aries II air reconnaissance to collect data on such incidents.
Ctrl Enter
Noticed oshЫbku Highlight text and press. Ctrl + Enter
We are
The United States organized a total surveillance of the western borders of Russia
USA intensified aerial reconnaissance near Crimea
Reporterin Yandex News
Read Reporterin Google News
5 comments
Information
Dear reader, to leave comments on the publication, you must sign in.