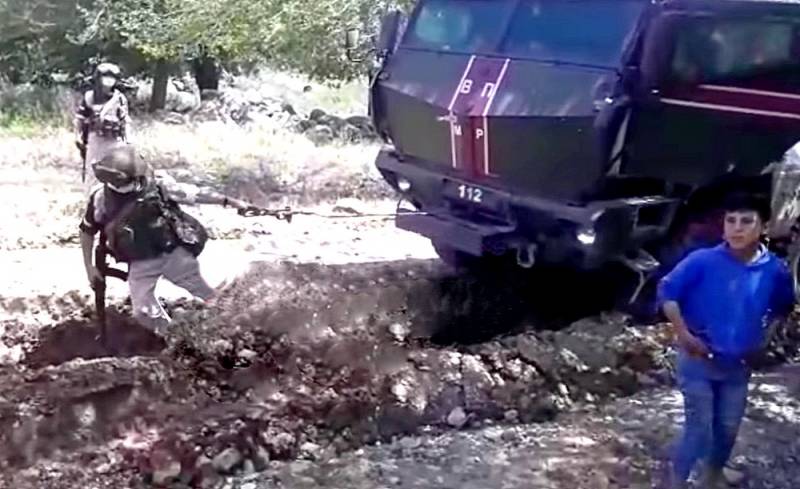 Syrian dirt and impassability become legendary. Armored vehicles of military patrols of various countries of the world continue to regularly get stuck there.


Recently in Syria stuck MRAP Oshkosh, cross-country, US Army. He “dug in” so deeply that he couldn’t get out on his own and his colleague pulled him out of an American convoy on a rigid hitch.

And before that, in Syrian mud stuck Russian armored car "Tiger" and BTR-82A. They overestimated their capabilities, trying to go around the Americans, blocking the road. Then the Russians were pulled out by the powerful Typhoon-K armored truck that came to the rescue.

And now, it was the turn of the Turkish military, or rather their armored vehicles. It became known that in the north-east of Syria in the province of Hasek, in the area of ​​the settlement of Al-Muabbad, the Turkish MRAP was stuck. After that, the Turks had to call for Russian help.

The Russian armored truck Typhoon-K came to the aid of the Turks. He pulled out a hopelessly stuck Turkish armored car from the mud captivity. The Turks explained that they had to turn off the road, as the Kurds blocked it, creating a semblance of a barricade.


It must be recalled that Russia is the only country that acts legally on the territory of Syria, i.e. at the official invitation of the government of this country. All other “guests”, represented by Turkey, the USA and a number of other countries, act illegally, violating international law.
Reporterin Yandex News
Reporterin Yandex Zen
1 comment
Information
Dear reader, to leave comments on the publication, you must sign in.