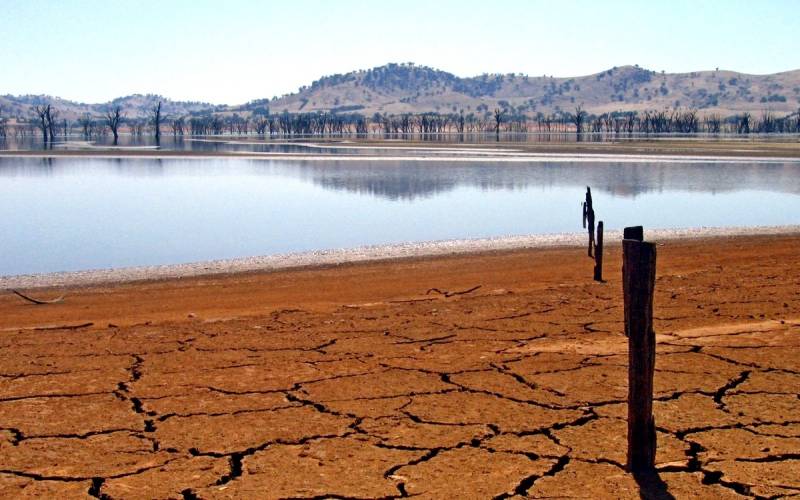 Apparently, the gloomy begin to come true forecasts about the arid summer 2020. As you know, where it is thin, it breaks there. The first and most obvious victim is the resort Crimea, where for 6 years they have not solved the problem of its reliable water supply.


Now the leadership of the Republic only has to do this, that it is to raise its eyes to the sky and ask him for rain.

The situation is very serious. After Ukraine closes the North Crimean Canal, the peninsula is forced to rely only on its own water resources, and with this, the further, the worse. The water extracted from numerous dug artesian wells is saturated with minerals and gradually saturates the soil with salts, making it barren. Due to the abnormally warm winter, there was no snow in the Crimean mountains at all. Precipitation in places reached 96%.

As a result, a catastrophic shallowing of rivers and reservoirs is already observed. The total volume of water in all reservoirs of the peninsula is two times less than a year ago, amounting to about 100 million cubic meters. And he continues to fall. A month ago, Governor Aksyonov warned that there would be enough water for Simferopol for only 3,5 months. When the first rainfall fell on Easter, the head of the region crossed himself on camera:

Thank God we were heard! This is God's providence, in good time.

But since then there has been no more rain. The water level in the reservoir that feeds the capital of the region drops on average per meter per day. Not better is the case in Sevastopol, whose Chernorechenskoe reservoir is already half shallowed. If forecasts of abnormal heat in the coming summer, which will increase evaporation, come true, a real catastrophe can occur.

This is not an exaggeration. As you know, Crimean agriculture was seriously affected due to the cessation of water supplies from Ukraine. Now the remaining gardens and vegetable gardens can dry. So, the authorities of Sevastopol have already warned representatives of horticultural cooperatives about switching to an economical regime for an indefinite period. And the problem is not only the threat of losing crops, which will be extremely painful for Crimeans under quarantine restrictions. It is no secret that in these dachas and gardens there are a significant number of tenants who have come to relax with their families at a Russian resort in the conditions of restricting travel abroad.

Together, all this provides a breeding ground for discontent and mass protests of the population. The problem is that it cannot be solved by magic. Talking about laying a water pipe from Russia to Crimea or building desalination plants using nuclear reactors (for example, those used on nuclear submarines) has remained talk for six years.

Two years ago, in the north of the peninsula in the city of Armyansk, the Titan enterprise caused a fresh water shortage due to a real environmental catastrophe with the release of a large amount of acid fumes into the atmosphere. Now the authorities intend to solve the problem of water supply in Simferopol at the expense of the resources of the Ivanovo and Vilinsky water intakes. According to experts, the village of Vilino is located almost on the coast, and the intensified pumping out of fresh water can lead to sea subsoil horizons. And this is another possible environmental disaster in addition to the emerging socialeconomic.
Reporterin Yandex News
Reporterin Yandex Zen
92 comments
Information
Dear reader, to leave comments on the publication, you must sign in.