26 May 2018
3
The opening of car traffic on the Crimean bridge was a historic event for all Russians, and especially for residents of the Crimea. After all, it was built not only for guests of Tauris, but also for Crimeans who want to see how people live on the other side of the strait, on the “mainland”. 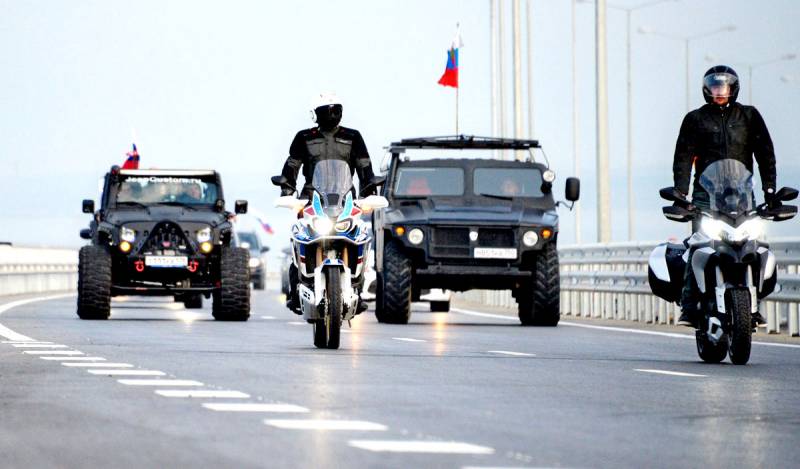 And in the first five days of the Crimean bridge, it became clear that of the 90 thousand cars that drove over the bridge during this time, about half belonged to the Russians traveling to Crimea, and the other half belonged to the peninsula who were interested in driving along the new bridge and visiting the blessed Kuban.

After the bridge was built, the need to stand in a long line for the ferry to cross the strait disappeared. And the ferry does not work in stormy weather. Now you can slowly, for a maximum of half an hour, get from the Crimea to the Krasnodar Territory.

And having got to the "mainland", some of the Crimean residents even doubted whether Crimea had really become Russian? The contrast between Crimean life and the conditions in which the Kuban live is too striking.

For some reason, prices in the Kuban were lower, and roads are better. Here, even in villages remote from major cities, the roads are in excellent condition. Prices for gasoline and diesel fuel are much lower than in the Crimea. It’s just as in the old “yellow-black” times, to go across the border almost on an empty tank in order to refuel with cheap Russian fuel.

Svetlana from Kerch, after opening the bridge, decided to visit Anapa on the other side of the strait. She was amazed at the low prices of products. It seemed surprising to her to pick up a full cart in a supermarket for 5 thousand rubles. She made a real shopping trip, "stocked up" with products, things for herself and her husband.

Kerch walked along the flowering embankment of Anapa, involuntarily comparing it with the Kerch squalor. In the city they met many friends who also came from Kerch.

So here he is, Crimea!

In the first days after the bridge was opened, cars poured over it from all regions, but most of all, probably, there were cars with Krasnodar license plates. Many of them were decorated with colored balloons and tricolors.

Since it is forbidden to stop and take pictures on the bridge, many took selfies on the background of a stele with the inscription Kerch. The guests were amazed how everything is running. It seems that local authorities did not wait for the guests, because they can bring good money to the city budget.

People saw the deserted embankment, the broken roads, the unfinished and filthy seaport. The lack of portable trade and the lack of public toilets were striking.

Some of the guests of Crimea rode here on the maps of the navigator, which led them not to the bridge, but to the old ferry. Someone did not return, but sailed the old route, although this is an expensive pleasure.

Speaking of prices. If you go by public transport, then the prices remain the same, although now carriers do not pay for ferry crossings, but travel along a “free” bridge. It turns out that the distance from Kerch to Simferopol and to Krasnodar is approximately the same, and passage through the strait is approximately twice as expensive.

Now the Crimean leadership is at a crossroads, like a fabulous hero. After all, the comparison of the native peninsula with the rest of Russia became available to the inhabitants of Crimea, and it is not in favor of the Crimea. And now the authorities of Tauris have only two options: either close the bridge for Crimeans so that they see less, or begin to improve the peninsula in order to gradually smooth out this contrast.
Ctrl Enter
Noticed oshЫbku Highlight text and press. Ctrl + Enter
We are
Ukrainian drove along the Crimean bridge and recorded an appeal to fellow countrymen
Choke: Crimea is not ready for the opening of a new bridge
Reporterin Yandex News
Read Reporterin Google News
3 comments
Information
Dear reader, to leave comments on the publication, you must sign in.